Founded in 1936, the Cartersville (Georgia) Church of God has grown slowly but steadily, and in January, 2003 moved to a new campus at Liberty Square, rechristening the church to reflect the new facility.

The 1,700-seat sanctuary is a modern fan-shaped auditorium with high ceilings and an open seating arrangement. But despite its pleasing aesthetics, the room’s acoustics have been an ongoing challenge, and the original audio system had long struggled with inconsistent coverage and poor intelligibility.

“There was a tremendous change in tonality from the main floor to the balcony area,” explains Kent Morris, principal of Canton, GA-based Cornerstone Media Group. “The main floor was very bright – almost excessively so in some areas – while the balcony seats were getting almost no high frequency content. The mix position is located in the balcony area, which made it very difficult for the tech team to mix.” Morris adds that the old system also created a visual impediment for some of the balcony seats.

“We looked at a number of different options, and they were won over by the VARIA system,” says Morris. “Their technical director Nathan Roach and audio head Ben Tomlinson are very astute, and the fact that VARIA enables you to taper the coverage pattern was a key factor for us. It really provided the most consistent tonality, with no harsh spots and no dead zones.”

Lead programmer Jeremy Alison was able to map out consistent coverage to the room’s most challenging areas. “With the VARIA, we were able to get articulation to the back rows of the balcony, and great coverage under the balcony as well, without having to add near fields or under balcony speakers,” says Morris. VA15S and PN212 subwoofers add low frequency power and punch, and three CF61 compact two-way boxes provide front fill.

“Being able to select among several boxes with different coverage patterns, and particularly being able to choose transitional boxes in between the fixed ones, makes a tremendous difference in designing a system,” he adds. “It’s almost as if every box is custom, but you don’t have to wait six weeks or pay top dollar.”

The entire system is networked via Audinate Dante over Ethernet, with several manufacturers’ technologies “playing nicely” together.

“We installed a Yamaha CL5 console at FOH, connected via Dante to two Rio stage boxes,” says Morris. “That enabled us to add a monitor console down on the floor and tie it all together with RHAON so they can monitor from FOH. We also added some devices to their existing Media Matrix NION system. Once we worked through the usual clocking issues, the system functioned flawlessly. You expect a lot of hair pulling, but it was so easy. It all worked out beautifully.”

“The VARIA system has really been an ideal solution for the church,” he concludes. “It’s a great looking system, and the cost factor and configurability made it a great fit. I just love working with Renkus-Heinz.” 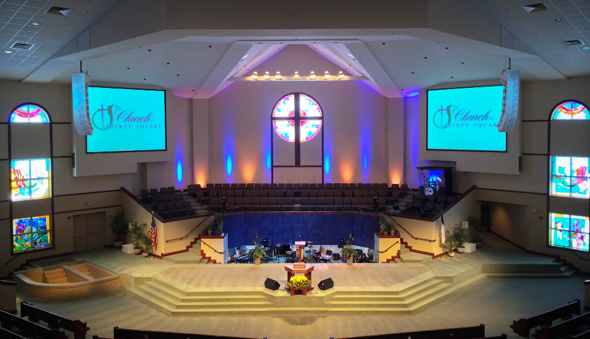