The Box Garden At Legacy West Equipped With VUE Audiotechnik

Live work play neighborhoods aren’t necessarily a new phenomenon, but as Millennials enter their “adulting” years, developers are responding with a high-tech rethink of urban living for the “walking distance” generation.

Located in the heart of Plano, Texas, Legacy West is a fully modern take on the mixed-use model, combining residential, retail and hotel accommodations, with a 55,000 square foot dining and entertainment hub complete with a new sound system from VUE Audiotechnik.

According to NED’s principal audio designer/consultant, Alan Edwards, the perfect audio system for The Box Garden needed to deliver on three fronts. “First, Legacy Hall wanted to attract top-tier talent, so sound quality had to be on point,” explains Edwards. “In addition, because this is a semi-outdoor venue in the middle of an urban development, we needed to keep the sound tight. Finally, the system had to be weather resistant with strong rigging options to resist wind loads.” 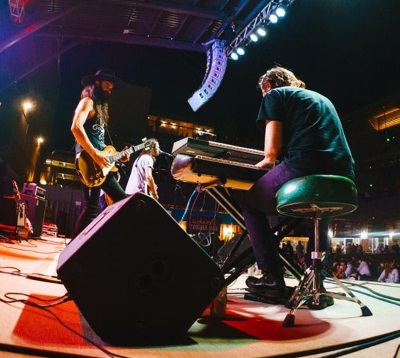 NED’s design is based around the VUE al-8 Acoustic Linearity line arrays with additional VUE models deployed throughout the venue for extended coverage and low-frequency support. “VUE offers a broad mix of loudspeaker options with very consistent voicing across the families,” he explains. “I really appreciate being able to address a lot of different spaces with a single brand, while being fully confident that sound quality will be exceptional, regardless of size.”

The final configuration consists of dual al-8 arrays of ten elements each. A total of four VUE as-215 dual 15-inch vented subwoofers are located under the main stage for low-frequency support, while front and side fill comes courtesy of four VUE i-2×4.5 low-profile full range speakers mounted underneath the stage lip, and two a-15 full range speakers, one on each side of the stage. Four VUE a-10 full range systems serve delay duty. Five VUEDrive V6-I systems engines provide amplification and system processing for the line array.

Legacy Hall’s broader high-tech build-out took nearly a year to complete, with The Box Garden’s audio and lighting systems just one part of a much bigger project. With little room for unexpected complications or delays, FSG technology project manager Peter Hensley gives VUE high marks for keeping it simple. “I had not worked with VUE prior, but I’m really impressed with the product and the team in Escondido. From ordering and shipping to working with our structural engineer on the rigging, the entire VUE team was really helpful and the whole process was very smooth.”

It wasn’t just logistics that stood out for Hensley, VUE sound quality made a distinct impression as well. “The al-8 went up really easy and sounded amazing from the moment we turned it on with almost no tweaking. You can hear every aspect of the sound in detail and there’s a noticeable difference in the range over other systems. Output was exactly as predicted – very controlled and exactly where we expected it to be. I’ve already started recommending VUE to other clients.”

Legacy Hall has been open for business since May 2018, and The Box Garden’s growing popularity is already drawing high praise. “I’ve received a lot of positive feedback from visiting engineers to guests and management alike,” says Edwards. “I’m not surprised. The al-8 line array required less than three filters to get it perfect in the Legacy West venue. It’s clear to me that VUE understands the value of getting it right at the cabinet level, then using DSP to simply augment, rather than as a fix for a bad design. Put simply, the al-8 is really impressive.”