Tannoy Qflex Provides Intelligibility For St. Barnabas On The Dessert

Built in 1960 under the direction of noted architectural firm of T.S. Montgomery, the 350-seat sanctuary features columns and arches, a high ceiling, and a raised circular altar with choir risers and a pipe organ located directly behind it.

CCS Presentation Systems, also located in Scottsdate, was tapped to design and install the new sound reinforcement system as well as significant lighting and video upgrades.

“The sanctuary was originally designed to have the acoustic principles and characteristics of larger cathedrals,” explains Rod Andrewson, who serves as chief engineer at CCS Presentation . “As a result, it’s a highly reverberant space that had been plagued with vocal intelligibility issues for decades. Over the years a number of acoustical treatments had been applied in an attempt to resolve the problem, with little to no success.”

The system project was part of a complete renovation of the sanctuary spurred by the donation of a new organ. As a result, church leadership wanted worship services to feature organ music, but they also wanted a system to deliver dramatically improved vocal intelligibility.

“After we viewed the church we were told that the sanctuary would be stripped of all acoustic treatments and I knew we had a real challenge on our hands,” Andrewson notes. “As a matter of fact I contemplated not having anything to do with the project at all. But before walking away, I wanted to do a little research.”

He had successfully implemented Tannoy Qflex digitally steerable arrays in other applications, and thought they might provide a solution in this application. The straightforward goal was focusing as much sonic energy on the audience as possible while keeping it off of reflective surfaces.

Qflex loudspeakers have an extremely slim profile, and the cabinets and grills can be painted, which was another plus for the project. The church wanted the new system to be as unobtrusive as possible. After the church leadership heard a demonstration of the Qflex arrays in the sanctuary they were extremely impressed.

“We showed them that we could very precisely divine and steer the acoustical imprint on the audience,” Andrewson explains. “When we demonstrated the Qflex loudspeakers and VNET software to our client, it was very clear that none of our competition had even considered doing the same. I think that demo was, hands down, what won us the job.”

The system design features two Qflex 40 self-powered loudspeakers mounted on left and right columns about 20 feet in front of the alter, the best option available to covering the majority of seats. Each loudspeaker, measuring 83 inches high by just seven inches wide, is loaded with eight 4-inch LF drivers, sixteen 3-inch LF drivers and sixteen 1-inch HF drivers. Every driver has its own discrete amplification channel.

A key part of the equation is VNET, Tannoy’s proprietary digital processing and network protocol, hosted on a PC located in the system’s rack room which can be found behind the back wall of the sanctuary. VNET is linked to the loudspeakers via a VNET USB and RS232 interface.

With VNET, both main loudspeakers are acoustically profiled and individually optimized, taking into account their exact positions within the venue relative to the room boundary and acoustic properties of the room.

A control panel allows VNET parameters to be viewed and adjusted, including overall system status as well as specific component performance parameters. while the control area provides access for adjustment of all loudspeaker DSP parameters including crossover/delay, EQ, gain and power.

While the Qflex/VNET tandem handle the vast majority of coverage needs, there are still a couple of regions requiring support.

Tannoy Di5 compact loudspeakers are discretely mounted left and right (and also painted to match) to provide coverage to the narthex in the very front area. Two more Di5s, also column mounted, are utilized to extend coverage to the choir, which is located behind the alter, with one more for the pulpit for “preview and confidence”.

“Designing a system for a reverberant space with no acoustic treatment allowed is outside the norm, but made possible with Qflex,” concludes Andrewson. “The church members and leadership are extremely pleased with the end result.” 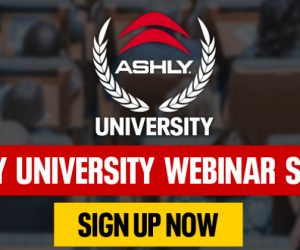 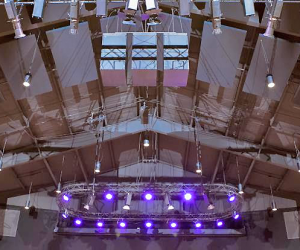 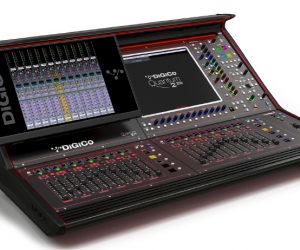 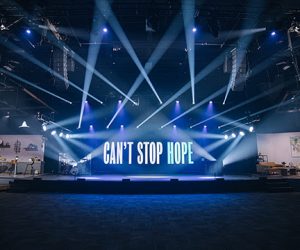 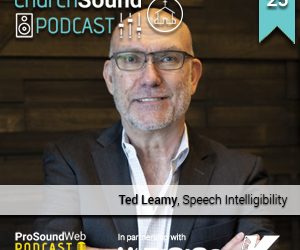 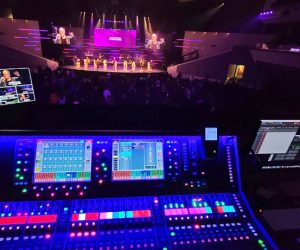 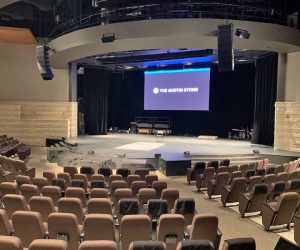