Karrie Keyes enjoyed a unique view of the 1980s-90s punk rock scene as well as the rise and evolution Pearl Jam, one of the more popular groups of the past 20-plus years.

In fact, I recently caught up with the noted monitor engineer during a break on the band’s current tour, which finishes up later this month with dates at Fenway Park in Boston and Wrigley Field in Chicago.

Keyes’ career also includes live mix work with RHCP, Fugazi, Sonic Youth, solo projects by Pearl Jam lead vocalist Eddie Vedder, and briefly with Neil Young, among others. Although based in California for most of her 30-year career, she also lived in Seattle briefly during the height of the Grunge era. Eventually, though, she says she’d like to work out of New Orleans.

“I’m trying to make that work,” the 48-year-old engineer says. “My kids are almost out of the house and I’d like to be doing more, possibly one-off work, when Pearl Jam’s not touring.”

Making A Change
Born and raised in Los Angeles, Keyes fell into audio by chance, she says, although she’d always gravitated towards arts and music as a teenager. “I played flute and clarinet from 4th grade through my two years of high school, but I didn’t have the dedication to play professionally,” she says. “At that point no other music career options were offered, at least through school.”

At the time (the mid-1980s), careers in audio weren’t something often presented to people – particularly young women – as an option; something Keyes and front of house engineer Michelle Sabolchick Pettinato have set out to change by founding Soundgirls.org. Primarily aimed at supporting women in professional audio by providing mentorships, forums, content, and development tools to members, the community welcomes men as well. In fact, Keyes estimates that men make up 35 percent of the membership. 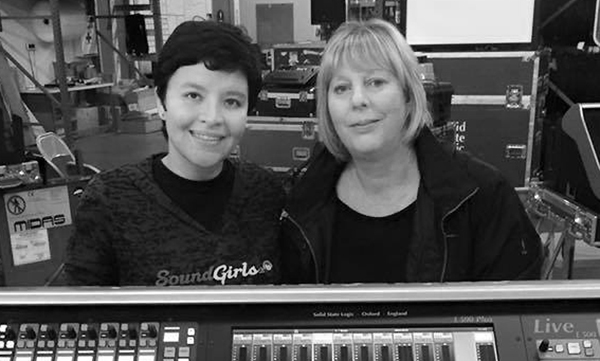 Still, she points to a lack of encouragement provided to young women interested in working in audio as the driving force for Soundgirls. Additionally, in part, the organization’s website is also meant to compensate for diminishing arts programming in public school curriculums, something that Keyes noticed when her twin girls moved from the Montessori schools they’d attended to public high school.

“I was fairly horrified by the lack of arts funding,” she says. “When I was in school, if I didn’t have arts and English programs, I would have dropped out. That was a guiding light when we started Soundgirls.”

The intention is to provide resources for young people starting out in production, as well as for those currently working in the industry, along with a means of connecting industry veterans and emerging professionals to share advice and provide support.

Inspiring Encounter
It’s not the kind of resource Keyes had access to when she started her career in audio in 1986. And it was only by chance that she got it, making a serendipitous decision to attend a Black Flag show instead of going with friends to a concert by the band Fear that was being staged closer to home.

Attending the Black Flag gig meant public transit and potentially being stranded in LA all night, but Keyes, never one to do things the easy way, went anyway. Before the show, she made her way to the front of the audience and started talking with a young mix engineer named Dave Rat, owner of then-fledgling audio company Rat Sound, who was working the gig. It’s a meeting she credits with inspiring her to pursue a career in audio.