Symetrix launched the latest upgrade to its successful SymNet platform of network audio solutions – SymNet Designer 9.0 – which is now available for download.

The key feature of this new version is SymVue, a real-time user control panel application that displays control screens exported from SymNet Designer 9.0 functioning as a multi-user, multi-point control environment for SymNet systems.

SymVue runs on any Windows-compatible device, including touch screen enabled PCs and tablets, which run Vista or XP. The computer communicates directly with SymNet hardware over Ethernet, independent of SymNet Designer.

The desired user control interface is created in SymNet Designer 9.0 as a control screen, and then exported to one or many Windows devices for tailored operation of the SymNet system.

All SymVue computer(s), any Symetrix ARC wall panels, and even third-party control systems are synchronized with each other at all times.

This process of creating a graphical user interface and exporting it to off-the-shelf control hardware represents a significant savings in time and money when compared to third party control systems.

The included collection of customizable graphic objects coupled with the ability to import .JPG, .BMP, and .PNG files means user displays can be of the highest quality. 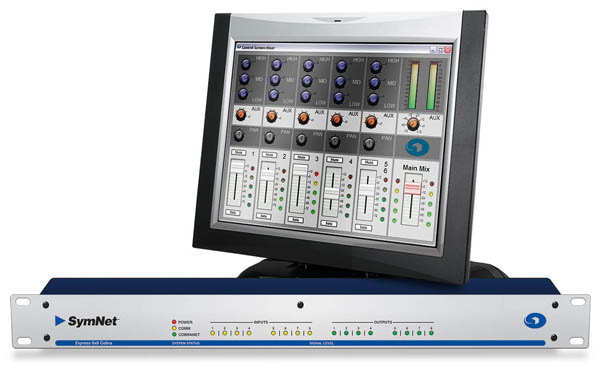 “This release takes the utility of SymNet to the next level,” stated Paul Roberts, Symetrix Director of Sales and Marketing. “SymVue technology has a very high ‘wow’ factor for integrators and system designers. Depending on the system requirements, they may not need to turn to a specialized control system, and they recognize the value in that.”

SymNet Designer 9.0 software comes with more than 500 processing objects, including a collection of logic and control functions that can accept or issue commands via external triggers and devices.

This connectivity, combined with approachable ARC wall panels and SymVue-enabled computers, gives system designers and integrators a viable alternative to traditional control systems for A/V installations up to a certain level of complexity.

SymNet Designer 9.0 can be downloaded at www.SymNetAudio.com, and it will also be on display at the upcoming 2009 InfoComm show in Orlando at the Symetrix booth, number 6633.

(Be sure to visit PSW’s 2009 InfoComm New Product Gallery.)