Sound for multiple stages and headliners from a diverse range of styles delivered to more than 100,000 in Napa Valley...

Having successfully brought its third season effort to a close, BottleRock Festival (Napa, CA) flexed its muscles and showed its mettle, shaking off financial adversity, dodging various other obstacles, and jumping through hoops to land on its feet with one of the country’s biggest Memorial Day launches of the summer festival season.

More than 100,000 served as witness to the 70-plus acts crossing its stages at the downtown Napa Valley Expo Center, including the likes of Imagine Dragons, Public Enemy, local favorite Michael Franti, Los Lobos, No Doubt, Robert Plant, Snoop Dog, and Passion Pit. Sound, lighting, and video was provided by Delicate Productions, which has served the event since its beginning.

To accommodate the sheer size of the festival, Delicate drew upon the skills of 52 techs, three runners, a project manager, individual department heads for sound, video, and lighting, and the project’s account manager, industry veteran George Edwards. 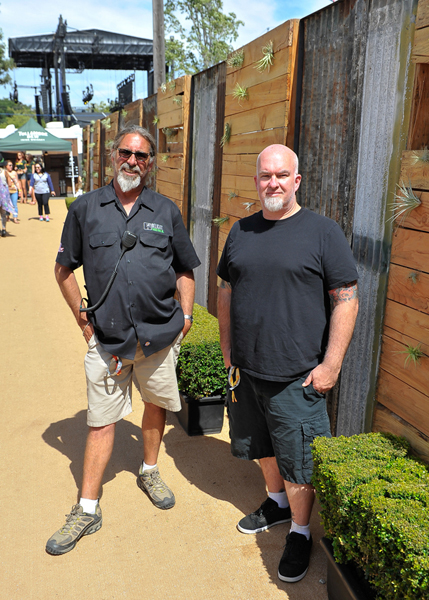 Proper Place, Right Time
“One of the biggest challenges at BottleRock was focusing the arrays,” concedes Edwards, who additionally wears the title of general manager at Delicate’s Bay Area facility in Hayward, CA. “Working with production to coordinate all of the performances was the second most difficult task. With three sizable stages and a steady stream of acts going day and night, it was a 12-month undertaking to make sure everything was in its proper place at the right time.”

In the past, BottleRock has been the target of local noise complaints. Sensitive to the issue and seeking to maintain good community relations, administrators have taken over-and-above measures to both keep sound inside the park and monitor levels. Presiding over the monitoring efforts was High-Tech Audio’s Sidney Wilson.

Using a B&K system operating over cell towers and test stations set up across the grounds and its perimeter, Wilson recorded levels, integrating Google Maps to detail temperature, humidity, barometric pressure, wind speeds and more at every test position. Data collected was stored and can be recalled to produce a forensic report designed to stand up as testimony in any court. 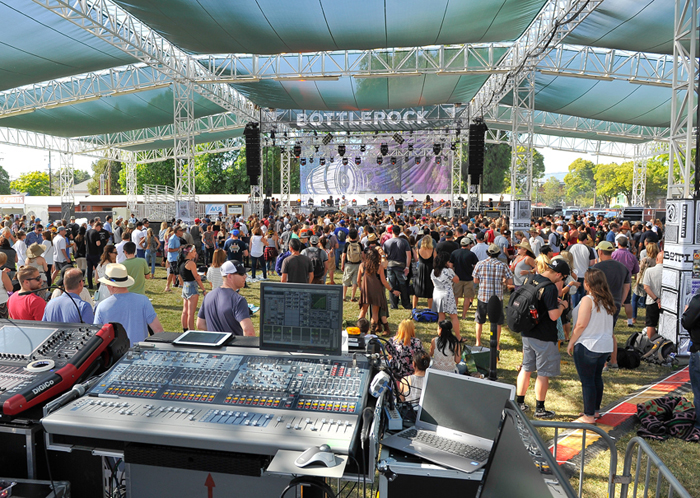 The Miner Family Winery Stage at BottleRock, with VUE Audiotechnik line arrays flanking the stage and Avid VENUE and DiGiCo SD9 consoles at front of house.

Bringing tight focus to the arrays to avoid spill into surrounding areas was a carefully calculated plan integrating the multiple line arrays present into a separate, but unified whole. If that sounds like a contradiction in terms, well it is, but Edwards is quick to explain: “Each rig had to cover its area of coverage, and contain its sound within those boundaries,” he says. “At the same time, it couldn’t be considered an island unto itself, we had to take the collective whole of all the systems into account and steer each away from interacting with any other. Achieving anything other than that results in a condition I call audio collision.”

Tried & True Plus New
Delicate has had very good results achieving goals like these in seasons past using Martin Audio’s multi-cellular MLA loudspeaker arrays, and that continued (see sidebar). This year, al-Class line arrays from VUE Audiotechnik were added to the equipment manifest as well, deployed at the Miner Family Winery Stage. “The VUE rig worked out OK,” Edwards reports. “The moment we had it trimmed, it became instant buddies with everybody else – muy simpatico.” 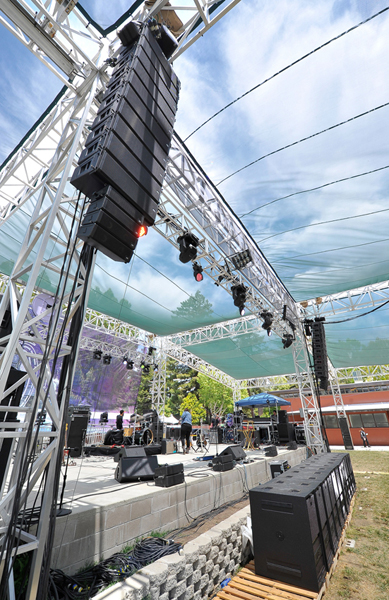 A closer look at the main system loudspeaker set, incorporating VUE arrays and subwoofers, at the Miner Family Winery Stage.

A relative newcomer on the scene, VUE technology is developed under the engineering aegis of Mike Adams, who co-founded Audio Composite Engineering (ACE) and played key roles in the creation of JBL VerTec and QSC WideLine components. Representing the company’s first real exposure on the national festival circuit, BottleRock’s Miner Family Winery Stage received an al-8 hang running 10 high over four al-4 cabinets for its mains.

“The al-8s are double-8-inch-loaded boxes, and most people are used to seeing double-12s in these kinds of applications,” notes Jeff Taylor of VUE. “We’re not saying there’s any replacement for displacement necessarily, but this system was custom-engineered to deliver the best performance in as compact of a package a possible.”

In addition, the compression drivers in these loudspeakers use proprietary beryllium diaphragms, bringing that material to professional applications. The loudspeakers are integrated with matched power and 64-bit DSP that also now offer Dante networking.