Strength In Smaller Numbers: Setting The Stage For Sara Bareilles On Tour

"We all work together - band and crew - with a level of honesty and efficiency that really adds value to our every move." -- Trey Smith, front of house engineer

As part of their efforts to keep Sara Bareilles performing at her peak on the road, Trey Smith and Kevin Twist share the responsibilities of many.

With Smith standing-in at front of house and fulfilling all the duties of tour manager too, Twist takes a place each night at the helm of monitors, in addition helping to manage myriad other production details.

Speaking from Nashville while on hiatus after wrapping up a successful touring season late last December, Smith concedes that he and Twist probably have done everything the tour has demanded at one time or another outside of selling merch out front.

“Fortunately there’s another person for that,” he notes with a laugh and subliminal sigh of relief that reveals itself between the lines. “We may be small and pulling double-duty in many areas, but we all work together – band and crew – with a level of honesty and efficiency that really adds value to our every move, and gives us a certain power that is greater than sheer numbers.  Beyond camaraderie, we’ve all been together long enough that this is really like family.”

Eclectic Collection
Since signing with Epic Records in April of 2005, Eureka, CA-born Bareilles has gone from bar and club scene graduate to mainstream success as a singer, songwriter, and pianist with a string of hits (“Love Song,” “King of Anything,” et al.) and three Grammy nominations. This past touring season found her both headlining and supporting Sugarland, the latter appearances having the unfortunate distinction of finding the artist concluding her performance on the Hoosier Lottery Grandstand stage just before its collapse at the Indiana State Fair on August 13. 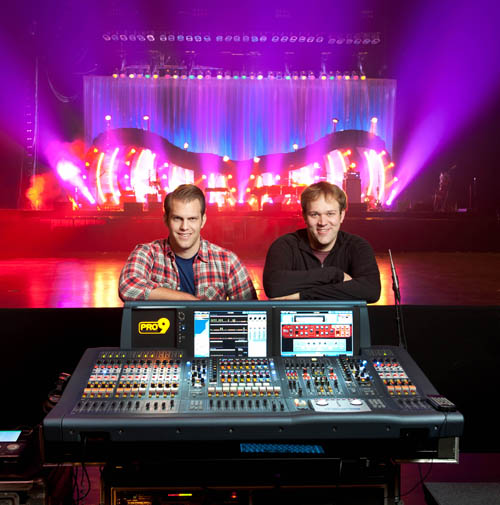 The venues Bareilles inhabits are as eclectic as the members of her audience, ranging from 1,500-seaters like the House of Blues outlets found in major markets, all the way up to rooms with a capacity for 7,000 like the Bill Graham Civic Auditorium in San Francisco, which was the site of her next-to-final performance for 2011, as well as the backdrop for the photos that accompany this article.

Most of the time Bareilles sings and plays piano onstage, but she also is seen and heard with an acoustic guitar and even a ukulele, which, Smith admits, is “a tricky instrument to do with a full band setup. We’re still trying to get it 100 percent spot-on, and are pretty close.” 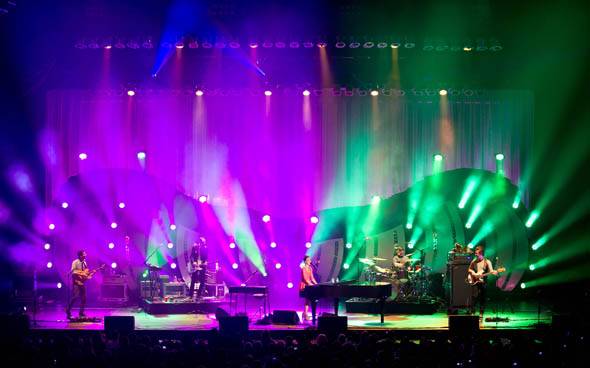 Bareilles and her band in full concert mode at the Bil Graham Civic Auditorium in San Francisco. (click to enlarge)

Bareilles’ live band features Joshua Day on drums, Daniel Rhine on electric and upright bass, Phil Krohnengold on keys and guitar, and Javier Dunn on guitar. With everyone singing backing vocals, Day is known for bringing a vast collection of percussion (shakers, tambourines, and much more) to the stage, while Krohnengold’s keys are backed by the classic sound of a Leslie speaker.

“We have stage volume,” monitor engineer Twist says, “but this isn’t a heavy rock ‘n’ roll stage where there are towering sidefills or anything. There’s a fair amount of bleed, but we do our best to isolate the various elements by carefully positioning cabinets onstage and adjusting our volumes based upon the venue. Overall we keep things very natural. We don’t want to put cabs in iso-boxes offstage. That look isn’t consistent with who we are, and it can sometimes be disturbing for musicians sonically, or even psychologically if they’re not used to performing without an amplifier behind them.”

Read More
Musicians Are From Jupiter, Engineers Are From Saturn
Pages: Page 1, Page 2, Page 3
1 23Next »