An industry veteran discusses his rise to professional touring engineer and lessons learned along the way.

Erik “E-Rock” Rogers’ story may seem familiar to many of you: 50 dollars a show and all of the beer he could drink for loading gear and pushing buttons that made the lights flash in time with the kick drum.

At the time, the 19-year-old fledgling production professional was introduced to the friend of his then-girlfriend, who happened to be the drummer of a club band in Dayton, OH. The band needed some labor and lights, so they put Rogers in a corner of the stage with a lighting desk.

Eventually, he found his way to a Mackie 1604VLZ mixer and front of house; fast-forward a couple of decades and he’s now mixing FOH as well as serving as production manager for the ongoing U.S. tour by country superstar Dustin Lynch in support of headliner Brad Paisley. I caught up with “Mr. Rogers” at a recent tour stop in Ridgefield, WA, where he spent some time telling me about his neighborhood.

When he first began working in production, Rogers begins, he had no idea what he was doing and added that while most of the other local sound people gave him no insight, a few took him aside and offered some mentoring. From there it was study time as he consumed books on acoustics, physics, music theory and more.

“The more I learned, the more obsessed I became,” he says. “Eventually, at 21, I quit my full-time job and went to work with Paul McDermott’s regional company, M.S. Entertainment (in Dayton). Paul was my first real teacher and on days where we had no gigs and there was nothing to fix, he just let me experiment. I was an audio mad scientist!” 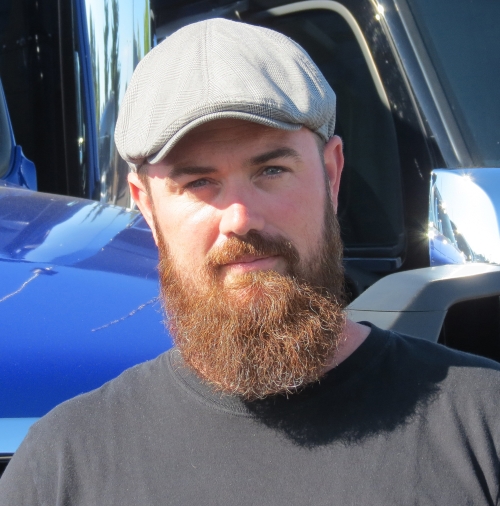 Rogers’ first professional gig was a gospel show. He’d never seen split consoles or 40 channels of inputs, much less 12 wedge (monitor) mixes. There was a choir on stage, plus a band, and plenty of RF issues to go around. He ran back and forth between consoles, convinced he’d blown the show.

However, his boss, seeing how panicked he was, took him aside and told him to shrug it off. They loaded out and the next day his real audio education began.

After a few years, having been bitten by the “audio bug,” he sent his resume to every touring sound company in the U.S. and received a call back from Paul Owen of Detroit-based (Livonia, MI) Thunder Audio. One 4-hour drive and one 5-minute interview later, he was off to the Bonnaroo festival to serve as the FOH tech at one of the main stages. It was a “sink or swim” situation, and after successfully swimming through the mud at Bonnaroo, he was dispatched to work a series of summer festivals.

In between the festival gigs, Rogers also worked as a freelance mix engineer. He eventually caught the ear of veteran audio pro and mix engineer Jim Jorgensen (now with Martin Audio) and was invited to join his first national tour with Stevie Wonder as A2, monitor tech, and patch person. And his career snowballed from there.

From there he want on to work as a system tech for Avenged Sevenfold, Buckcherry, Deep Purple, and Taylor Swift, and also mixed FOH for a range of acts, including Death Angel, Testament, Apocalyptica, Najee, Scott Stapp, Scar the Martyr, and more. Rogers has also spent time at the monitor position for Ed Kowalczyk and Gavin DeGraw.

I asked him about the perception of going from mixing “big rock” hard rock/metal artists to modern country music. “People tend to think that genre matters. It really doesn’t,” he replied. “Music is music and the laws of physics don’t change because my artist has a cowboy hat on.

“The biggest difference, really, is volume. I was hired for my current gig because the artist wanted a “rock ‘n’ roll vibe” to his show. The first gig with Dustin came out of the chute at 109 dB, which might have been a bit much for a country crowd. But they still got up and danced.”

The fact that Lynch seeks that vibe spurred my next question: The artist doesn’t get to experience the mix in real time, so how do the two of you communicate about the approaches to the show and mix?

“For starters, I record every show on multi-track. I do this for a two reasons. One, I do a virtual sound check daily. As a direct support act we often only get a line check (on a good day),” he answered.

“Secondly, often when I’m playing back the previous night, the band will come out and give a listen [and give me feedback]. When a new song is coming into the set, I usually get an advance copy so I can get to know the feel and direction. And when they’re rehearsing, Dustin will often come out and listen to playback. The more you work with an artist, the more they trust you.”

As the tour’s production manager, Rogers also has total control of his FOH equipment. Upon landing the gig in the midst of the previous tour two years ago, he wasn’t happy with the gear situation.

“Three shows in, management asked me if there was anything I needed/wanted; I gave them a list. A few months later I was unpacking a brand new console,” he said. “Every now and again, I’ll hear about something I want to try out, and our vendor, Special Event Services [Winston-Salem, NC) is really good about satisfying my audio curiosities and shipping gear to me.

“But there isn’t a piece of gear I can’t ‘live’ without,” he added. “Sure, I’d love to always have my Smaart rig and my preferred mic/RF package. But fly dates exist. Things break. Sometimes I forget my iLock. Sometimes the airline loses luggage. It’s my job to rise above that kind of situation and deliver. The only things I really need on the road are the incense my fiancée buys me and the little plastic turtle my daughter gave me a few years back.”

His music theory background plays into his approach to the live mix: “Music theory is to music what the laws of physics are to audio, and in a concert environment you really can’t have one without the other. During the day, when the house lights are on and the measurement mics are all over the place, my job is scientific. There’s a mathematical or mechanical solution to most problems.

“When the house lights turn off and the show starts, there’s a completely different energy in the room. My job becomes musical. I’ve been reading about psychoacoustics lately and there’s a fantastic truth involved: ‘One hears what one wants (or expects) to hear.’ As much as it’s my job to get all nerdy with loudspeakers, it’s equally my job to act as a tour guide on the audience’s musical experience. I listen to what the band is doing and I make sure that the loudspeakers are re-creating that as transparently as possible.

“I also find that across my 72 channels of inputs I can occasionally get caught up focusing on minutiae ending up annoyed and/or initially disappointed. Later on I come across a fan video online and hear everything exactly the way it’s supposed to sound. Perception is everything.”

As we talked, Rogers expressed the hope that some clever entrepreneur will read this interview and develop a rack mountable air conditioner – his Waves servers and DiGiCo SD10 console don’t like the mid-summer outdoor gigs that get over 100 degrees in the shade. Aside from that, he doesn’t have an “ideal rig,” per se.

“Every manufacturer has their edge and take on how to approach sound reinforcement but the simple truth is a good engineer can do the best things with the worst boxes. The opposite is also true,” he observed. “Having said that, my ideal system would have enough firepower to shake the last seat in the back row without having a negative effect on the show. I like to keep things at 96 kHz and look forward to advances in technology and headroom; my primary concern is keeping my main vocal in front of the mix the entire show. Oh, yeah, make it lightweight and compact; truck space is a premium…”

As we wrapped up our discussion, I asked Erik what advice he would give to his 19-year-old self. “When I was starting out I was just a smart kid with a big mouth and no filter. I was my own biggest obstacle. Every now and then I run into some young kid and I ask myself, ‘Was I this much of a jackass?’ The answer is always yes, so if I could pass anything along I would remind folks that we make our living with our ears, not our mouths.

“I’m 40 years old now; I have different priorities. I have a 9-year-old daughter and my fiancée has two kids. My daughter is used to me being gone; I’ve been touring since before she was born, but, as she gets older, she wants me around more. So finding that balance is important.

“Lastly, here’s a word about staying healthy on the road. I haven’t been healthy for most of my career; after-show food and free booze put some pounds on me. In the last year or so, I cut way back on the drinking and started exercising. It’s hard to ignore the after-show food sometimes but it’s really better for me to do so. I don’t need to eat after midnight; I’ll make it to the morning.”