“Our Nexus router resides in two TV studios,” explains Keith Conrad, director of marketing/controller for the company. “We have one in the U.S. and the other in Europe. The Nexus system also travels around the world for shows done in all types of remote locations, such as stadiums or trade shows. The router that we’re using for our live show applications has a Nexus Star at the center of the system, which includes a dual matrix for routing inputs to outputs.

“Our system is equipped with three of Stage Tec’s RFOC optical interface cards,” he continues. “These connect to multiple base devices that are located at front of house, stage, and remote areas where the talent is located. We use all types of audio transport to get signals in and out of the Nexus. These include analog, AES digital, Dante, and MADI.

The router is currently being used primarily as the front end for broadcast events, used to collect all of the analog and digital inputs from all over the broadcast and to be able to route those signals quickly and efficiently to all of the various locations of the production—from the ACR (Audio Control Room) to front of house and monitors.

“We’re also tying the router into our communications systems to seamlessly route communications to different areas of the production,” Conrad adds. “By taking this approach, we don’t have to run separate cables and make hard patches.”

He notes that the most appealing aspect of the Nexus router is the ability to keep the same front end—analog and digital I/O—and easily switch out the consoles that are being used for any given project. For example, sometimes a Yamaha CL1 or CL5 digital console is the best option, based on the nature of the application and the real estate available. With the use of the Dante card, 3G can easily change out the console and keep all of the routing in place for both inputs and outputs to the drive rack and amplifiers.

“Equally important,” Conrad notes, “with the MADI cards, swapping out large frame digital consoles such as those from Soundcraft, Studer, and Midas is a piece of cake.”

In addition to its signal management flexibility, he’s also enthusiastic about the Nexus router’s audio performance: “One of my favorite parts of the Stage Tec Nexus router is its mic preamps. Sonically, these mic pres blow away the stage boxes offered by live sound consoles.

“By interfacing our equipment via Dante or MADI cards, we end up having the best sounding sound reinforcement consoles you will ever hear. The next best part of the Nexus router’s mic pres are the splits. Being able to have four discrete head amps for each mic input alleviates the need for a copper splitter, which saves us time and space on productions.” 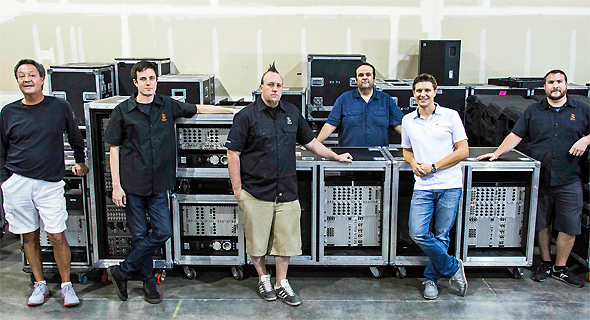