St. John Lutheran Church began in 1877, just ten years after Nebraska was admitted to the union, but its current building opened in 1968. A sound system was installed in 2000, which was based on point-source speakers suspended way in near the top of the sanctuary’s wooden, peaked ceiling, as was common in churches of the time. It proved less than an ideal solution, though.

“They never liked how the old system sounded because the person’s voice was coming from way up in the ceiling, so you’d hear the direct acoustic sound of the pastor’s voice, and then the delayed sound of the speakers,” recalls Phil Grimpo, executive director of multimedia production and AV systems integration firm Inspirmedia Productions. “Intelligibility was poor, there was too much reverb, and it was disorienting. The room is tall and quite live, with brick walls and stained glass. It’s one of those situations where we love the reverb when the choir is singing and we hate the reverb when it’s spoken voice. They were doing a big remodel, and they wanted a new sound system, so we installed a pair of Renkus-Heinz Iconyx IC16-R-II digitally steerable line arrays.”

The IC16-R-II is a powered system with 16 4-inch coaxial transducers, each with three high-frequency tweeters, and 16 amplifier and DSP channels. It offers up to eight steerable beams, with multiple beams and acoustic beam centers and beam control effective down to 400 Hz. That enabled the Inspirmedia team to mount a pair of arrays to the brick wall, one on each side of the altar area, eliminating the problem of delayed sound from the ceiling, while steering the sound everywhere it needed to go and minimizing reflections off of the sanctuary’s many hard surfaces.

“Services are mostly spoken word with choir and organ,” Grimpo notes. “It’s across the street from Concordia University, which, like St. John, is part of the Lutheran Church-Missouri Synod. The university and St. John have an excellent relationship, and St. John is the main church that students attend on Sunday. Sometimes the university hosts a big concert at the church, with a symphonic group in the balcony and a choir In the chancel. With Renkus-Heinz’s digital beam steering, two IC16-R-IIs can reach all of the spaces where they want sound, without reflections bouncing off the walls and up in the ceiling. We didn’t need to use fills, and we didn’t need acoustic treatment; the room is live, the way they want it.” 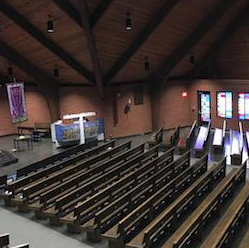 As with most houses of worship, aesthetics are important at St. John Lutheran Church, which is another reason Grimpo chose Iconyx arrays. “We need speakers that were low profile and that we could mount to the wall,” he states. “The IC16-R-II columns are slim and low profile, and Renkus-Heinz custom-painted them to match the red brick wall, so you don’t notice them.”

Although the church does not have rock-type bands-a pipe organ; a 45-voice, adult mixed choir; acoustic instruments; and small vocal ensembles provide the music-sometimes videos are shown there. To provide a little extra low-end “oomph” when needed, such as for the videos, Grimpo’s team installed one Renkus-Heinz PN112-SUB subwoofer.

“The subwoofer fit perfectly behind the baptistry, out of the way” he observes. “It’s the perfect size, and the PN112-SUB’s single 12-inch speaker gives us enough low end without overwhelming the space. The subs are well aligned with the arrays so we didn’t even have to time-align them.”

The system is controlled directly from a Roland M-200i console. All speaker management is done onboard the arrays, using Renkus-Heinz’ RHAON software, so no external DSP unit is needed. The console also sends a feed to older, preexisting ceiling speakers in the cry room.

“The Renkus-Heinz Iconyx system at St. John Lutheran Church sounds really good; the sound is clear and intelligible,” reports Grimpo. “In fact, when Concordia University was considering a new sound system for their chapel at Weller Hall, they were able to hear the system at St. John, and we ended up installing Iconyx loudspeakers at their chapel, too.”