Spotlight: An Eye On DI

Principles and the latest capabilities of direct boxes.

In its most basic form, a DI – also known as a direct box and short for “direct injection” and/or “direct insert” – takes an unbalanced high-impedance signal (i.e., from an electric guitar or keyboard) and converts it to a balanced low-impedance signal.

While there are many basic DI models on the market, there are also several feature-laden versions that do quite a bit more.

Increasing Range
DIs come in two basic varieties: passive and active. Passive designs use a transformer that performs impedance matching and balancing, essentially creating a “magnetic bridge” for audio to pass. They don’t require a battery or phantom power. Sound quality basically depends on the quality of the transformer – good ones sound far better than cheap ones. When faced with a hot input signal, passive designs saturate instead of clipping like their active counterparts, resulting in a warmer sound.

In addition, higher-end passive units may use a shielded transformer to help reject any interference from entering the unit. Speaking of interference, a passive DI really shouldn’t be placed atop an instrument amplifier because the amp transformer’s magnetic field can interfere with the magnetic field of the DI’s transformer. Numerous DI models have a ground switch and an output or loop-thru that facilitates connection of the instrument to the stage amplifier.

Active DIs, on the other hand, utilize electronic circuitry that requires power, provided via a battery or more commonly via phantom power from a mixing console. Some studio-type units may require AC power (usually via a “wall-wart”). Active DIs are much like preamplifiers and can also offer features like ground-lift switches, high-pass filters, mono summing, polarity switches, and equalization circuits. Solid-state electronic designs are common in live audio production, but there are some tube DI models that are popular, particularly in studio applications.

When I was a young soundman, I learned “The Rule” with DIs: Use a passive unit for high-output instruments like electronic keyboards or guitars with powered pickups, and use an active unit for low-output instruments. It’s still a pretty good rule of thumb but is not absolute, as many active models now have input pads to reduce hot signals while many modern passive models work quite well with low-power signals.

Most DIs convert an instrument signal to a balanced mic output, but there are passive and active models that can also convert a loudspeaker output to a low-impedance balanced microphone signal. Some also include things like cabinet modeling and EQ. Newer on the scene are “media-type” DIs designed specifically for use with playback devices like PCs, phones, tablets, and CD players, converting a headphone speaker output or line output with RCA jacks into a balanced mic signal. Some can take a stereo input and sum it to mono, while others forgo the wires altogether and connect via Bluetooth.

DIs also come in many form factors. Single-channel versions are the most popular, but stereo models and even multi-channel rack-mount units are great when dealing with multiple inputs onstage. 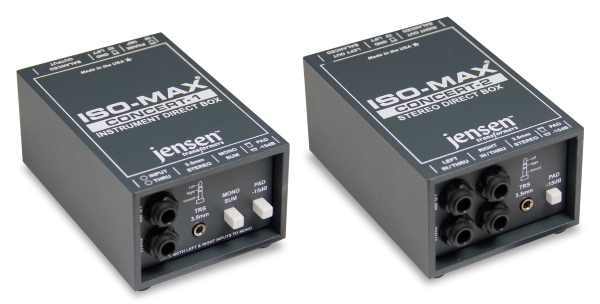 Concert-1 and Concert-2 DIs from Jensen. (Want to bet on what type of transformers they use?)

Classics & Innovations
When I first started working in pro audio more than 30 years ago, sound companies had to build their own DIs because there weren’t many commercially available units. But then as now, Jensen transformers were highly coveted in this application due to a number of factors, chiefly that they sound great.

Today, Jensen – acquired by Peter Janis and the gang at Radial Engineering a couple of years ago – offers DI boxes built around it’s own transformer technology. These transformers are also at the heart of Radial DI boxes and a host of others. The Jensen Iso-Max line includes the single-channel Concert-1 and the stereo Concert-2 that are passive models using internal shielding to help protect against interference from RF. Both have a rugged extruded aluminum enclosure and steel slide-in inner tray with recessed zones at each end to protect the switches and connectors. Jensen also offers a selection of media-type DI boxes. 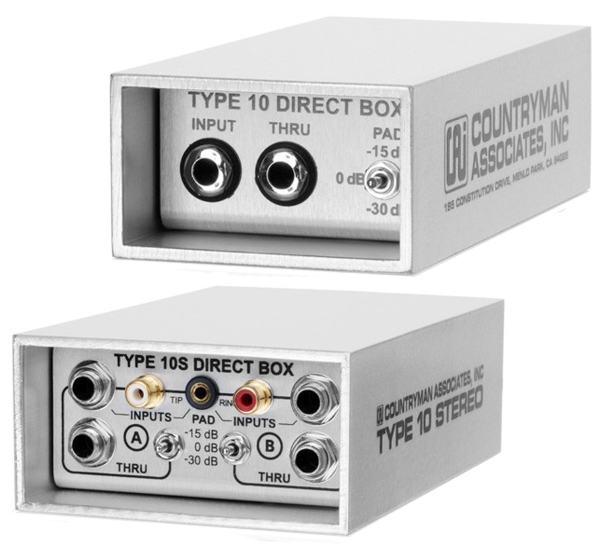 The Countryman Type 85 was (and still is) so common in production circles that many performance riders simply say “Countryman” instead of DI on the input list. The Type 85 set a standard for rugged construction, often featured in ads that showed trucks driving over the unit with no damage. It has a single-piece extruded case with thick walls and recessed connectors and switches.

The Type 10, which joined the lineup more recently, delivers increased performance with the same rugged construction, with the company stating that it offers the lowest distortion and noise floor of any commercially available DI. Dual-channel versions of both Countryman units are available, each outfitted with a stereo 1/8-inch TRS jack and a pair of RCA inputs in addition to 1/4-inch inputs and thru jacks. They operate from phantom power or a 9-volt battery. While the lineup is limited, the performance is not, with all units designed to work with any input, including loudspeaker level, while the stereo units can perform double duty as media-type DI boxes.

With tube models, rack-mount units, Dante and Bluetooth versions, to say that Radial has a DI for any application is not hyperbole, but given the company’s track record, they’ll probably continue to turn out innovative designs for an increasing array of uses.

Classic models like the passive JDI and active J48 are ubiquitous on live stages. One unit (of many) that’s more specialized is the active PZ-DI that’s specifically designed for acoustic and orchestral instruments. It allows users to properly match the input impedance to the source to optimize frequency response, dynamics and “feel.”

Craig has worked in a wide range of roles in professional audio for more than 30 years in a dynamic career that encompasses touring, theater, live televised broadcast events and even concerts at the White House. Currently he owns and operates Tech Works, a regional production company that focuses on corporate events based in Reno.
All Posts
PrevPreviousRCF Supports G20 Summit In China
NextChurch Sound: Defining Auxes, Groups, VCAs & MatrixesNext
Top Stories
Explore All Study Hall