The 17-day fair draws more than 1.0 million people that take advantage of three stages of entertainment, agriculture shows and competitions, crafts, food, shopping and dining. For the 11th year, SPL Systems has taken care of the fair entertainment needs with live sound equipment and services.

“We have brought EAW systems to the fair since day one,” notes Bill Forbes, SPL Systems owner. “the KF line array is probably one of the nicest loudspeaker systems I have worked on. They are extremely scalable – we use it all summer long. For the Big E we use KF for both the main Xfinity Arena stage and the Court of Honor stage and everyone is always pleased with the result.” 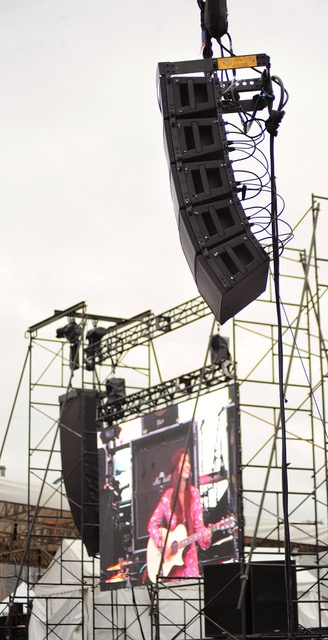 The Xfinity Arena stage fires up on weekends evenings to accommodate up to 7,000 fans. Ground and grandstand seating is placed in a horseshoe around the open stage. Forbes flies left-right arrays made up of 10 KF740 per side. Sixteen ground stacked SB1000Z subwoofers spread low frequency throughout the area. Front fill is covered by four KF730 along the lip of the stage while out fill/wing fill is taken care of by a total of four KF850Z – two on each scaffold tower. Forbes provides a dozen MicroWedge MW12 stage monitors for use as needed.

“Because the stage is open, we use waterproof, acoustically transparent, covers that fit over the arrays if it rains,” adds Forbes. “I’m pleased to say that we’ve never lost a driver to weather or anything else, for that matter.”

The Court Of Honor stage runs all 17 days of the Fair. Located under a 60 x 150-foot tent, the space features a stage and bench seating for 2,000. Forbes specified left-right arrays consisting of six KF730 per side. Six SB1000Z subwoofers are clustered on the ground for additional low end. Four MicroWedges are utilized for stage monitoring while Redline RL12 loudspeakers are positioned on the lip of the stage for front fill.

Forbes equips a much smaller third stage with a pair of JFL213 loudspeaker and JFL118 subwoofers.
The last day of the fair there was a country music festival on the Xfinity stage that required an additional stage and sound reinforcement system.

SPL Systems teamed up with nearby Zasco productions to bring in the new Radius loudspeakers for the second stage. Two arrays, each made up of four RSX208L, were hung to the left and right of the stage. Low end was reinforced by two RSX218 ground stacked below the arrays.

The two-stage arrangement allowed Forbes and his team to setup for a band on one stage while the other was in use. A total of eight acts performing all day providing a constant flow of musical entertainment for fair guests.

“I have used the Radius system before with our friends at Zasco,” Forbes concludes. “It is easy to set-up and use, sounds great and the software is spot on. Everyone who has used it has nothing but good things to say and are very happy with the results. West Springfield-based SCL Sound also helped by supplementing my KF inventory for the event. It was a tremendous success and much of that is due to the excellence of the EAW systems we provide.”