The good and the bad as the spectrum auction process winds down.

We’re finally seeing the “light at the end of the tunnel” with respect to the long-running auction process of the radio frequency (RF) spectrum by the Federal Communications Commission (FCC), and most importantly for our purposes, how it will impact wireless system users in the professional audio market.

While it’s perhaps not the freight train wreck many had initially feared, there is at least some degree of bad news – thankfully tempered with some good news as well.

The 600 MHz band auction, which began in the spring of 2016, is finally coming to a conclusion. After three failed rounds, where the reserve prices and offers were nowhere near each other, round four has met the required conditions for success (if you can call it that).

The final round offered 84 MHz of spectrum to the major wireless carriers and other interested parties, and it will result in the loss of 614 to 698 MHz (TV channels 38-51).

Remember that channel 37 (608 to 614 MHz) has been – and remains – off limits for pro audio wireless systems due to radio astronomy and other specialized uses.

So the remaining usable bands will be from 470 to 608 MHz (UHF channels 14-36), joined by 174 to 216 MHz (VHF channels 7-13). There will be some slices of spectrum in the guard bands and mid-band gap within the 600 MHz band (see Figure 1) offering limited access, but only under specific restrictions. 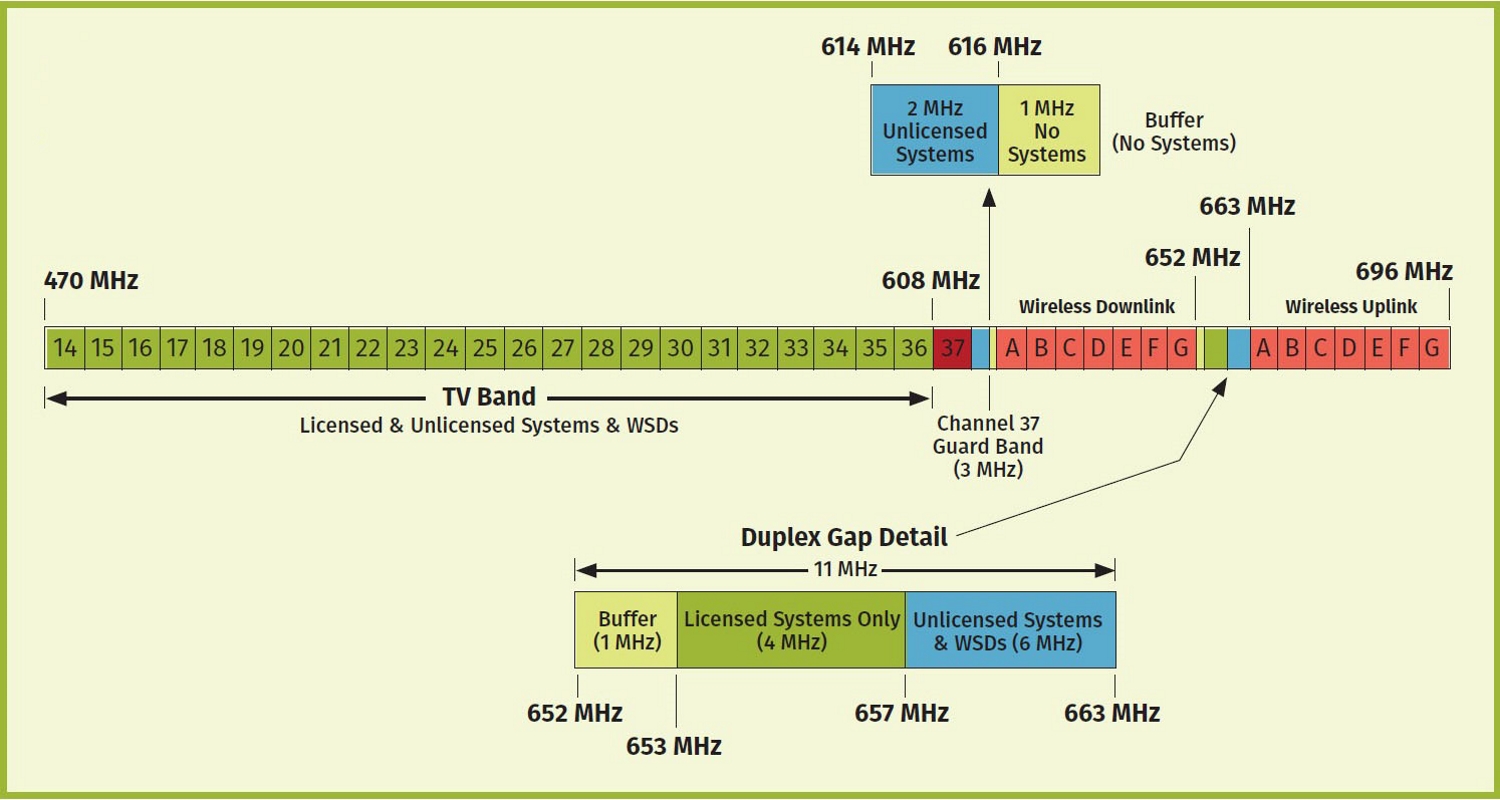 Now that the bidding has concluded, the FCC will take on the task of reassigning the existing TV stations now in the upper 600 MHz spectrum by moving them to new channels below 608 MHz in a process called “repacking.”

For the time being, we know how much overall spectrum is to remain but we can’t predict what the exact post-repack channel lineup in every city and town will look like. This will depend on how many stations are already operating below TV 37 and how many channels need to move in.

There’s also the factor that many stations may “co-locate” their channels with other broadcasters into a single transmission. Don’t forget that today’s ATSC (DTV) broadcast signal can host a couple of HD channels and multiple SD channels simultaneously.

The final Channel Reassignment Public Notice (CRPN) that the FCC will publish at the end of March will trigger a 39-month countdown, after which time all wireless system operation above 614 MHz must cease with the exception of those systems compliant with the new rules for operation in the guard bands and mid-band gap.

The good news is that users will still have up to three years to continue using existing gear in the affected blocks and bands, depending on when the new services start up in each market.

This is heartening, with far less spectrum being lost than originally feared.

Back in March 2016, the FCC had announced a “clearing target” of 126 MHz, which would have reached down to TV 30 (566 MHz). The final loss of only 84 MHz, while not anyone’s idea of a good time, will be much less harmful to the operation of wireless microphone, in-ear monitoring, and communication systems.