Another key aspect of the Yuming shows is a return to the world of the rock concert. Multiple mics in place showed how different the sound was from front to back and front to side. The engineers at Soundcraft were ready to apply the principals of subdivision that we’d learned during SIM’s experimental phase.

The upper systems, lower systems, side fills and more were all analyzed separately with local mics and equalized. Then we made level and delay adjustments that combined them together and finished the process with combined equalization.

It was 1987 and the modern process was beginning to take shape. It took a lot more time and expertise back then since each frequency response was seven segments, the delay had to be decoded from phase and we still had only a very limited amount of memory.

Even so, I look back at this as one of the most critical learning periods for system optimization. Once you’ve seen a system in a room through multiple mics there’s no going back.

The modern era begins in 1991 with the introduction of SIM II. The 21 operations (and four minutes) required to get a full frequency response now took just 13 seconds.

Delay setting no longer required a phase decryption key; we could just read time directly in the impulse response. With the original SIM 1 there were multiple mics, but it was still a time consuming ordeal to move them and get a new response.

Now we could take full advantage of the speed and ease of operation and put multiple mics in motion. This is the point when mic placement strategies began their evolution into categories.

There are many ways to solve the challenges faced in optimization, but there must be a methodology. Here’s an example of strategic mic placement and the expected traces needed to find the optimal splay between two array elements.

Procedures were developed that used the multiple mics in standard ways. Roger Gans pioneered the “star technique,” which moved the on-axis mic up, down and to the side far enough to see differences in data and enact a spatially averaged EQ. The acquisition of these four positions was faster than a single response in SIM 1 and we could view all four traces at once in color!

Another key movement forward was in the combination techniques for systems such as a main and down fill, side fill, front fill, etc. SIM II allowed us to place mics at all three critical locations: on-axis to the main, on-axis to the fill, and at the crossover point between. We learned how to get the optimal splay angle, relative level and delay to provide a seamless transition between these three locations.

During the four-year lifespan of SIM 1, only a single training course was offered, but things were about to change. 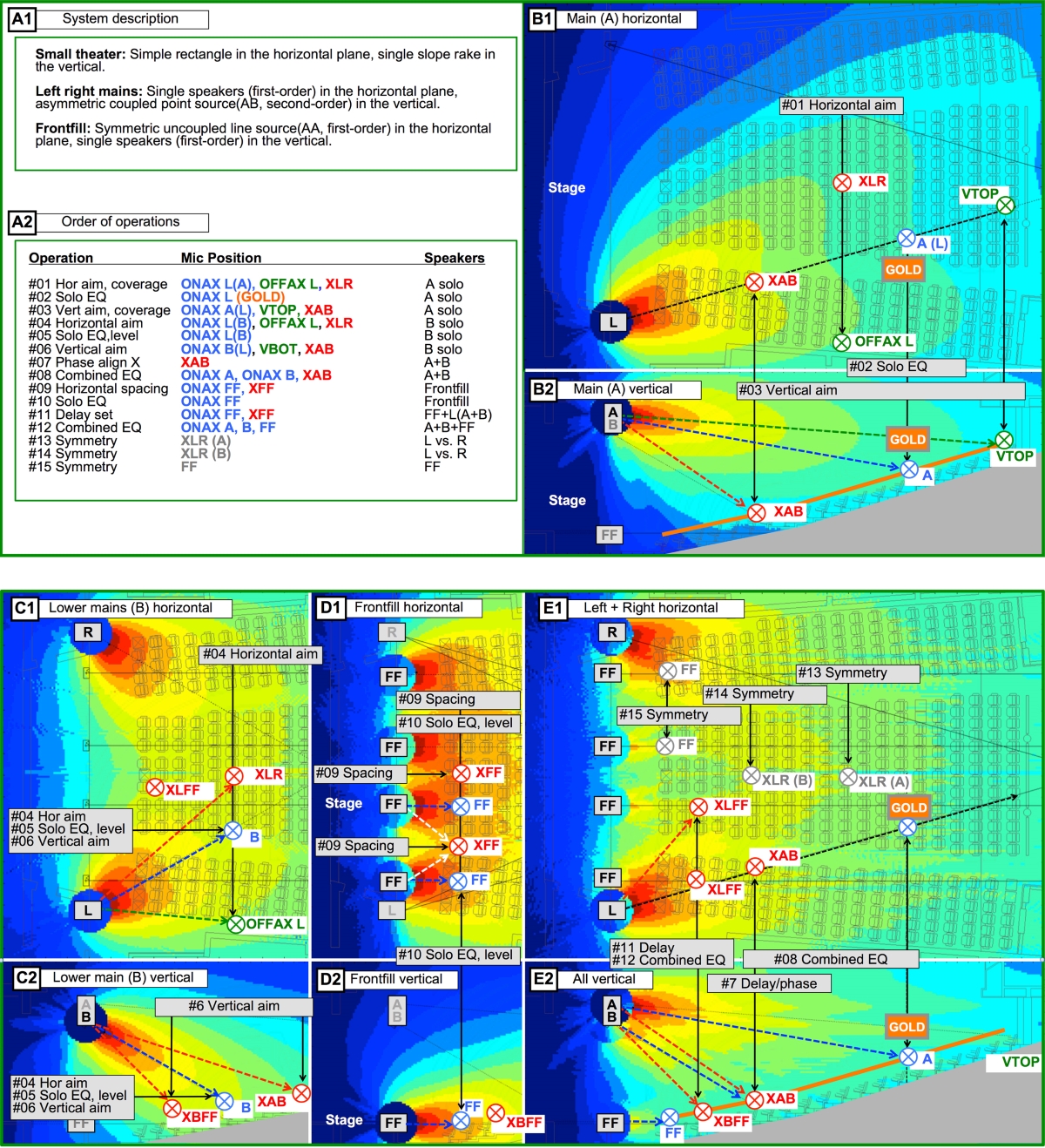 System optimization is a series of steps such as aim, splay, space, level, EQ and delay. Each loudspeaker requires individual attention, settings related to its subgroup and finally setting that optimizes its combination with the others. The methodology includes a planned order of operations, an example of which is shown here.

Two things happened now that the traces were understandable and the system became so much quicker: 1) We learned really fast because of all the back log of things we had been wanting to see but did not have the tool; 2) We were ready to teach other people what we knew (even if we’d just learned it the week before). More than 25 years later, I’m still learning and still teaching what I just learned.

All of this had a substantial impact on sound system design. I personally learned most of what I know about system design by being able to thoroughly analyze the pros and cons of other designers as their systems were viewed under the multichannel microscope. Sound designers also became more comfortable with increasing complexity in their designs when they saw it become easier to combine the systems more effectively than before.

SIM II also had a significant impact on loudspeaker product development since the tool could be used in the research lab and production line as well as in the field (a reversal of the old Hewlett Packard paradigm).

As our tuning techniques advanced, engineers were also able to provide feedback on findings in the field, which could be observed on the common platform in the lab.

They could also provide valuable input on the loudspeaker system qualities that provided the best optimization result. And likewise as loudspeakers improved, so did our techniques.

Editor’s note: Click here to read the other articles in this five-part series.