Sound Reinforcement Amidst Climate Chaos At The 2010 Winter Olympics

This isn't your average outdoor festival-type gig - setting up a sound reinforcement system on the side of a mountain while these events are transpiring is no small feat.

Canada played host to the 2010 Winter Olympics in February, specifically Vancouver, British Columbia and its surrounding neighbor cities, albeit not without its challenges.

While the U.S. received record snowfalls, the biggest hurdle for the Vancouver Olympic Committee (VANOC) was possibly the fact that the area experienced its warmest temperatures in 114 years.

Organizers were literally moving snow over mountains to make sure skiing and snowboarding events could continue, with some understandable delay.

This isn’t your average outdoor festival-type gig – setting up a sound reinforcement system on the side of a mountain while these events are transpiring is no small feat.

Rocky Mountain Production Services, with offices in Vancouver and Whistler, BC, was tasked with providing some of the audio equipment required, but more importantly, capable audio engineers and staff to manage specific production requirements.

As to be expected with any event as large-scale as this, there were numerous sound companies involved in providing audio equipment for the Winter Olympics, but here we are focusing on sound for the snowboarding events taking place on scenic Cyprus Mountain, a short drive outside Vancouver.

With an entertainment stage situated at the base of the snowboarding half-pipe and a neighboring grandstand, the production staff faced several challenges.

“Initially, the entertainment stage was planned for a lower area, but with Mother Nature intervening, we were pushed further up the hill,” recalls Hanna Vorlicek, Production Manager for Rocky Mountain.

“We needed to build a safe structure that can handle snow, the weight of the audio rig, and mud.

As organizers were trucking and flying in snow to build the half-pipe, we assembled our equipment on pallets to be either flown, or carried by Sno-Cat, up the hill.”

She recalls how they needed to clear the area one day as “it was deemed not safe because helicopters were dropping snow.” 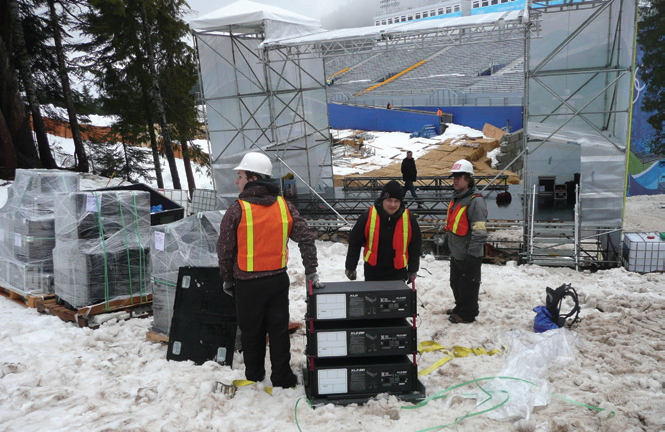 The relocation of the stage actually required digging into the hillside, and what was supposed to be a 4-foot tall stage became 16 feet tall at the front, while fitting flush to the hill at the rear, allowing staff to walk onto one of the corners of the 9-degree slope.

“I really wish the media would give kudos to the people who worked 24/7 to get these events running smoothly,” adds Vorlicek. “I’ve never seen guys work so hard, and they really need to be commended for what they did.”