The recent Outside Lands Festival in San Francisco’s Golden Gate Park spanned three days, seven stages, and 91 live acts, with Ultra Sound/Pro Media of Hercules, CA and Sound On Stage of Hayward, CA sharing the responsibilities of providing sound for the multiple stages as well as some of the other attractions of the festival.

The second in what is expected to be an annual event, Outside Lands drew about 100,000 people to a park that is more than three miles long and nine blocks wide – at 1,017 acres, it’s 20 percent larger than Central Park in New York City. Residential areas are on three sides of the Golden Gate Park, with the Pacific Ocean on the fourth side.

Sound On Stage provided sound for six different areas, including the Twin Peaks Stage, located in Speedway Meadow at the main entrance to the festival grounds, as well as the Presidio and Sutro Stages, placed at opposite ends of Lindley Meadow.

George Edwards, General Manager of Sound On Stage notes, “We had a flawless weekend.” He also praised support from manufacturers noting that representatives of L-Acoustics and Digidesign came out to help ensure everything went according to plan.

Some of the acts gracing the Sound On Stage equipped stages included, Zap Mama and Thievery Corporation, Tom Jones, The Mars Volta, and Lucinda Williams.

Sound On Stage was also involved with the first Outside Lands Festival, with the only significant changes including increasing the quantity of subwoofers per stage and going exclusively digital for FOH consoles and loudspeaker processing. 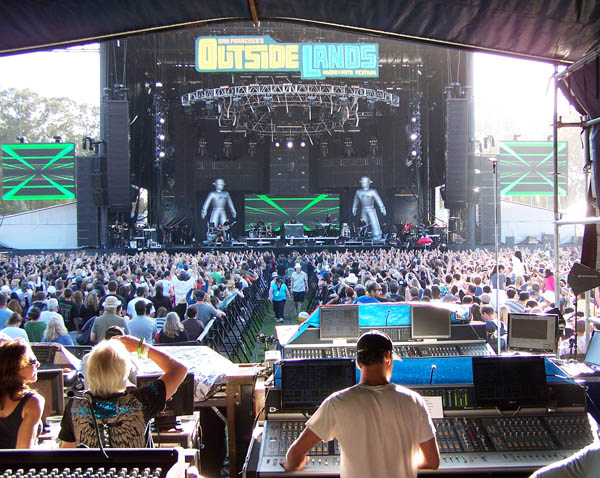 Perspective of the Outside Lands main stage that is flanked by L-Acoustics line arrays. (Click to enlarge)

One challenge, Edwards points out, was coordinating which specific console would ultimately reside at a given stage due to management and band requests.

A dozen Shure UR 1 handheld wireless microphones were deployed between the stages. Edwards reports that they coordinated with the bands and other vendors for the festival, and no frequency issues arose over the course of the festival. 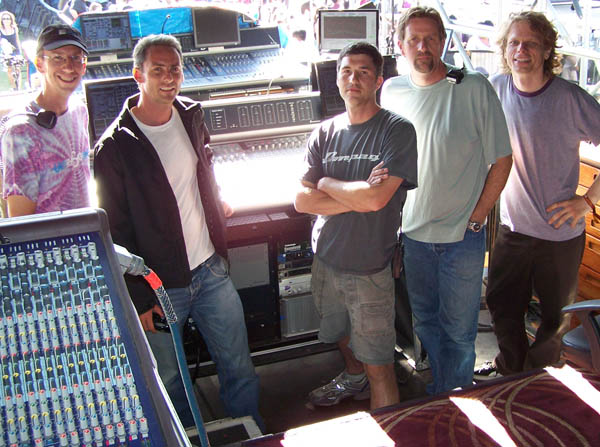 Doing multiple stages of rock ‘n’ roll in the middle of what’s basically a residential area can pose some challenges, but Edwards states, “There was not any bleed from stage to stage. The co-producers (Another Planet Entertainment and Superfly Productions) worked really well together on the design and logistics of all the stages.

“For the sake of the neighbors and the future of more events like this in the park, we kept the dB levels at around 101 “A” weighted at Front of House. We are not aware of any issues due to SPL. Overall, this was a great show to be involved with.”