The Château de Grignan has become well-known for its magical summer outdoor night festivals, attracting more than 30,000 spectators each year. This past summer, the Pietragalla-Derouault theatre company presented its unique dance and theatre adaptation of Alfred de Musset’s Lorenzaccio in the open air in front of the façade of the castle.

Sound engineer Mohn Pincemin also brought his unique approach to live sound production for the show, counting on a QSC TouchMix-30 Pro digital mixer to help him meet the challenges of the unusual production and venue.

Starting his career as a guitarist and vocalist prior to becoming an engineer has given Mohn a unique approach to live sound production for a performance; it’s an approach that considers the perspectives from both sides of the stage.

“Having been onstage so many times has allowed me to understand the value of every show lies in its emotional impact on an audience. To achieve that great impact, one must be free of being worried about the technical aspects of the show as much as possible, in order to concentrate instead on the atmosphere of the show, the human elements and the comfort of the performers onstage,” says Mohn. “As an engineer, my role is to highlight a performance, to give it character and framework and help to deliver impact on the audience. It’s important to ensure that people have not gone out to a show without good reason.”

Several months earlier, Mohn had a demonstration of the TouchMix-30 Pro and knew immediately that it was a fit for the complex outdoor production of Lorenzaccio. “The TouchMix-30 Pro interested me immediately, as it is a product that has succeeded in bringing together so many possibilities in sound mixing in such a compact form. It is truly portable, very robust, the ergonomics are very relevant and it sounds great,” says Mohn. “I knew that TouchMix-30 Pro had all the options an engineer could dream of to face complex situations.” 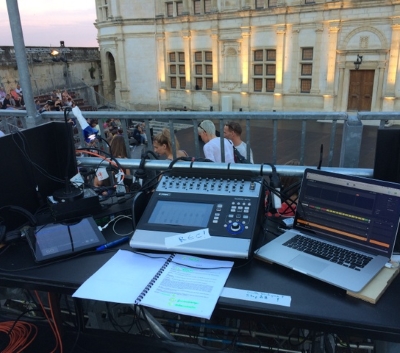 There were a variety of challenges and constraints for this production of Lorenzaccio. As the three-month production took place outdoors in front of the castle, the front of house equipment had to be assembled every day and dismantled every single night.

And as the Proscenium stage featured the audience surrounding it on three sides, it was complicated to adjust the delays between the four fixed stage microphones and the loudspeakers in order to achieve a sound reproduction as natural and discreet as possible.

With its large size and complicated access around the venue, Mohn knew that it was essential to be able to use a Wi-Fi tablet for portable control.

“Having the TouchMix-30 Pro really allowed me to have all the tools I needed to meet the challenges of the production. To manage the coverage of multiple loudspeakers, I used twelve outputs as well as two additional inputs for video recordings. Thanks to the TouchMix-30 Pro, I also had graphic EQ, delay and dynamics also available on each output,” says Mohn. “As the show was also filmed frequently, I was able to use TouchMix to record it in multitrack very easily with an external hard drive. Being able to use my iPad to adjust delays and be able to move freely throughout the site was a big help. Most of all, the sound quality of the TouchMix was really natural and rich-sounding, which is not always the case with a digital console.”

In the coming weeks, Mohn will be working on adapting the Lorenzaccio show for the stage at the Alfortville Theatre. Afterwards, he will become a performing artist again, working as a comedian and musician with actress Mathilde Dromard on a production in Avignon at the Carmes Theatre. And after that, Mohn will be engineering a very large concert at the Avignon Opera House featuring a choir of 350 singers accompanied by eleven musicians – all mixed on the TouchMix.

“The TouchMix-30 Pro is unbeatable in its design and ergonomics, and the way it sounds – which is marvelous,” adds Mohn. “It is an amazing, portable tool that allows you to handle the challenges of all kinds of sound engineering situations. Add to all that its reasonable price – it’s indispensable.”