Solving A Conundrum: Deployment Of A New Subwoofer Configuration

Any reservations were quickly forgotten once we heard the rig...

I’ve spent the past several years experimenting with various types of subwoofer arrays and have arrived at the same conclusion each time: with each method, something is gained while something else is lost.

Left-right placement enhances coverage on the sides at the expense of drastic power alleys and cancellation zones.

Horizontal arrays produce even coverage in front of the array at the expense of a major drop-off on the sides.

With delayed arcing, side coverage is improved, at the expense of tightness.

With cardioid “front-back-front” setups, tightness is enhance at the expense of output SPL.

I could go on, but you get the idea.

Sub deployment is especially tricky in arenas, where the large open area and hard (usually concrete) surfaces makes for the addition of low-end “mud” in the diffused field, along with the need to cover a wide area in the horizontal plain – usually 180 degrees or more.

One of the more common practices I see in the field is flown left-right sub arrays, where hangs of usually eight or more boxes are flown either just outside of or behind the main PA hangs. While the throw is fantastic, comb filtering from left to right is a mathematical certainty.

My choice has been a horizontal array, where boxes are placed along the front of the deck and spaced evenly at a quarter-wavelength of the target frequency. The coverage on the floor is extremely solid and even, but it’s virtually non-existent elsewhere.

I wrestled with this problem last year with a system provided for an Easter Sunday worship service presented by Austin Stone Community Church at the Frank Erwin Center on the campus of the University of Texas in Austin.

While the primary function of the Erwin Center is hosting college basketball games, it’s also booked solid most of the year with A-list tours that draw 15,000-17,000 in attendance. The floor is elongated, stretching 110 feet from the deck to front of house, while the upper levels begin to widen, until the arena becomes almost perfectly round at the top of the mezzanine. 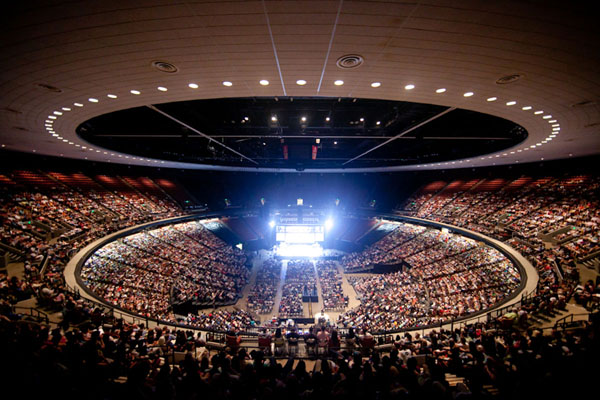 The scene on Easter Sunday at the Erwin Center—click to enlarge. (Credit: Scott Wade)

My typical horizontal array was less than ideal for this venue. While the floor sounded (and felt) fantastic, you only had to climb a few rows off to the sides before the low-end began to drop off quickly. While some of this can be corrected by delayed arcing (delaying the outside boxes to create a virtual arc), the added difference in arrival times causes the entire array to lose much of its tightness due to smearing in the time domain.

I left that gig determined to find a solution. There had to be a better way to get even coverage, both in front and on the sides, without power alleys or comb filtering. In an ideal situation, the low-end should come from a single source, equidistant from the main left-right hangs. But where would it be located?

This past Easter Sunday, when the church returned to the arena, I had the unique opportunity to try a different approach. Working with local audio providers Big House Sound, we designed and deployed a large-scale, flown, end-fire subwoofer array. This had yet to be tested, but once the rig was in the air, jaws began to drop.

Part of the idea came from fellow engineer/tech Sarah Butt, who had worked under Kenny Chesney system engineer John Mills for one of the “Goin’ Coastal” tour dates at Cowboys Stadium in Arlington. Mills’ design for a large Electro-Voice X-Line rig incorporated two monstrous hangs of subs (20 per hang) flown dead center of down stage, between the mains. The theory made sense – two hangs acting as a single source, dead center of the rig, with no cancellations or drop-offs anywhere in the venue. This got my brain spinning.

At left, a screen shot of the system modeling; at right, polar data of the “EF6”6 end-fire array, based on a ground stack two cabinets high—click to enlarge. (Credit: Adamson)

There were four primary issues to address in order for my approach to be a success. First, it had to be cost-effective. This is already an expensive gig, and I couldn’t afford to add a lot more boxes. Second, we needed to take advantage of the 90-degree off-axis null directly beneath a vertically flown sub array to reduce the back-pressure on stage. Third, the arrays needed to be short, since longer arrays reduce vertical coverage by making the hang more directional. They needed to behave as a point source.

Finally, we needed it to be cardioid. I’ve found that the boomy low-end in arenas typically results in me pushing the subs harder to get that tight “feel” I’m looking for. On the flip side, I tend to use less low-end in my mixes with cardioid subs, attaining a clean, tight feel at lower levels when I’m not dealing with a lot of late reflections from all of that backfiring energy.