Vampire Weekend is currently touring North America in support of its fourth studio album, Father of the Bride, which has been heralded by Rolling Stone as a “modern California pop masterpiece.”

Much has changed over the past six years, when the band released its previous record, Modern Vampires of the City, but one thing that hasn’t is the group’s continued use of L-Acoustics loudspeakers for its touring PA.

Serving as Vampire Weekend’s front of house engineer for over a decade, Neil Heal has long been a fan of the French manufacturer’s products. “L-Acoustics is simply one of the very best systems out there, and I love the scalability of K1, K2, and Kara all sounding consistently great and working together seamlessly,” he says. “We’re primarily using K2 mains and Kara outfills on this tour, and I also love the fact that the arrays go down so low, frequency-wise, without ever being muddy. We could almost do shows without the subs, but they’re certainly nice for moving the air.”

For the current North American trek, Solotech front of house systems engineer Ben Malone notes that the typical system configuration for most venues comprises left and right arrays of 18 K2 per side, with adjacent outfill arrays of 12 Kara on each side for outfill coverage. Six additional Kara are spread across the stage lip for frontfill, while four ARCS II provide outfill near the front. A dozen KS28 subs anchor the low-end reinforcement, and the entire system is powered by 24 LA12X and six LA8 amplified controllers.

No stranger to using L-Acoustics Soundvision software to set up each show, Malone has been using the program’s new Autosolvers for the first time with stellar results. “The Autosplay tool, in particular, is fantastic,” he shares. “The fact that the user can see it trying different angles as it works through calculations is actually a big confidence builder in the tool. It can get things very close to a suitable deployment much faster than via user trial and error, so I’ll use it and then tweak angles a bit from there. I’ve used the FIR filter tool as well, but use my own discretion on whether I bring those settings over to LA Network Manager—which I love—on a show-by-show basis. Soundvision has been very accurate in my experience, which also helps speed up the mornings as I work out how we’re going to deploy the rig, since I can trust the info I’m being shown.” 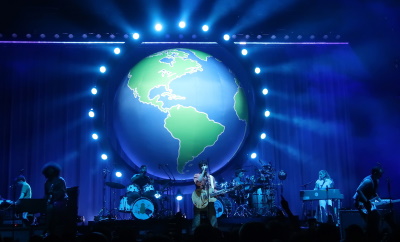 Malone notes that Soundvision’s speed and accuracy were particularly appreciated for two special sold-out shows that that band performed in the round at Boston’s Agganis Arena and NYC’s Madison Square Garden in early September. “These shows were both in the round, but not with a traditional centered stage—we sold 360 degrees but still with the end-stage configuration of a normal arena show.”

For these stops, the Solotech crew reconfigured its touring rig and had the K2 serve as two 16-enclosure side hangs, with the 12 Kara per side moved to address the 270-degree areas. These systems were augmented with main L/R hangs of 12 K1 over six K2, and an additional pair of 12 Kara arrays to cover the 360-degree rear seating sections. Subs were set up as a three-deep end-fire array, in pairs for six KS28 per side, at downstage left and right with the farthest pair of subs being well downstage of the landing point of the mains.

Back at the front of house mix position, Heal—who spends most of his time behind a DiGiCo SD5 console topped with a pair of compact self-powered L-Acoustics 108P for nearfield monitoring—is very much enjoying the sound that the rig is delivering night after night, especially as the band’s production needs have increased since past tours.

“With the new album, the band’s lineup and inputs have grown massively since the early days,” Heal recalls. “When I first started with them, I think they were a four-piece with 24 inputs; now it’s a seven-piece and, with FX and all, the show’s input count is closer to 120. All the reviews I have read have commented very much on how much bigger, more exciting, and better the band sound after the lineup change. They do sound huge at the moment and the clarity I’m being given every day from the SD5 and K2 combination means I am able to get really good separation on every input. I can really place everything where it needs to be in the mix and nothing is clouded out.

“I was initially concerned how it would all work out with so many inputs, but it’s actually been a breeze and the fidelity and coverage we’re able to get with the system each night—from the Kara frontfills to the K2 throw at the back of the room—have been brilliant.”