Simulating A Live Drum Solo In The Studio

Suppose you just recorded a band in a club to create a live album.

A few days after the gig, the drummer asks, “Can I play a drum solo in your studio, and have you add it to the album? I want it to sound “live”, as if I played it at the gig.”

This happened to me. We recorded a drum solo in the studio, then edited it onto the beginning of one of the live-recorded songs. People listening to the final CD thought that the solo was part of the set.

I’ll offer some suggestions on how to simulate a live, in-the-venue drum solo after the fact.

The techniques described here also apply to overdubbing other musical parts in the studio to replace flawed live performances.

Here’s the basic procedure:
1. In the studio, try to duplicate the miking setup that you used live. Match the microphone models and placement.
2. Record the instrument in a dry, neutral studio if possible.
3. Then add some artificial reverb that sounds like the live venue’s reverb. Set the reverb parameters to re-create your memory of the venue’s reverb time, degree of warmth, and so on.
4. Enhance the tracks with EQ, gating and compression as needed.
5. Add crowd noise and applause.

I put some mp3 samples of the recorded drum solo in this article so you can click on them and hear the results. If your playback stutters, right-click the samples to download them first, then play them.

The Finished Mix
Let’s listen to the studio-recorded drum solo after it has been enhanced to sound “live”.

As you can hear, we added some crowd reaction and reverb to the dry studio tracks in order to simulate a live recording. 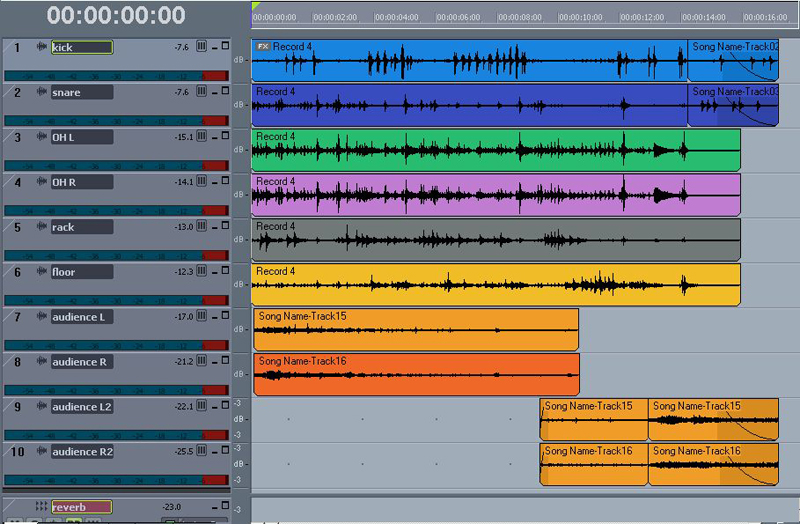 There’s also a reverb plug-in inserted into a stereo bus. The snare and toms have sends to that reverb bus.