During a recent sound reinforcement renovation at Signal-Iduna-Park in Dortmund, Germany, new state of the art technology was combined with older components to create a system that would ensure perfect coverage of the soccer stadium.

Signal-Iduna-Park is the home of Borussia Dortmund, the 2011 and 2012 German champions. To cover the tiered seating in the soccer arena, 14 RCF TTL 33A line array units were installed at the stadium utilizing a custom BGV-C1 compliant mounting system.

Each array consists of 14 RCF TTL 33A modules along with a subwoofer. The custom mounting system provides accessibility to the arrays via a cable. Because the line array is self-powered, only one power supply, two signal lines (A/B) and two control buses (A/B) are required to make each unit redundant.

RCF’s new amplifiers modules provide an impedance monitoring option on all chassis that are integrated in the speaker, with reporting carried out via bus systems.

Eighteen of the units in use for the sound system play a dual role in the arena – when rotated 180 degrees they can be used to evacuate the stadium’s inside areas (the pitch).

Closed signal distribution of security footage is implemented via eight ATEIS IDA8 units (EN54-16 compliant) in a optic fiber ring, which communicate directly with the line arrays with regards to signal monitoring. 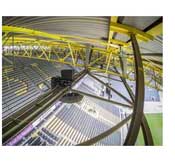 Key facts about the installation:

– Speakers configured as a line array system can provides significant acoustic advantages over distribution via individual speakers. When a distributed solution is used, the sound waves from several speakers reach listeners at different times, which can result in phase cancellations and reduced sound quality.

– Monitoring of the line arrays is fully integrated into the voice alarm system concept. Speaker failures or outages in the amplifier components are immediately reported to and recorded in the voice alarm system, and transmitted to the central building control system. Using PC software, a technician can carry out an accurate error analysis whereby even the failure of a single speaker chassis can be accurately located.

– All audio signal routing is conducted via the voice alarm systems manufactured by ATEIS. Additional, unmonitored audio routers can be omitted, ensuring the highest levels of reliability and the immediate detection of faults.

– The network technology between the stands’ alarm systems is fully redundant with its fibre optic ring feature.

– The system can very easily be extended at any time. Additional audio inputs and outputs can easily be integrated by installing additional components.

– Operating the system and visualising its operating status is carried out sophisticatedly and intuitively via a media control that uses graphically appealing user interfaces. The increased demands placed on a stadium sound system can be met in a way that takes into consideration the use of the system outside of game days.