Carefully conceived and implemented sound reinforcement systems at performing arts and theatre venues typically produce excellent results, in general, because they can be purpose-designed for the venue.

The system’s electronic backbone can be “tricked out” to meet a wide range of applications, while the particular performance parameters of loudspeakers can be matched to coverage needs.

Still, the loudspeakers need to be well-suited to present diverse source material as it is intended to be heard – slamming rock n’ roll to classical, Broadway musicals to opera… And don’t forget the importance of vocal intelligibility for spoken word.

Many manufacturers serve the market well by offering “install” versions of touring loudspeakers, including the option of specific rigging capabilities.

So while professional loudspeakers are built to travel, sometimes they don’t need to go anywhere to fulfill their role. Let’s take a look at one recent installed loudspeaker project here, and then be sure to take our Showcase Gallery Tour of many other projects from around the globe.

A 2,200-seat jewel at the AT&T Performing Arts Center that is the cultural nexus of the city’s revitalized downtown arts district that serves as the home of the Dallas Opera. The theater design was provided by Theater Projects Consultants and acoustician Sound Space Design. 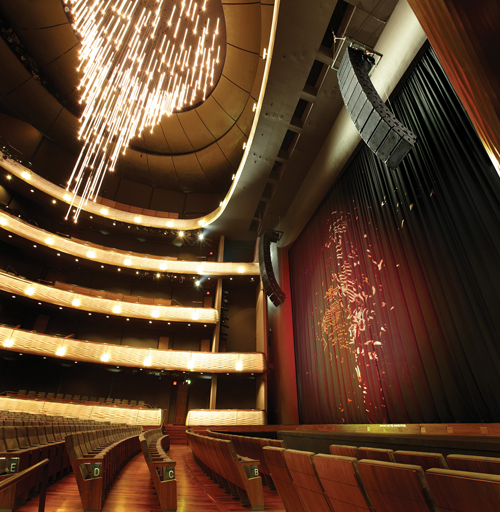 Renkus-Heinz STLA/9R arrays that retract into the ceiling at the Winspear Opera House. (click to enlarge)

Just across the way, Annette Strauss Square is an outdoor performance venue that hosts concerts, theatrical and dance performances and festivals, with open-air seating for up to 2,400. As technical supervisor Jeff Stephens explains, the Square’s relatively close proximity, not only to the other venues but also to the surrounding condominiums, created a few challenges in system design.

The system here, also designed by Van Dijk, employs left and right arrays of ten STLA/9R boxes per side, along with six DR18-2 dual 18-inch subwoofers for low frequency power. A ring of SG42 two-way powered loudspeakers acts as a delay fill. “We use the delay fill so we don’t have to drive the main PA quite as hard, which helps to keep the energy off the (adjacent) Meyerson Auditorium,” says Stephens.

Take our Showcase Gallery Tour to read about more.