Critics call this production, presented at Planet Hollywood’s Saxe Theatre, “the closest you can get to a real Beatles concert.”

Front of house mix producer/engineer Mick McCoy, with a long track record of working with Yamaha digital consoles, selected a Yamaha PM5D for his work.

He cites the two biggest pluses as recallability and reliability, adding, “The integration of Logic and a dedicated I-Mac show control is something I’ve worked on for about two years.

“I use a MOTU D/A to run multiple streams of audio, including a tempo map and cues to musicians, all getting stereo in-ear mixes from the PM5D, and stage monitors that are active terraced versions of the house mix—a very easy and cool 5D trick.”

In addition, a “tech track” or stage manager in a box connects to Clear-Com to direct technicians on scenic moves and cues. MIDI output also controls scene changes on the Yamaha PM5D. 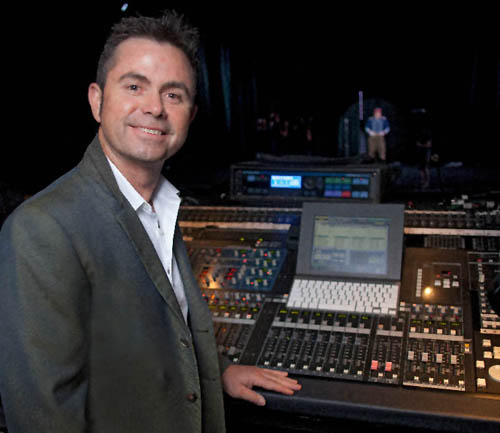 “Out of hundreds of cues for the show, there are only four scene changes on the Yamaha PM5D that need to be triggered manually, and this is done via a switchbox I built for just a few dollars to address the GPI port on the console,” McCoy says.

“It enables me and other engineers to be out of the booth and ‘in the field’ where our ears should be.

“A PC laptop with Yamaha Studio Manager running on it is wirelessly connected through an inexpensive router, so tweaking audio from the house is possible, including ancillary systems like front fills and monitors.”

When front of house engineer Billy Huelin first began working with Darius Rucker, it was 1992 and Hootie & the Blowfish was a popular bar band on the Carolina college circuit.

“I was one of the last to go digital,” says Huelin. “I was always happy with my Midas XL4, and never heard a compelling argument to change, because none of the digital consoles sounded as good.” 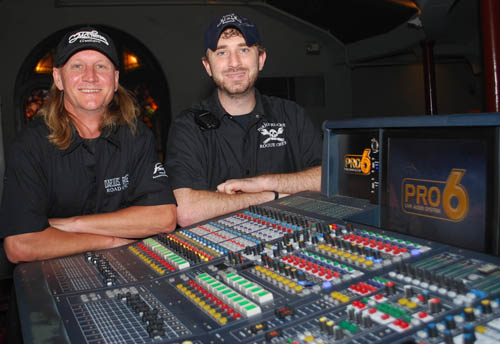 With sound quality as his primary focus, the PRO6 passed Huelin’s ear test.

“The Midas digital platform is the only one I’ve heard that places the proper importance on signal flow and gain structure,” he asserts. “Midas did a great job of emulating their analog preamps, using two gain stages. The preamps and EQ are the heart and soul of the console, and they are accurate and true. It’s like I never left the XL4. I just moved to something newer.”

Stickrod is the new kid on the block, having been with Rucker for four years. “When I started with Darius, I inherited a different digital console with about 350 scenes saved, which is what it took to run a Hootie show. That certainly made it easier for me to hit the ground running,” he says. “But after my first year, with Darius making the transition to country, I did the research and proposed switching to a PRO6 for monitors, which has worked out great.”