This marks the fifth year for WFX, and like the overall worship AV systems market, the show keeps growing steadily in both size and sophistication.

An impressive educational program anchors the event, with top system professionals from throughout North America leading packed sessions of varying levels of sophistication.

There’s something for every level, ranging from newbie volunteer sound operators through experienced technical ministry leaders.

Also impressive is the level of support that manufacturers lend to the educational effort, and this year, Yamaha in particular took a lead role, offering a wide variety of hands-on digital and analog mixing courses at regular intervals throughout the show. 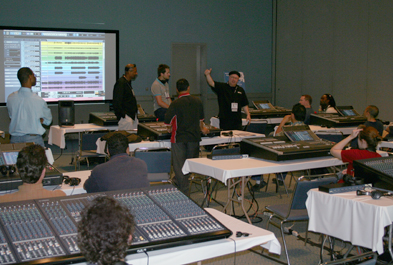 Plenty of consoles for plenty of hands-on opportunities provided by Yamaha. (Click to enlarge.)

I sat in for a couple of these sessions and came away impressed with how well the presenters understand the challenges and realities faced by worship system folks.

The commitment to providing sufficient consoles available for use in the classroom to truly live up to the “hands on” mantra shouldn’t go without mention, either.

WFX also offers a trade show exhibition floor, with some of the most notable action centering upon digital consoles.

Case in point was my first stop, at the Digidesign booth, where Robert Scovill supplied a tour of the brand-new VENUE SC48, which is quite well suited for worship applications in terms of function, features, footprint and affordability. 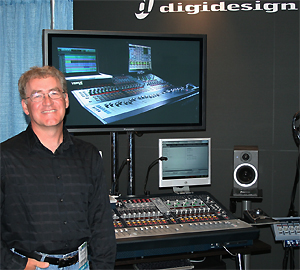 Robert Scovill at WFX with the brand-new Digidesign VENUE SC48. (Click to enlarge.)

The company calls the SC48 a “fully integrated live sound system” and it’s easy to see why, as it combines I/O, digital signal processing, and tactile control into a single console, joined by wide ranging plug-in support as well as seamless integration with Pro Tools LE systems.

A feature that seems especially ideal for church applications is Channel Control, where a single button working with the console’s eight color-coded rotary encoders provides access and control of any channel strip function – input parameters, Aux sends, equalization and dynamics. The operation is intuitive, with the additional color coding really standing out to make it even easier.

Next stop was RSS/Roland Systems Group, which was highlighting Version 2 of its popular V-Mixer M-400 live digital mixing console. 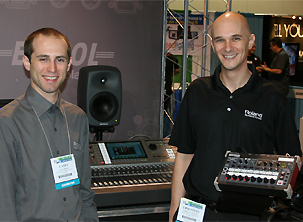 This new version points to another area of sustained and still continuing growth in the worship market, personal monitoring systems.

Not only does V-Mixer provide a wide range of commensurate digital console features and functionality, it now also offers a Left-Center-Right mode and most significantly, supports RSS M-48 live personal mixers.

Specifically, V-Mixer can set up, configure and control multiple M-48 mixers that are enabled with REAC, the company’s digital audio transfer protocol. This is a great advantage for a worship system operator who may be responsible for house and monitors simultaneously – it provides individual musicians on the platform with the ability to control and tailor their own monitor mixes.

Yamaha also had a booth full of its latest consoles as well as the growing line of NEXO loudspeakers. 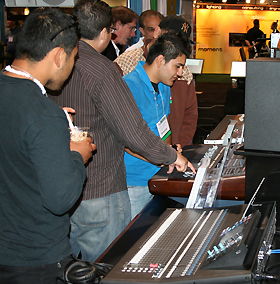 The M7CL digital console has proven exceptionally popular in worship applications, available in 32- and 48-channel versions.

On display was the new version 2 software for the M7CL, highlighted by a Global Paste feature that enables simultaneous editing of multiple scenes, and Matrix Sends on Fader, providing access to 24 mix buses.

Aviom, a company that really brought personal monitoring to the fore, was just down the aisle. As a matter of fact, an Aviom Pro16 monitor mixing system was recently used for the Mighty Men Conference 2009 in South Africa, one of the country’s largest annual Christian events with more than 200,000 in attendance. 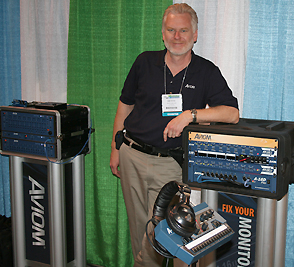 The current product line continues to grow in popularity, with more options coming along at regular intervals, and I was also told that some significant new developments will be ready for unveiling at the upcoming 2009 InfoComm show in Orlando. If you’re there, be sure to stop by the Aviom booth to check it out.

In bonus news, a great good long-time friend, Denny McLane, recently joined Aviom as Western U.S. Sales Director, which is super news both for the company and especially its customers.

Another product caught my eye at this year’s WFX, a new cardioid version of the Da-Cappo Earset Micro microphone (distributed by Hosa Technologies). 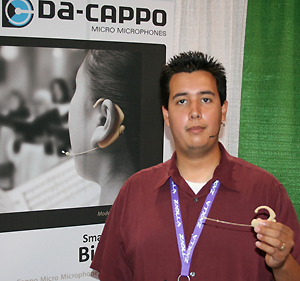 Previously this design was limited to an omni version, with the cardioid development opening up many more live sound applications.

One other notable note from WFX: At the hotel prior to the kick-off of day 2 of the show , I ran into Vance Breshears, a leading AV system and acoustical design consultant, and he greeted me with an unexpected yet very cool update: His firm, Sound Technology Consultants (STC), has merged with Acoustic Dimensions, reuniting Vance and his team with Craig Janssen and his team.

Vance and Craig had gotten together with David Kahn in forming Acoustic Dimensions in the early 1990s, which has gone on to complete hundreds of successful projects at churches, entertainment venues, major stadiums and other venues around the globe. Speaking from first-hand experience in visiting and writing about several of these projects, I can comfortably state that Acoustic Dimensions has more than earned its very high reputation for innovation and overall excellence. 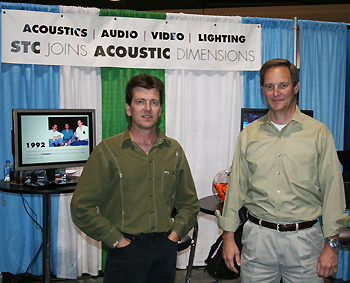 Vance departed in the mid-90s to San Diego so that he and his wife could be closer to family, forming STC. But last year, Craig and Vance began rekindling thoughts of collaborating, and particularly with modern communications evolving to such a great degree that offices thousands of miles apart can function together seamlessly, they could see a lot of advantages of re-teaming.

The culmination is that STC is now the West Coast office of Acoustic Dimensions, joining with other facilities in Dallas, New York and the U.K.

“The advantages are undeniable: efficiencies of scale, shared resources, an expanded pool of talent, greater geographical reach,” Vance told me, with Craig adding, “Perhaps most importantly, there was a common vision for the future—one based on innovation.”