As headliners of the 2013 Summer Tour, Matchbox Twenty gives public expression to not only the post-grunge music that vaulted the band into the limelight in the late-‘90s, but to its newer material and covers of all sorts.

Behind-the-scenes, it’s a community effort on all levels, grounded with solid production values that would easily make the show a contender for “Best Place to Work in Live Audio” honors if such an award actually existed.

“I’m extremely fortunate on this gig,” front of house engineer Toby Francis told me during a quiet pre-show moment at the Mohegan Sun in Uncasville, CT, the only casino on a tour filled largely with sheds and theatres. “I walked into a show that has a rich legacy of sounding fabulous all the time. A large part of this ongoing success is due to good work habits.”

It’s hard to argue with Francis’ assessment of his current situation when you consider that MB20 came up in the business under the direct tutelage of noted front of house engineer Robert Scovill. “From virtually the beginning, Robert instilled the band with all the right professional, personal, and technical values,” Francis states. “Being highly intelligent and open-minded, the band took all of his wisdom to heart. There’s no stage volume on this show at all. Everything is isolated offstage. The band sings at appropriate levels to the task, uses their ear monitors properly, and doesn’t run their packs louder than they should.

“Everything is done with shared effort, it’s a joy to mix them, the tones are simply amazing. I can’t emphasize enough that what I’m experiencing today is the direct result of techniques that were adopted years ago.” 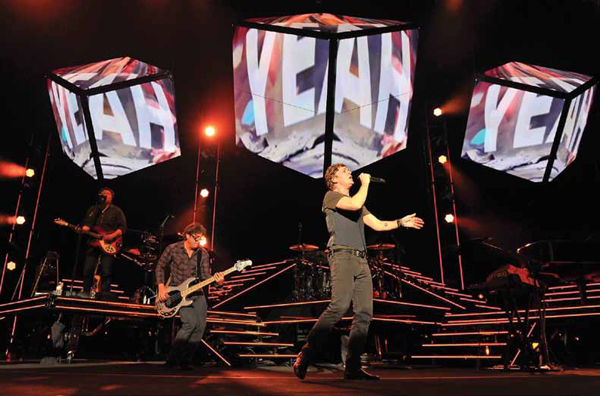 Matchbox Twenty performing on the current tour. (click to enlarge)

Totally Clean
Francis, joined on this tour by monitor engineer Bob Lewis and Clair Global crew members including system engineer Andrew Baldwin and tech Jason Hoffman, can recall numerous other gigs where he stood in front of bands posting 110 dB or more onstage, and the snare drum from the drum monitor was louder than the whole band.

“In that kind of environment every mic is affected,” Francis explains. “Your job out front becomes more of a task of eliminating what you don’t need instead of enhancing the true sound. If you have a big amp line, all of the drum mics are affected, as are all of the vocal mics. You’re constantly compromising and struggling just to get back to level ground. 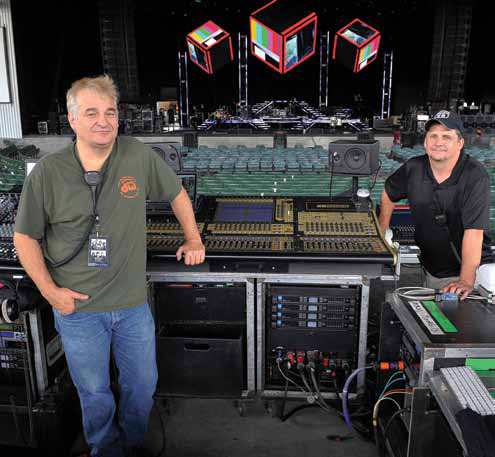 “When I first started with Matchbox Twenty I went back and listened to multitracks of the shows. All of the tracks were totally clean. Nothing has changed today. If I turn off the vocals in the mix, you don’t hear them anymore. They aren’t bleeding into any other mics, except for maybe almost imperceptibly in the high-hat at times.”

A Clair i5-based PA brings the band’s sound to audiences, running 12 per side in conjunction with a dozen i5b cabinets. Four-way in configuration, the rig gains the benefits of side hangs deployed as needed using Clair’s new micro-boxes. Crown 3600s deliver power, while Lake LM44 processing is the order of the day.