ESI Audio, formerly known as E-Tech Systems of Tampa, deployed most of its 72 NEXO GEO-T line array boxes at more than 10 pregame parties and rallies, and many of these events also utilized Yamaha consoles.

At the recent Super Bowl XLIII in Tampa, the sound reinforcement systems for pregame and halftime performances, as well as several sound systems for related events, featured Yamaha digital consoles.

Meanwhile, Mike Wolf of Clair notes that a PM5D was used in the monitor rigs at both the Tampa Pepsi Smash and the NFL Saturday Night Bash in Orlando prior to the game. Another PM5D, provided by ASR Pro Events of Orlando, was used at front of house for a performance by Tony Bennett at the NFL Owners Party.

ESI Audio, formerly known as E-Tech Systems of Tampa, deployed most of its 72 NEXO GEO-T line array boxes at approximately more than 10 pregame parties and rallies, and many of these events also utilized Yamaha consoles. 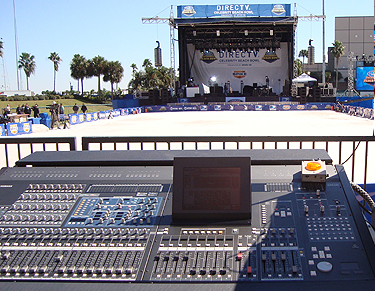 The scene for a concert at Progress Energy Park for DirecTV with a Yamaha PM5D-RH and loads of NEXO GEO-T line arrays and subs.

Further, two more PM5D-RH consoles, along with 10 GEO-T 4805s, two GEO T 2815s for downfill, and eight NEXO S2 subs, were provided for a performance by Wyclef Jean and Sean Kingston at the J.P. Morgan Event Center for ESPN.

In addition, another LS9-32 console and 16 NEXO PS8 loudspeakers were featured for an NFL Players Association jazz gig, while 14 GEO T 4805s and four GEO T 2815s for downfill were utilized at a Sarah Evans concert. Both were held at the Tampa Bay Performing Arts Center.

The busy ESI Audio also supplied the Maxim Party at the Ritz Theater with an M7CL-48 console, the NFL Players Association DJ with an M7CL-48 at A La Carte; and a concert at Progress Energy Park for DirecTV with a PM5D-RH, 14 GEO-T 4805s, four GEO-T 2815 for downfill, and 16 CD18 subs.