The Chelsea Music Festival features musical styles running the gamut from classical to jazz, as well as visual and culinary experiences to complement them, its crowd mirrors the diversity of its programming.

This year’s festival utilized the St. Paul’s German Lutheran Church as the marquee location for its opening and closing weekend performances. Built in 1884-85 in the Romanesque Revivalist style, it is not only notable for its appearance but also for the acoustics of its main chapel.

For the first time, live recording experts Jim Anderson and Ulrike Schwarz of Anderson Audio New York were on hand to capture every note performed there during the festival for delivery via Sennheiser’s immersive AMBEO 3D audio format.

The idea for a 3D capture of the performances germinated during last year’s festival, which Anderson and Schwarz had attended as guests.

“We were very impressed with the level of musicianship at the festival, and when we heard that several performances would take place at St. Paul’s our interest was further piqued,” says Anderson. “This chapel was legendary in the 80s and 90s for serving as the location for many audiophile recordings of classical and jazz music.”

Anderson and Schwarz had also recently experienced Sennheiser’s AMBEO 3D immersive audio format in a demonstration at Sennheiser’s pop-up store in SoHo, and realized the potential for a totally unique recording of a live performance using the format. It was not long before they contacted Sennheiser and with the German audio innovator on-board as a festival sponsor, worked together on selecting the perfect Sennheiser microphones to capture every nuance of each memorable performance.

Anderson and Schwarz’s miking solution consisted of ten fixed microphones suspended from wires stretched across the chapel. These included four MKH 800 TWIN microphones suspended above the main seating area above balcony level in a square. A pair of MKH 800 mics and a pair of MKHC 8020 omnidirectional capsules connected to MZE 8120 extension tubes constituted a second, lower square, suspended just below balcony level.

“Together they create the AMBEO Cube,” Anderson explains. A pair of MKH 8020 microphones were mounted on an A/B bar above the audience at front, facing the stage directly.

The MKH 800 TWIN microphones offer incredible versatility for AMBEO 3D recording applications due to their unique dual independent capsule design. Unlike other dual capsule microphones, each of the MKH 800 TWIN’s back-to-back capsules has its own audio output, enabling users to conveniently set and modify the microphone’s polar pattern on the mixing desk, either in the recording process or during post production.

Also, equalization can be applied separately to the front and rear of the pickup area to correct room imbalances. “Having that kind of flexibility in the mix stage is very exciting,” Schwarz says.

Anderson Audio New York’s recording setup was only equipped to handle 24 channels this year, so building their entire AMBEO cube with 8 MKH 800 TWIN mics was not feasible while accommodating their other miking needs, but they were able to turn to other Sennheiser microphones to round out their sound, including a longstanding favorite: the original MKH 800.

“We have both found that the MKH 800 is an exceptional microphone,” Anderson says. Schwarz agrees: “I started using it on pianos a couple of years ago. I’ve never heard bass reception like that.” With the MKH 800’s flexible polar pattern controls they were able to dial in a wide cardioid pickup pattern that was perfect for the front of the AMBEO mic cube, flanking their A/B pair.

For the lower rear pair, line of sight concerns were paramount due to video cameras positioned on the rear balcony, which led Anderson and Schwarz to turn to a pair of Sennheiser’s MKHC 8020 microphone heads suspended from MZE 8120 extension tubes for a compact, omnidirectional solution with deep low-end extension down to 10 Hz.

A pair of MKH 8020 microphones constituted their main A/B pair and provided an excellent stereo capture of anything the festival put in front of them, which will allow them to enhance the focal point of the audio recording during their AMBEO mixdown as needed.

“We’ve had string quartets, piano trios, jazz combos, and we’ve really been able to cover them all quite well with only the occasional spot mic needed if the staging was going very far back,” Anderson says.

“We even had a piano quintet,” Schwarz adds. Those individual spot microphones included a Sennheiser MKH 8040 cardioid microphone and the active tube system of the MKH 8000 series, which saw use as a free-standing drum overhead during select programs.

For Anderson and Schwarz, recording this year’s Chelsea Music Festival in AMBEO 3D is a chance to preserve these intimate performances in high fidelity with an added component.

“I really think it captures the energy of the performances,” Schwarz says. “You get the perspective of the audience being there live in the room, but you also have an optimized recording from the closer microphones. Bass-heavy instruments in particular sound so much better when you bring them into 3D. So I expect both the performances and recording clarity to be spectacular.”

Anderson hopes that their efforts will help illuminate the possibilities of AMBEO. “These are microphones we use all the time, and it’s fun to have a chance to put them in this situation and stretch them a bit with AMBEO,” he says. “I think that when people hear these recordings they’ll be inspired to do more of this kind of thing.” 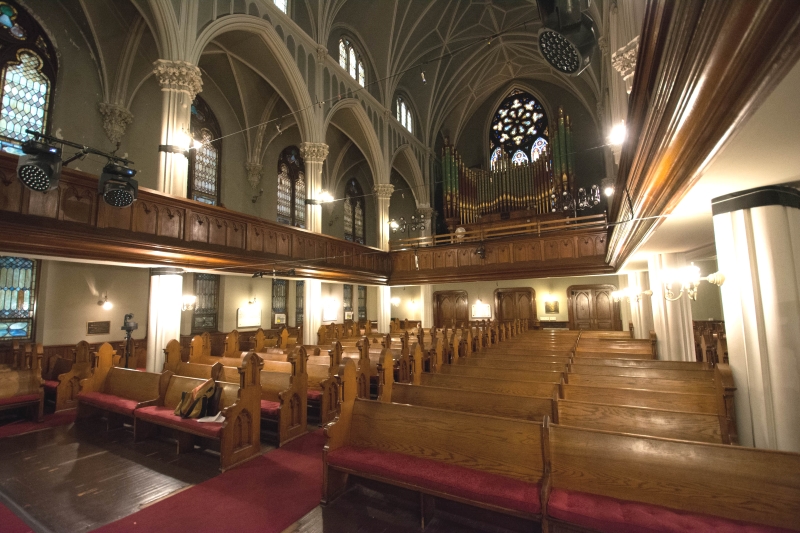 For the festival’s artistic directors Melinda and Ken-David Masur, these recordings represent an opportunity not only to preserve a memorable experience, but also to share it with a wider audience.

“Recreating the atmosphere of an unforgettable musical event is very special and we recognize that Sennheiser is leading the way in finding ways to turn an aural recording into an emotional journey,” Masur says.

“We hope to use these recordings to share the extraordinary works we perform, embedded with the personality of the space, with as many people as possible. We at the Chelsea Music Festival believe that the music and art presented here has a unique power to elevate the human spirit, and these recordings, powered by Sennheiser, will allow us to bring an awareness of that experience to as many people as possible.”

Read More
In The Studio: How The Sync Head (And The Overdub) Changed Recording Forever

New 32-channel analog in-line mixing console replaces vintage desk in Studio A at the 6,000-square-foot complex that opened in 2017 and has produced six ...read more →

With 80 inputs and Recall across all 40 channels, large-format digital-controlled analog desk is designed to deliver workflow benefits, especially on large recording sessions.

For Stryper's "Even the Devil Believes,” the first recording at the new facility, chief engineer/producer engineer Danny Bernini employs a variety of Telefunken mics ...read more →

Pro Tools and Pro Tools Ultimate from version 2020.11 on come with a full version of Melodyne 5 essential.