When sound reinforcement provider Firehouse Productions came on board to handle sound for NBC’s live production of Andrew Lloyd Webber’s rock opera Jesus Christ Superstar in April of this year, the company knew that it would take more than careful planning and execution to deliver a seamless theatrical experience.

It would also require wireless technology that delivered the reliability and sound such a production demands. Firehouse turned to Sennheiser’s Digital 6000 and Digital 9000 wireless systems to ensure the highest level of quality within the demanding context of a live television musical.

For audio producer Mark Dittmar, who oversaw the design, layout and coordination of audio for Jesus Christ Superstar, reliability was a paramount concern from the earliest planning stages. “Number one, everything has to work,” he says. “It doesn’t matter how good or bad it sounds if it’s off.”

Beyond reliability, Dittmar cited repeatability as key. “We knew we would have a compressed time schedule, so it was important to know that we could get everyone miked up exactly and each pack transmitting the same way some 12 or so times before we get on air.” Lastly, Dittmar sought to deliver the best possible sound quality. “I want sound quality to be perfect on a production like this,” he says, “but it can’t come at the expense of reliability.” To fulfill the marriage of these requirements, he turned to Sennheiser. 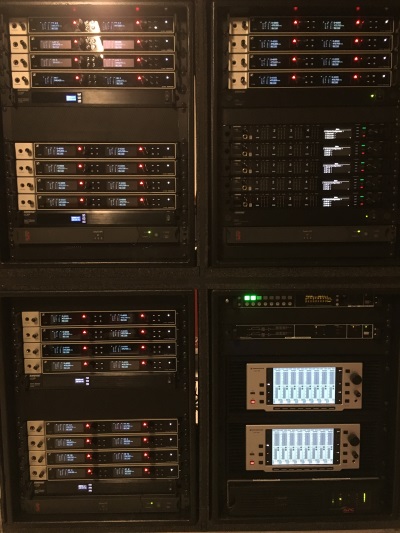 “We decided on Sennheiser pretty early on,” Dittmar says. “The Digital 6000 is a spectacular platform. For a show this big with this tight of a rehearsal schedule, the power and flexibility of the Sennheiser wireless is just bulletproof.” Sennheiser’s digital transmission capabilities helped him simplify his antenna setup while retaining clarity. “The new digital RF stages are spectacular,” he said. “They get more coverage with less effort, so we don’t have to place antennas all over the place.”

RF coordinator Luis Espinal associates the Sennheiser brand with past successes. “I have had terrific experiences with Sennheiser for RF.” Both Dittmar and Espinal knew that they would have only limited time to get the complex setup up and running, so turning to a trusted manufacturer was a given.

“The entire onsite rehearsal process was nine days,” says Dittmar. “When we got on site, we loaded in on Monday and by Thursday we were sound checking 150 inputs, including 48 cast members with 8 mixing boards. It was relentless.” Espinal said the schedule was even more harried than it looked at a glance. “From my point of view, we only had two days to put this up and make it work, because by day three the mixers need to check every mike and every location and then Day 4 they start focusing on the mix and can’t mess with RF,” he explained.

The coordination of 170 channels of wireless was made even more challenging by the demanding RF environment in which the show was held: the New York State Armory in Brooklyn. “The room was large—300 feet by 500 feet—and we had actors entering all over the place,” Dittmar says. “Not to mention we were right in the middle of Brooklyn, and some of the packs needed to work outside or near a completely open door, so it’s not like we were in a completely isolated space, not even close.”

Thankfully, Sennheiser digital technology made coordinating 62 channels of Digital 6000 and Digital 9000 fast and easy, even in a challenging RF environment. “It was really nice that I could pack up all these mikes almost as close as 0.6 MHz,” says Espinal. Even in such close quarters, he felt fully confident in the signal integrity. “With Sennheiser digital, no matter how hard the performers were hitting the mikes the signal would stay consistent, it didn’t modulate like a normal analog transmitter would have done, which eliminated the risk of it opening up and spilling to other mikes’ channels.”

To make matters more complicated, the performance featured a live audience of 1,500 with bleacher style seating. “At the top of the show, we have the Judas character inside 20 people in the audience, each of whom have purses, backpacks, or heavy jackets because it’s winter in NYC,” Espinal says. “Other products would have taken a pretty heavy hit in performance, but with the Sennheiser packs there was no difference from when he was center stage. These things are nuts.”

Aside from the company’s digital RF, the scales were tipped in favor of choosing Sennheiser further due to the compactness and durability of the SK 9000 and SK 6000 bodypack transmitters. “We had nine principles, each of whom was double miked, and the rest of the ensemble and dancers would be single miked, so there’s a lot of stuff hanging on our actors,” Espinal says. “The costuming is such that there are a lot of people without shirts or with very open clothing, so there’s a lot of RF rigging through the legs or lower hips or sides. That made size and weight very important, and the Sennheiser packs had a clear lead in that department.”

Espinal also notes that the need for reliability extended beyond signal integrity alone. “The LEMO connectors on the Digital 6000 and Digital 9000 products were really important because there are a lot of quick changes,” he says. “If we had used some of the other standard connectors out there we would have needed triple the amount of backups because they would be breaking left and right. When you’ve got only seconds to swap elements for key characters, LEMO is the way to go, 100%.”

The Sennheiser bodypacks gave Espinal up to 6 hours of battery life, which was key during long days. “On dress rehearsal and show days they would start miking people at 7 p.m. and the show didn’t go into rehearsal until 10 p.m., so we needed the battery to last. Also, the Sennheiser batteries don’t get as hot as other manufacturers’ batteries, which is extremely important because the packs were right next to the performers’ skin in most cases.”

Espinal also utilized Sennheiser’s Wireless Systems Manager (WSM) software platform to monitor battery and wireless performance of the complex system. “WSM was great as always,” he says. “It gives you all that you need to see, including battery level for each pack.” This improved Espinal’s workflow throughout rehearsals and the performance, making precise tracking of each bodypack’s charge level significantly easier. “I have six production audio technicians calling out numbers to me rapid fire for checks, and when you have this many mikes it’s not practical to try to visually ID each corresponding receiver on the fly,” he explains. “With WSM, I have four screens all networked together and it’s all right in front of me.”

For Dittmar, Jesus Christ Superstar presented both a daunting challenge and exciting chance to showcase the skill of Firehouse Productions’ team and the performance of Sennheiser digital wireless. “This project was both harder and easier than any other live television musical we’ve done before,” he said. “It was harder because we had over 150 inputs, which is massive. But it was easier because we had the right resources for the job, both in terms of personnel and equipment.”

The reliability of Sennheiser’s Digital 6000 and Digital 9000 allowed Dittmar and his team to focus their energies on capturing the magic of a live performance with live music in front of a real studio audience. “We didn’t have a single failure of a mike, not even during rehearsal. It’s that good.” For Espinal, Sennheiser’s performance was something to behold. “The isolation is terrific, it’s pristine, and so on point overall,” he says. “It’s just beautiful to look at.”