Self-Powered L-Acoustics Boxes Chosen By Shepherd Of The Hills

The P Series boxes have performed very well and the positive comments have been continual.

With over 7,000 weekend worshippers and four independent “plant” churches spread throughout the Los Angeles area, Porter Ranch-based Shepherd of the Hills Church is a growing house of worship.

To accommodate its ever-increasing attendance these days, the pastoral and music teams at the church’s flagship location host seven services each weekend in their 1,500-seat sanctuary, which is now home to a self-powered P Series loudspeaker system from L-Acoustics.

Prior to the installation, the church had purchased compact, highly-portable P Series enclosures for several of its satellite locations.

Hal Sacks, Shepherd of the Hills’ director of media arts, and his team were so pleased with their performance that they contacted at L-Acoustics about putting together a new system for their main sanctuary in Porter Ranch.

Together, Sacks and Palmer created a SoundVision model of the sanctuary and came up with an entirely self-powered system design featuring three central arrays – each consisted of just two 112P – hung from the ceiling as a distributed system.

A total of eight 108P are flown from the truss beams as fills, while four SB15P are positioned at the front of the room to deliver LF reinforcement.

The church agreed to the plan and US Audio and Lighting of North Hollywood was called upon to facilitate the sale and installation of the system, which has more than lived up to everyone’s expectations.

“Even though our sanctuary is a difficult room to tame acoustically, the P Series boxes are performing very well and the positive comments have been continual,” says Sacks. “It’s a smooth, warm and rich-sounding system without hype.”

“Another important factor in our decision to go with L-Acoustics was due to the fact we had rented a KUDO system from US Audio several years ago for our Easter Passion Play run.”

“Although it was really overkill for our room, the thing that I enjoyed most about the KUDO boxes, as I do with the P Series, is that you don’t have to drive the system hard for it to sound great!”

“Whether the music is orchestral, R&B, rock or pop, all of these styles ‘breathe’ through these systems. The bottom line is that L-Acoustics makes an excellent product and their people have been great to work with.” 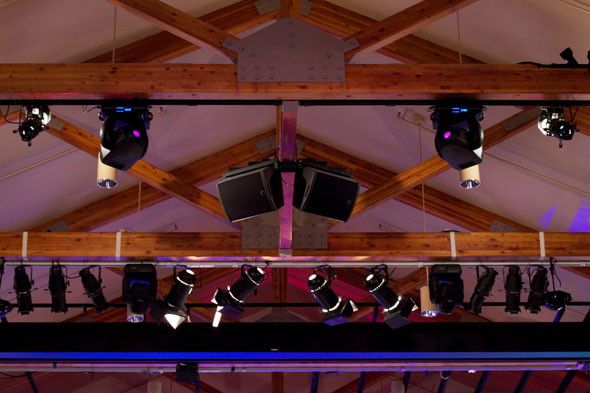 Open House At The Summit Church In Raleigh, NC To Showcase First d&b Soundscape Install In House Of Worship

A headset with a hypercardioid polar pattern and a podium mic with Active Vibration Isolation contribute to a renovation for an acoustically challenging space.