Coventry’s Godiva Festival, which takes place in the City’s War Memorial Park, began life as a free festival back in 1997 (and was described as the UK’s biggest free family festival). For much of the event’s life Chris ‘Stan’ Saunders has been overseeing its evolving technology requirements, as has the company with which he has long been associated, Stage Audio Services (SAS).

This year the event, which now imposes a nominal admission fee for the 120,000 who attend over the weekend, headlined with The Levellers, Feeder and Busted on the respective days.

States SAS owner, Kevin Mobberley, “We’ve been providing event services for Godiva since the year 2000 but this is the first year we have used [Martin Audio] MLA PA. Previously, we have used other brands.” 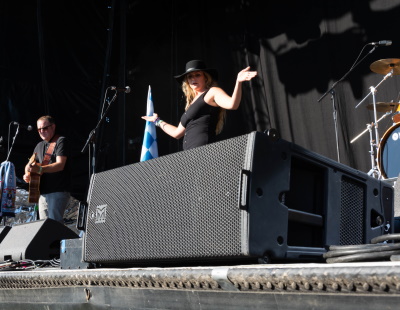 This public park is a highly sensitive noise area, and acousticians Vanguardia are contracted to measure sound propagation and set offsite thresholds—something that the advanced controllability of MLA is equal to meeting. “MLA was our natural choice,” says Mobberley, “and we pushed the organizers in that direction.”

They rigged the full-sized MLA, nine elements per side, with 10 x MLX subwoofers in a cardioid array along the front. Three MLA Compact enclosures provided near-fills and four DD12’s were also on hand should any other gaps have needed plugging in the coverage pattern.

One of the key challenges was the proximity of the two stages, but with programming in the capable hands of Stan Saunders, a fully-qualified MLA operative, sound spillage was kept to a minimum. “I have used MLA quite a few times and it was good to give it some profile at this event,” he said.

The main problem with the Council-run event, he continued, was that the field itself is ‘shifting’ after heavy usage at Radio 2’s Big Weekend. “We’ve moved all over the park with the various stages—but now we have it the best we can to avoid complaints.” He confirms that they were able to meet Vanguardia’s propagation figures of 75dB(A) offsite on Friday and Saturday and further reduction to 70dB(A) on Sunday.

“I assessed the sound after the Friday night and then re-optimized the PA using DISPLAY software to put in a ‘hard avoid’ setting for Saturday and Sunday. Vanguardia were pleased we were able to do this,and we achieved the level we wanted for the stage, particularly for Busted on the Sunday, with no issues.”

As for the audience sound, measured at the front of house mix position, the target level was set at 98dB-99dB. “But we were able to bring it up to just over 100dB without problem.”

The contribution to that figure from the low end was substantial, but highly controlled in the hands of the experienced technical crew. Said Saunders, who aside from system teching, was front of house supervisor and crew chief, “We have been doing cardioid design for sub arrays for a long time, and combined with using a ‘hard avoid’ setting for the MLA arrays we managed to significantly reduce the sound to the rear.

“It also sounded much better, smoother and more even as you walked through the crowd than in recent years.”

“Everyone was really happy with the system,” confirms Kevin Mobberley, whose other crew on the day included Nat Hopkins (on monitors) and Kacper Jelec. 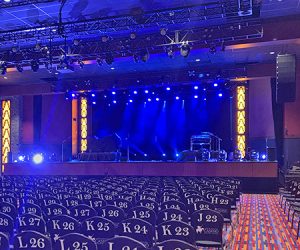