Constructed back in the 1870s as a market, the facility eventually became the Academy of Music in 1886. Then in 1917, the Rajah Shriners purchased it for the purpose of showcasing a range of entertainment including vaudeville, motion pictures and live performances. Sadly, a fire destroyed most of the facility a few years later and the auditorium had to be rebuilt. That was in 1921.

Today, well known as the Santander Performing Arts Center, this vintage facility is home to the Reading Symphony Orchestra and hosts numerous events which have included acts such as Willie Nelson, Alice in Chains, Jerry Seinfeld, David Copperfield, Melissa Etheridge, and many more.

David Farrar, general manager for Santander Performing Arts Center, was well aware of the fact that his 2,000-seat theater was special and would require a custom approach to achieve a consistently powerful sound that show-goers would never forget. Says Farrar, “Clair Brothers provided more than I could have expected with their specifically-customized C8-TrueFit sound system.” 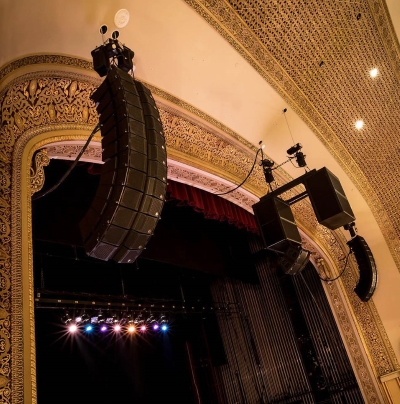 Clair Brothers TrueFit Technology modular, bespoke waveguide provides customization in audio design. Beyond overcoming unique architectural nuances of a historic venue, the new Clair Brothers C8-TrueFit system had to bring out the best for a wide range of performances, from children’s shows and comedians to orchestral performances and heavy metal bands.

There was no question that Santander would require a truly tailor-made sound system. After much investigation, consultation and measurement, the C8-TrueFit system, with its ability to minimize architectural reflection and anomalies, was the unanimous choice as the best way to go.

As a general rule, C8-TrueFit arrays feature singularly-configured, continuously-variable and asymmetric waveguides that are “designed-to-order” based on a room’s distinctive shape. Clair Brothers TrueFit approach to venue-specific design customization is made feasible through innovative 3D CAD software – a proprietary Clair Brothers engineering technology.

While a totally custom system is a theoretically worthy ideal to strive towards, these technological advances now overcome prior constraints in required design time and real-world manufacturing. In today’s world, it’s easy to imagine a novel process like this that might involve 3D printing using plastic substrates, but at Clair Brothers wood reigns supreme as the superior horn and waveguide material. This is also the case for TrueFit technology. The ingenuity of Clair Brothers’ new installation system designs is delivered via the medium of wood. What you end up with is always a unique, venue-specific loudspeaker array that provides naturally even coverage for an entire audience.

An added bonus and special feature of the new C8-based sound system at Santander is that the majority of the system is portable, including its main PA, amp racks, cabling and motors. In this way, it’s much akin to a road system, where portability makes the unit much more flexible for any venue and its customers.

“My staff and I are big fans of the Clair Brothers C8-TrueFit system,” explains Farrar. “Compared to the one-hundred-plus shows that have brought in all different kinds of systems, I have not heard the room sound better than it does right now. We all love it.”