Safety First: How Loud Is Too Loud?

We have to understand that sometimes turning it up to 11 is just too much.

Many musicians with electric instruments often play too loud for the small churches they’re in, resulting in a mix that drives the congregation out of the sanctuary, and possibly to another, quieter church. (We know; we’ve been there, done that, both as musicians and sound mixers.)

That being said, let me assure you that I feel your pain. Most small churches have acoustics designed in the early days of pipe organ and choir.

Unfortunately, that sort of thing just doesn’t work well for modern Christian music, with the end result being unhappy musicians as well as an angry congregation. You’re stuck in the middle trying to please everyone, including the preacher.

What’s a church leader to do? First, get an SPL (Sound Pressure Level) meter so you know what’s happening. Digital and analog versions are both pretty cheap, either of which will work just fine.

You’ll want to pick the A-weighing scale and slow response as and start by measuring the Sound Pressure Level of each of the stage instruments from out in the room without the PA system turned on. This gives you an idea of how much louder the PA needs to be in order to get over the sound of the stage amplifiers.

Let’s say, for instance, that your guitar player is using a big tube amp cranked up pretty loud, and it’s hitting something like 100 dB SPL in the middle of the room. Generally speaking in order for you to actually “mix” the rest of the instruments and vocals together, the PA needs to be about 10 dB (decibels) above the SPL output of the stage.

Hmmmmm…. That means you need to build a 110-dB SPL mix just to get the vocals and keyboards above (louder than) the guitar.

But there’s a serious problem.

While an occasional 110-dB concert may only do minor hearing damage, a steady weekly diet of such levels can be devastating to the hearing of both the musicians and the congregation.

Note on the exposure chart below, how high an SPL a person can tolerate per day before hearing loss begins. That 110-dB SPL mix in your church is going to start destroying hearing within the first 30 minutes (or sooner) of your music service.

And that doesn’t even take into account the hours of practice your band has been doing at that volume level. No wonder your ears (and everyone else’s in your congregation) are ringing by the end of the service. 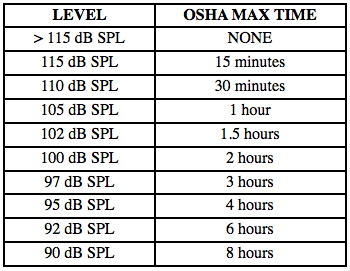 You can do a great rock mix at around 95 dB SPL (which is safe for up to 4 hours a day exposure) if you have control over the volume of the stage instruments such as electric guitar, bass and drums.

But without having the stage amps playing at a reasonable level to begin with (less than 85-dB SPL in the room) you’ll never be able to do a solid 95-dB SPL mix in the room.

It’s also worth mentioning that the above chart is based upon the US Occupational Safety and Health Administration (OSHA) exposure limits which, while law and the standard I’ve referenced when referring to finite levels, is only one safety standard commonly followed.

Read More
The Mighty HPF: Getting Up To Speed On This Absolutely Essential Mixing Tool 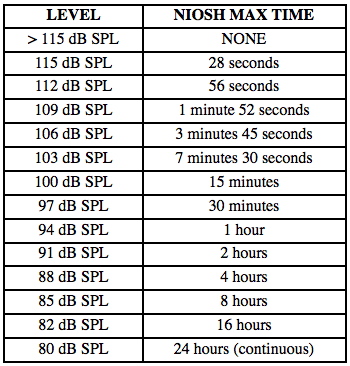 The chart to the left is produced by the US National Institute for Occupational Safety and Health (NIOSH) uses a more protective exchange rate which results in shorter allowable exposures at high SPL’s levels than the OSHA regulation.

While this chart isn’t the one referred to in the article, it’s worth realizing that the OSHA regulations aren’t the only ones out there, nor are they the regulations recommended by a majority of Audiological Institutes.

While questions regarding the calculation of exposure time are prime subjects for another article, more information can always be found on the websites of OSHA, NIOSH, and the House Ear Institute.

In the end, when dealing with loud volumes and competing standards, common sense, good judgment, and strict control of a master fader are your best weapon. Basically, the safe bet is that if it seems too loud to a seasoned professional, it is too loud. After all, is your hearing really worth that extra 3dB?

Mike Sokol does sound system design and training for JMS Productions, his consulting company in Western Maryland. Visit www.livesoundadvice.com for his educational articles and videos, and email him at [email protected] with comments and suggestions.
All Posts
PrevPreviousLate-Night London Reawakened By Sound Services & Funktion-One At E1 Club
NextHelping Clients Make The Most Of Studio Time Whether Mixing Or RecordingNext
Study Hall Top Stories
Explore All Study Hall