The Life Center at East Valley Church, located in Orangevale, CA just outside Sacramento, hosts two services each Sunday, serving a Christian congregation of roughly 1,000 members. Many of the diverse weekly events were hosted in a temporary building on the church grounds that ended up flooding. Rather than shrinking into despair, the congregation rallied and created a new ‘Life Center’ — which includes an A/V system built around the Powersoft X8 amplifier.

As both a member of the church, and chief executive officer of Noverus Innovations, Stephen Monk was the logical choice to spearhead the project.

“We were involved in pre-planning before anything was designed for the building,” he explains. “They had architecture plans of what they were going to build, but no concept of what the A/V was going to look like. We helped with the 3D renderings and worked alongside multiple vendors to choose the right system for the facility.”

“Audio was probably the most important consideration in this installation, because the worship team really depends on great audio,” he continues. “It was a natural choice for us to look at Powersoft because of the sheer capabilities of what we were getting for the money — in addition to the great audio quality the company is known for.”

After comparing Powersoft’s amplifiers with competitors’ offerings, Monk realized that he would have had to use 3 or 4 competitors’ amplifiers — any many more rack space units — versus a single X8 amplifier from Powersoft. More importantly, the X8 gave him full Dante integration, for audio networking.

Now that the system is fully installed, Monk says that despite all the features that came with the X8, the most important attribute of the new system is the audio quality.

“There were many audio issues in the space we had before,” he explains. “Depending on where you sat in the sanctuary, the audio quality was never consistently good and intelligibility was always a concern. There were always complaints: either it was too loud, or too quiet, or it doesn’t sound right over here.” Being able to run the worship team’s content through a clear system was of critical importance, whether a sermon or a 16 piece musical ensemble. “We needed a system that everybody could enjoy, and one that could support everything from our pastor’s sermon to a multi-piece touring band. It was important to be able to deliver clarity across the entire frequency range, in multiple scenarios.”

In keeping with the goals of delivering a ‘multi-generation’ solution for the Life Center that would continue to serve the needs of the congregation many years into the future, Noverus Innovations decided to integrate a Dante compliant solution that would make routing and user controls much more efficient — an important consideration in light of the fact that the A/V staff is all volunteer and don’t necessarily have the time or capacity to manage cable runs, input assignments, EQ settings and other items that can now be automated using Powersoft’s Armonia software. 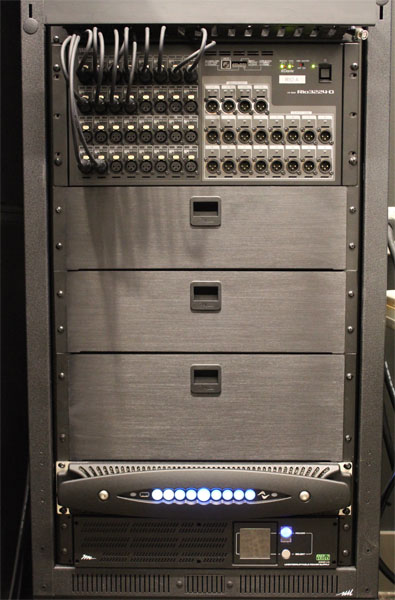 
“We knew we wanted the X series because we decided to put in a full Dante-based network for the audio,” Monk explains. “We wanted to be able to drive digital all the way up to the speaker, meaning we wouldn’t ever have to go to an outboard processor and send everything out that way. Once we looked at the specifications of the X8, it emerged as the perfect solution for a long-term investment.”

Having a Dante based environment helps the church facilitate multi-track recording, while simplifying routing and reducing use of copper cabling. “We are now able to send full digital snakes up to the stage and not really worry about end points. This gives us tremendous flexibility on stage design and expandability — we can do so many more things we could never do with analog — without spending a lot more money.”

“We can change the inputs without having to move anything physically,” Monk notes. “Also we have different profiles set up in our Armonia software. For example, if we want something that is more of a ‘concert feel’ we may select a DSP setting that has a slightly different bass forward profile, versus a Sunday morning sermon that may center on a midrange centric frequency response. Our staff is able to manage through these changes seamlessly and it is all done without having to modify local EQ settings in the amplifier or the console.”

Perhaps the best attribute of Armonia is that it enables future upgrades via firmware updates, anytime there is a software update. “This was a key component in our future expansion plans,” says Monk, “because as Powersoft introduces new features, we can easily download and integrate them.”

The PA is a left/right system, with (4) dual 15” EV subwoofers hung in the center, front of stage. To the right and left of that, there are (2) four speaker box line arrays, for a total of (8) loudspeakers. Beside each of these there are left and right side fills, which serve to fill in any gaps not covered by the primary speaker arrays. With four center channels utilized by the center subwoofers, two line arrays and two side fills, the system comprises (8) channels overall, perfectly suiting it to the Powersoft X8.

The amplifier is housed in a small amp room — which has many open rack spaces now that the X8 is in place. “The X8 is quiet and efficient, and pretty to look at,” says Monk. “More importantly, if we didn’t acquire the X8, we would have been looking at least (8) rack spaces of power. And if we had stage monitors [The Life Center at East Valley Church relies on a Sennheiser G3 wireless system for in ear monitoring], we would have been looking at (10) different amps and much more heat dispersion and power consumption.” The church is able to run the system off of a single 30-amp circuit.

Members of the congregation were able to discern a very clear difference in the audio quality compared to before, according to Monk: “Our first night of using the system with people in the building was during a worship service the entire night was dedicated to music. We were able to drive the system pretty hard, and afterwards we had many people come and tell us how amazing the system sounded.”