Building quietly and moving with unstoppable force downfield just like the University of Alabama’s Crimson Tide, audio for Bryant-Denny Stadium found new strength this year just prior to the kickoff of the NCAA college football season.

Now capable of seating 101,821 fans, the venerable stadium has undergone a continuing series of renovations since 1998 that concluded in 2010 with an expansion of seating above the south end zone. This latest renewal effort effectively closed the open-air bowl on all sides, and brought about the demise of an aging point-source loudspeaker system.

Designed by Austin, TX-based BAi, LLC and implemented by Baker Audio of Norcross, GA, the new sonic blueprint chosen to succeed the old spans large and wide within a distributed scheme based around WideLine-10 and WideLine-8 loudspeakers from QSC Audio.

Having evolved over the course of the last three years, the system is at once powerful, overtly large in its reach, and straightforward in the purest sense. Its debut this year brought new voicings to Bryant-Denny optimized during a round of tuning performed in late August that improved coverage, speech intelligibility, and full-range musical reinforcement in all seats.

“We only had three months to design the system before it went out to bid,” recalls BAi principal and audio designer John R. Miller. “The project was built in distinct stages. During the first phase, we addressed the north, east, and west grandstands. When we got to the south end zone expansion, a scoreboard and the old point source system were removed.”

A Better Experience
Every dog may indeed have its day, but even in its prime, the previous point-source rig disappointed.

One of the most common criticisms leveled against it centered around the fluctuations experienced in sound quality that occurred based upon the vagaries of air temperature, humidity, and wind direction. Management wanted to create a better fan experience that included uniform coverage, and to this end BAi took relish in exorcising the demons of the past with a distributed plan. 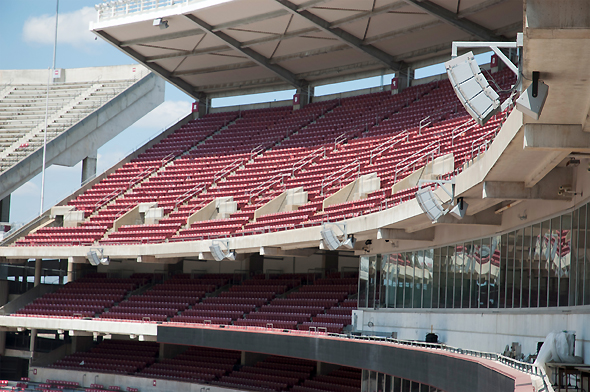 The clusters made up of three WideLine-10s that fire downward to cover the main seats in the lower part of the bowl, joined by JBL AM Series down fills. (Credit: Patrick Hern)

Despite leaving a very compact footprint for loudspeakers of their type, the WideLine-8s and 10s are the big guns of the system. Deployed at a rate of three-per-cluster, the WideLine-10s point down into the main seats in the lower part of the bowl.

Conversely, the WideLine-8s take up residence as four-box clusters hoisted high atop a series of flag poles found on the north and south ends of the stadium.

Custom rigging was devised to insure the ultra-secure safekeeping of these airborne pole-sitters, just as it was for the WideLine-10s below. The presence of subwoofers was consciously avoided to ward off the threat of building-up an unmanageable low-end capable of muddying-up the huge space – the WideLine-10s run down to 60 Hz, providing plenty of bottom end.