Its complement of RedNet systems now includes three RedNet 5 Pro Tools HD bridges; four RedNet 2 16-Channel A-D/D-A interfaces; and one RedNet 1 eight-channel A-D/D-A interface. The RedNet units were purchased through Wind Over the Earth, of Longmont, Colorado. Along with a refresh of all of the facility’s digital-audio infrastructure, the new RedNet network has given a host of new capabilities and efficiencies to the studio and its clients.

“We reached a point where we just had to move forward,” recalls Justin Davis, RMR’s senior audio engineer, who came aboard just as the facility was moving from its analog roots to DAW-based production and who did the new network’s system integration. He cites longstanding issues such as aging computers, older software versions, and pernicious ground-loop problems stemming from uneven power quality between the facility’s two buildings. 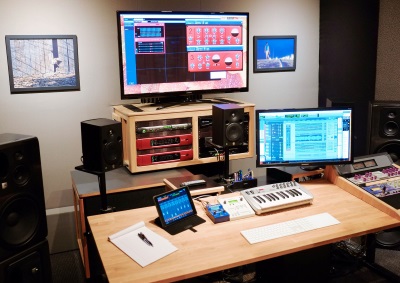 “Plus, all three studios were essentially isolated from each other, in terms of connectivity,” he adds. “If we had a large session that needed to use iso booths from different studios, we’d have to run [copper] snakes down the hallways to connect them. It was time to move forward.”

Over the course of the last year, taking one studio at a time, RMR was able to implement a dedicated LAN onto which the assembled RedNet units act as the connection points between studios, replacing older, outdated equipment and in the process improving RMR’s workflows.

“The RedNet systems made a huge difference immediately,” says Davis. “We are able to get preamps from one studio to another simply by connecting to the network. There are no more ground-loop issues at all, no wires in the hall, just RedNet and a few [internet] switches. Everything is now audio-over-IP.”

That, he says, has been a substantial leap forward for both post-production work, allowing interchange between Pro Tools systems within the facility (“with Dante and RedNet, we can move audio from anywhere to anywhere,” he says) and for music production, because RMR can now make full use of its physical plant, connecting studios, control rooms and a range of isolation spaces without concern for signal loss or degradation.

“We can use any room in the building, which gives us a lot more acoustical options,” he explains. Davis notes that the switch to RedNet has also brought an improvement in the sonic quality of any input source to its Pro Tools systems.

“Whether it’s a mic input or any of the sources we use for advertising or post-production, like ISDN, Skype, or Source Connect, RedNet just sounds better, and it’s also improved the performance of signals, with better clocking and reduced jitter and other anomalies,” he says. “RedNet was the handle we used to pull ourselves into the future.”