Veteran audio professional Mark Frink provides perspective and an overview of a recent entry in the passive direct box field, the SC800 (Part 1 of 3)

Ten years ago, in the process of putting seven active direct boxes (DIs) – including the original Radial JDV – to a critical measurement and listening test, I discovered what has gone on to become an industry standard, Radial’s JDI. passive DI.

You know, the green one with a genuine Jensen transformer inside.

Over the years, Jensen transformers have established themselves as a reference benchmark.

Many an old-timer earned his DI badge building a JT-DB-E into a bud box to make a homemade direct box: the way they were all made before the 1980s.

Not surprisingly, all these excellent passive DIs exhibit similar specs and sound, leaving most comparisons to design, features and packaging.

At 2 inches high by 3.5 inches wide. it’s similar in shape to many familiar DIs.

Its 4-inch length is shorter than most others by about an inch, and there are two strips of rubber on the bottom to act as isolation feet. I like that there’s enough room to tape a business card on one side with clear packing tape to ID it when lost or misplaced. The SC800 looks sharp and professional. 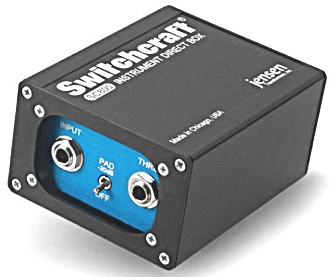 Front panel view of the SC800. (Click to enlarge)

By eliminating the need to use a microphone, they also remove troubles of microphone choice and placement, as well as leakage into the mic from nearby sound sources.

Mark Frink is a touring sound engineer who has mixed monitors for numerous top artists.
All Posts
Top Stories
Explore All Reviews