Putting a new column loudspeaker/subwoofer combo through its paces. (Includes videos on page 2.)

Getting Right To It
Usually with product evaluations, I try things out on my test bench first and become familiar with operation before any field applications, but this time was different. The day I received the iP2000 was also the day of a party in my neighborhood to celebrate a child’s birthday and some other milestones.

What had been conceived as a gathering for an expected 10 or so guests had quickly grown to a full-fledged event attracting several dozen attendees joined by a bounce house, snow cone machine and a feast that could feed a small village.

Of course every party needs music so I decided to give the iP2000 a “trial by fire” in covering what had grown to be a quite large and noisy area—and the system didn’t disappoint.

Turbosound provided a single iP2000 stack consisting of two columns that attach to the sub. First I unboxed the top modules and was surprised at how small and light in weight they are. Each module has a multi-pin connector that mates with the unit below it, and this connector is surrounded by four large pins that stick out a few inches. The pins hold each module in place, and the rear pins are slightly wider so there’s no mistaking which way to fit the modules together.

The sub also has a receiver unit with multi-pin, so the top modules simply slide into place on the sub. It’s a slick, simple and intuitive build/interconnect system. And remember, the multi-pin handles all electrical connections so no cables are required. 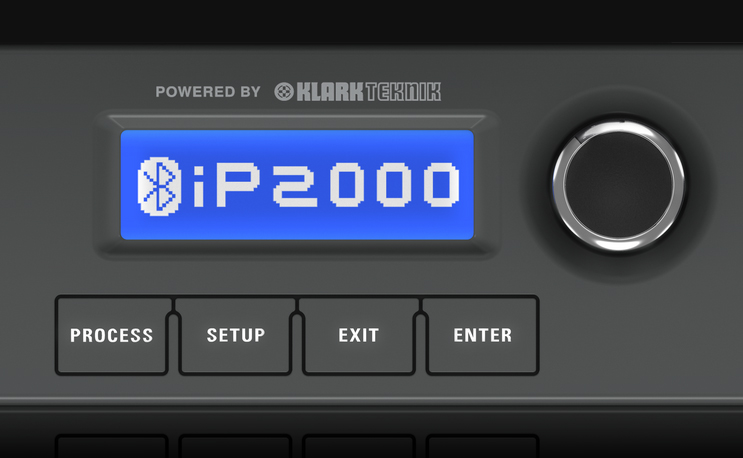 The LCD screen on the sub that displays parameter settings and a single encoder knob that can be pressed as well as rotated to facilitate changes.

Next, I was quite pleased to find that the control panel is top-mounted on the sub and not on the back. I could just look down to change parameters and not have to get on my hands and knees and bend over to see the screen to make adjustments. It also means that changes are easier to make with the unit located next to a wall.

I placed the sub in proximity of an AC outlet and then attached the top modules. The menu was intuitive and there wasn’t even need to consult the manual. I plugged an iPad into the A and B inputs and quickly had some music playing. Sound quality was really quite good out of the box, and the sub had a lot of thump for its size.

Connectivity & Coverage
Eager to check out the app, I downloaded it on my iPhone. The phone quickly discovered the loudspeakers via Bluetooth, and then in using it, I found that the app provides a lot of control. I could adjust the volume of both A and B channels, the volume of a third channel for Bluetooth streaming audio, the master volume, sub volume, and EQ, as well as switch between the four preset EQ modes. Walking to the far corner of the coverage area, I found solid connectivity at more than 100 feet away.

During the event, numerous guests commented on how great the system sounds, with some also pointing out how nice it looks. The 120-degree horizontal dispersion is solid, even off to the sides, just out of the pattern. I had no trouble filling the entire outdoor space with a single stack. At 81 inches tall, the tweeter and some of the mid-range cones are above the heads of a standing crowd, so when folks would stand between the loudspeaker and myself, it was still clear rather than muffled.

After the event I checked out the Bluetooth streaming capabilities. The iP2000 allows streaming audio to one or two loudspeaker stacks, with selection of which stack is the master. The app also automatically detects stereo mode and adapts the GUI accordingly. I also evaluated the app and connectivity on an android phone and had the same success. Fast, solid, and no problems at all.

Satisfied that the Bluetooth worked as advertised, I plugged a microphone into the system to listen to a live voice through the loudspeaker. The iP2000 has a speech mode setting so I tried it first. It’s a little thin-sounding to my ear but can be warmed up with the EQ. And both the live and music modes sound great with a voice.

The Bottom Line
As previously noted, I’m a big fan of column-format loudspeakers for a variety of reasons. One is a preference for the look of the slim profile as opposed to a more clunky loudspeaker on a tripod stand. I also like a wider horizontal dispersion than the typical 60 to 90 degrees. My clients like how columns can be placed in tight spaces and still perform to expectations while not blocking sightlines.

Anyone in the market for a column/sub combo should definitely put the iP2000 on the list. It delivers high-quality sound in a compact footprint that’s easy to transport and flexible in placement. It’s a perfect system for DJs, and also makes for a more-than-suitable rental PA as well as being cable of meeting myriad applications in schools and churches where inexperienced techs and volunteers will have no problem getting up, running and optimized without a glitch.