The pro's and con's of Blue Microphones handheld microphones for live performance.

I was quite happy to have the chance to be the first road tester for the Encore 100 and Encore 200 microphones from Blue Microphones.

Blue is better known for their recording mics and special application mics and now they have entered into the realm of mics for live use with the Encore series.

I received one Encore 100 and two of the Encore 200 for this road test. Both are dynamic vocal mics with a cardioid pattern. The Encore 200 needs phantom power while the 100 does not.

Because of the pricing similar to the Shure SM58 and the fact that I normally use the SM58 for vocals, I will be making comparisons relative to the SM58 for the most part in this review.

I have been running sound for a contemporary Christian rock band for the last 6 years or so and that is who I tested these mics with. It’s a fairly typical 4 piece rock band (drums, electric guitar, bass, acoustic, and 3 vocals).

I typically run around 97-99 dBA at front of house (about 50 feet from stage on average) with peaks from 102-105 dBA. All four band members are on IEMs so I didn’t have to worry about interactions with stage monitors for this test.

Accessories
First off, while this may not matter to most people, the pouches that these mics come in are a bit nicer than the standard Shure pouch. It’s like a thick tweed material with a soft inside liner.

It seems like it may provide a little more protection than the pouches most manufacturers provide with their mics. It’s also nice that the pouch has the microphone model on it so you know what’s inside the pouch without having to open it to check.

The pouch has a flap that folds open at the end of it rather than a zipper down the long side of it. I carry all my mics in a mic case so the pouch doesn’t really matter to me but I thought I would mention it anyway. 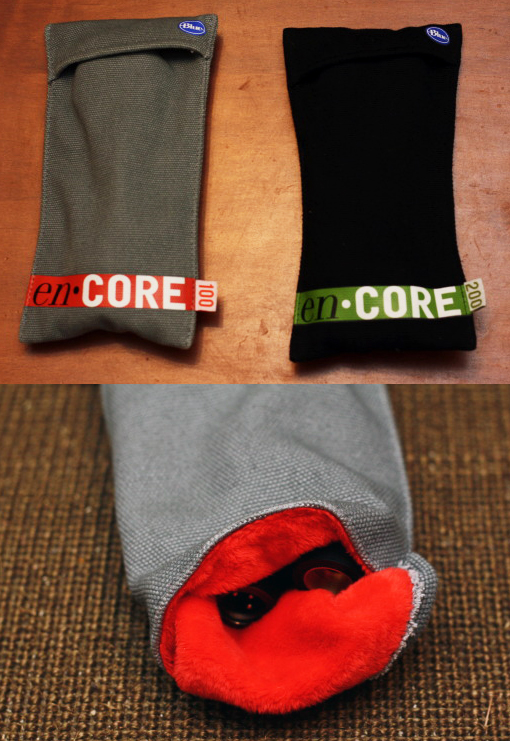 The Encore pouches (above) and their lining.

Another thing that may not matter to everyone but is worth a mention is the mic clips that come with these. They are good sturdy clips that are a little more flexible than the SM58 clips.

They are a little more like a wireless mic clip as far as flexibility. I liked the clips myself. They are a little easier to get the mic in and out of than the SM58 clip but still give a good solid grip on the mic.

Appearance
The first thing I noticed when I pulled the mics out of the bags for the first time was the very shiny, reflective grill on both mics and the copper color of the grill on the Encore 200.

I certainly wouldn’t have chosen such a reflective finish on the grills or the copper color of the Encore 200 grill. My first thought was “will the singers even want to use these mics?” I don’t think they are ugly or anything like that but they just stand out a little too much for my taste.

Don’t forget to check out the rest of the discussion on the Encore 100 & 200 in the Sound Reinforcement forum!