Checking out key components of the V-Mixing System

A compressor and gate is provided on all mixing channels, with 6 stereo multi-effects processors and 12 graphic EQs available for patching.

For this Road Test, Roland also provided two of the three available models of snake boxes, as well as some CAT cabling on reels. (More about these facets later.)

The first thing I noticed is how lightweight and compact the console is, even in the flight case that it shipped with. It’s very easy for one person to manage the console in the case, as well as pick up or move the console by itself. 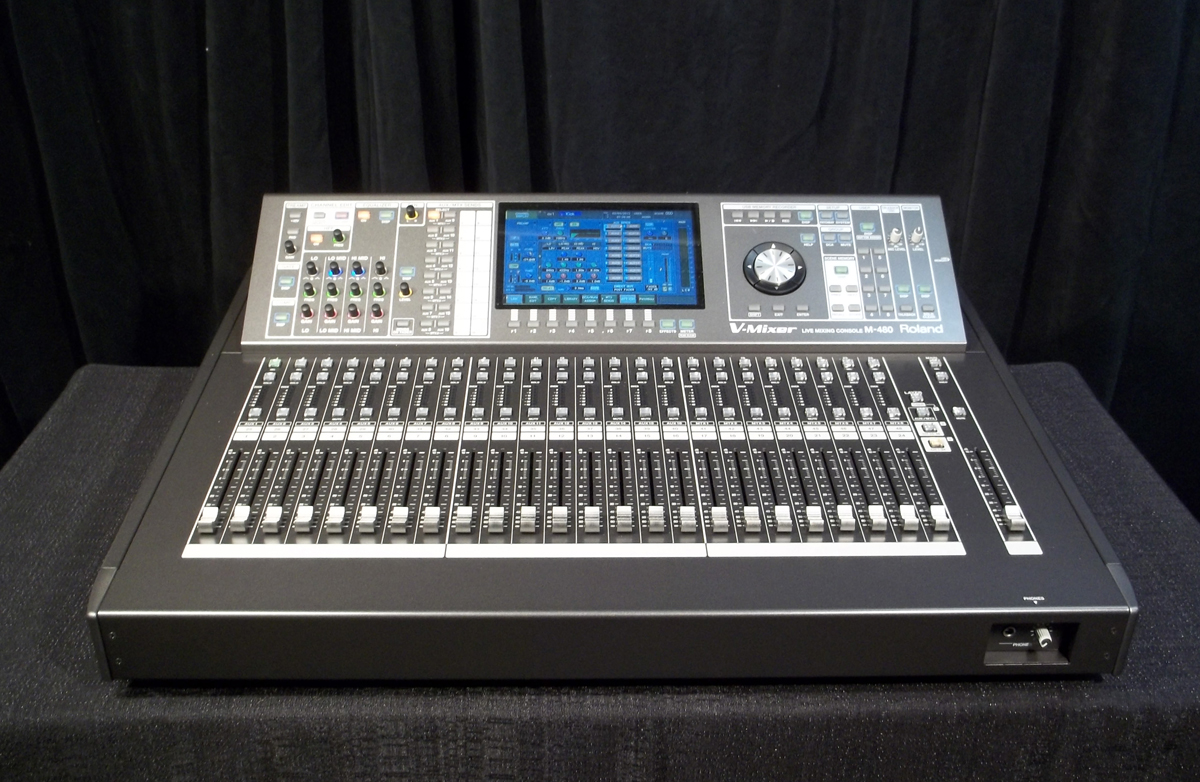 Setting up the console without a snake connected is easy because the rear panel offers 8 patchable inputs and 8 patchable outputs. There is also a stereo pair of RCA input jacks and an XLR input for talkback microphone.

Rounding out the connectors on the rear are an optical and coaxial digital output, USB, MIDI and RS232 jacks, and of course the RJ45 etherCON REAC digital snake ports. A recessed headphone jack and volume control are provided on the front. 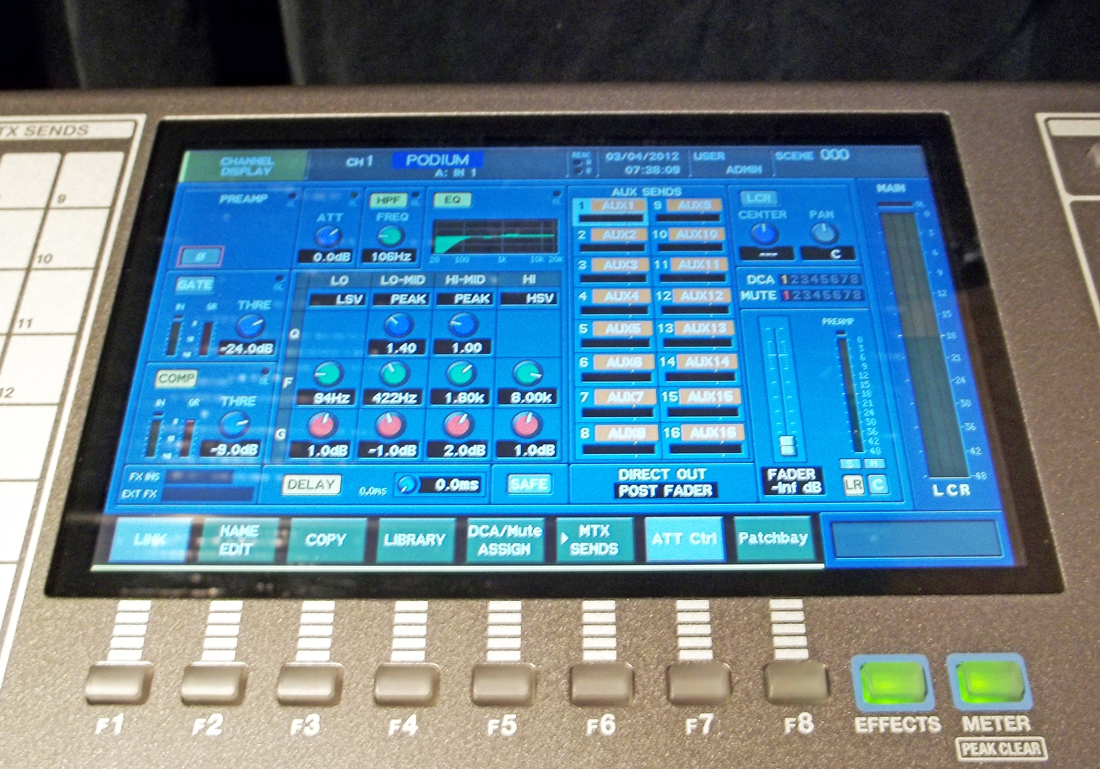 The large touchscreen is easy to view and tracks well with adjustments. (click to enlarge)


Getting around on the console is very intuitive, and I found that I didn’t even crack open the manual until I tried to map layers and assign effects. Speaking of the manual, it was very easy to use. The sections are logically laid out, and the text is clear and concise on how to accomplish routing, patching, and tweaking. (I wish more product manuals were as clear!)

During testing, I plugged in a mic and then went to plug in my computer to playback some tracks while I familiarized myself with the controls. That’s when I discovered that the M-480 does not include a digital input on the rear.

What I thought were SPDIF connectors were actually stereo RCA analog line inputs – certainly not a deal breaker for me, but some audio folks want/need a digital input on their console. And, note that digital I/O can be found in the S-4000S snake configuration with AES/EBU I/O. 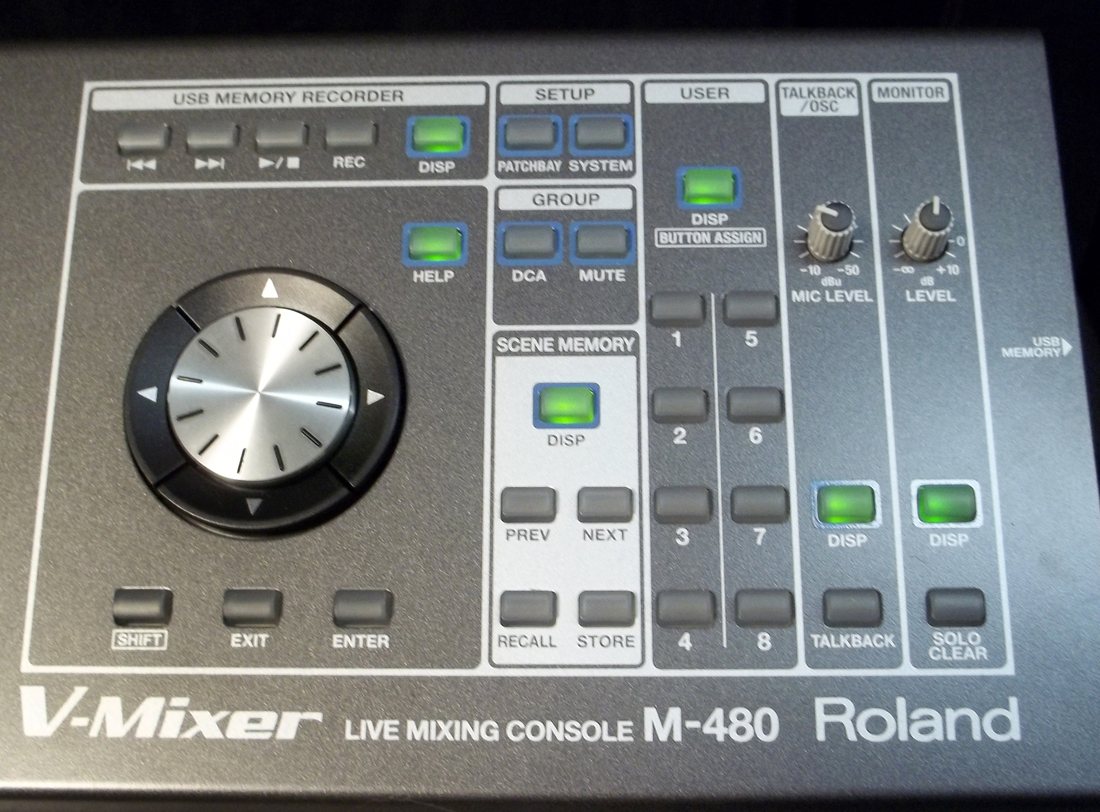 The shuttle wheel and enter buttons, with a clean layout and adjacent to the screen. (click to enlarge)

After an hour or so, I had the hang of the console, and let an audio buddy who had stopped by my shop check it out. He also liked the layout of the control surface,  and the large screen made it easy to see what was going on as he made adjustments.

I guess I’m getting spoiled by my iPad, iPhone, and almost every other newer gadget, because I kept thinking the M-480 sported a touchscreen.

However, while that would be nice and perhaps a bit faster in terms of making adjustments, the console’s jog/shuttle wheel and enter buttons were plenty fast for the type of gigs that I usually do. Once I got the hang of the wheel, I had no trouble easily accessing the various parameters and making adjustments quickly.

Craig has worked in a wide range of roles in professional audio for more than 30 years in a dynamic career that encompasses touring, theater, live televised broadcast events and even concerts at the White House. Currently he owns and operates Tech Works, a regional production company that focuses on corporate events based in Reno.
All Posts
Reviews Top Stories
Explore All Reviews