Cables present plenty of problems in audio systems, and it’s something Dave Rat and the gang at Rat Sound have been addressing with a growing line of SoundTools products.

The sniffer/senders are cable testers, but unlike many devices of their type, they can be used to check cables/snake channels when they’re in place at a show or installed at a venue and the two ends are not near each other.

All have two components. The XLR Sniffer/Sender, for example, includes a small “sender” unit with an XLR female plug on one end and a recessed switch on the other. Unscrewing the switch end opens up the battery compartment, which houses a small A23 battery.

The even smaller “sniffer” unit includes an XLR male plug and three recessed 2-color LED lights labeled a, b and c on the other.

The 1/4” Sniffer/Sender is very similar in size and function, and as the name states, both ends accommodate 1/4-inch tip-ring-sleeve (TRS) terminated cables, with the sniffer end including the same LED capacity as the XLR unit. The NL-4 Sniffer/Sender has 4-conductor Speakon jacks (both ends), with the sniffer end outfitted with four recessed 2-color LEDs that can indicate a wide range of problems. 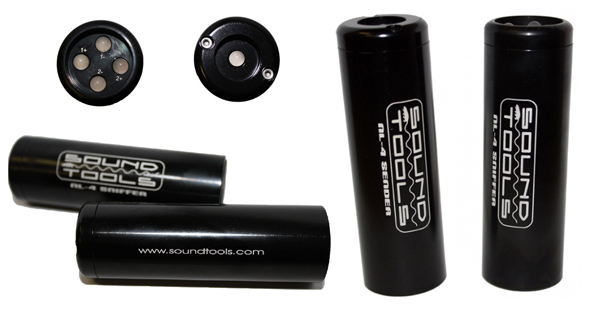 The NL-4; all of the SoundTools “Sniffer/Senders” take the same basic form. (click to enlarge)

Meanwhile, the Mic Swapper is a 2-input/2-output unit with swappable outputs. The business end is a cylinder made of metal with a rugged, metallic cap switch on the end. Four CBI brand 22 AWG microphone cables exit the rear of the housing from a beefy cable clamp. The cables are about 54 inches long and terminate into rugged Amphenol XLR ends.

Testing & Tracking
A pile of cables in my shop, just back from a gig, provided a great opportunity to check out these tools. First I tested a single XLR cable, and the sniffer showed three green lights meaning the cable was good.

Next up was a small stage snake, which is something a sender and sniffer style unit is really made for. The first channel of the snake was good, but the second channel of the snake showed only two green lights. Not even 10 minutes on the job, and the unit had found an incorrectly wired snake channel.

Two green lights on the XLR Sniffer/Sender means that pins 2 and 3 are swapped or shorted. Since I’ve been using that snake for more than 15 years with no problems, I guessed that they were swapped. A check with a meter verified that my hunch was correct.