When a company has a great vocal microphone, the first question is “where’s the wireless version?” After Earthworks released the SR40V hypercardioid vocal microphone a year or so ago, that very question soon arose – both from users and wireless manufacturers.

The result is the WL40V vocal head for handheld wireless transmitters. Integral to completing the project was a significant technological challenge: how to retain the microphone’s frequency range, transient response, and other audio characteristics when a wireless link is substituted for copper between the transducer and mixer preamp.

A wireless transmission begins with the audio signal from the transducer, processes it with either analog or digital technology, modulates it onto an RF carrier wave, which is then demodulated and converted back to analog audio (or sometimes remains in the digital domain) before the signal exits the receiver bound for the next audio device.

To optimize the WL40V head’s response through a wireless channel, Earthworks concentrated on presenting the transmitter circuitry with a well-controlled, very flat audio signal across the full audible spectrum, and properly matching the amplitude of the microphone output to the input parameters of the transmitter. The consistency of the frequency response throughout the mic’s polar pattern was also a critical element.

By presenting the best possible signal to the wireless link, the only coloration introduced is a result of any audio anomalies within the wireless itself. And when coupled with the highest quality, most uncolored wireless systems, the signal that reaches the mixer retains the transparent sonic character of the wired version – as borne out by listening tests.

Wired Version
Founded in the late 1980s by David Blackmer (also the founder of dbx), Earthworks was first know known for its measurement microphones, used for testing the response of audio systems and in live settings for tuning concert arrays. 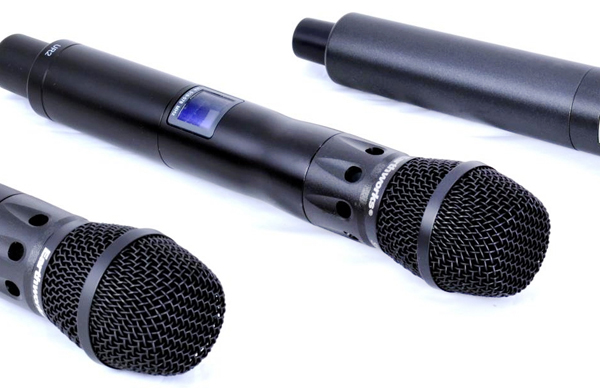 The company, now under the direction of David’s son Daniel, began developing performance mics over the past decade, with the SR40V being the first vocal microphone, released in later 2011 after several years in the development and field-testing phase. The wireless version started development soon after, and was released this past fall.

Because the wireless head is basically the same microphone transducer and electronics, describing the characteristics of the wired version is a good starting place. The SRV40V uses a relatively small (9.7 mm) diaphragm, because of its desirable response characteristics which include higher dynamic range, wider frequency response (especially in the high frequencies), and high SPL handling.

To achieve a highly accurate impulse response with a minimum of ringing and resonances, Earthwork engineers optimized the tension on the diaphragm, achieving a noise floor of 22 dB A-weighted while producing an impulse that goes from zero to full signal and back to resting state in a bit over 100 microseconds – and with most of that action happening virtually instantaneously. What that translates to is an accurate reproduction of the finest details of the source audio.

Gary is a writer who has worked in pro audio for more than 25 years, holding marketing and management positions with several leading manufacturers.
All Posts
Top Stories
Explore All Reviews