How does it stack up to it's noted heritage on the bench and in the field?

Countryman is well known for the Type 85 DI box, and I’ve seen more than a few riders where a DI is simply referred to as a “Countryman.”

I have several Type 85s in my inventory, and have been looking forward to getting the newer Type 10S to the bench for a listen.

An active box, it’s built as ruggedly as the Type 85, with a solid aluminum casing that can stand up to anything a tour or crew can dish out. To be expected, it’s slightly larger than the single-channel Type 10, measuring 2 x 4 x 6.2 inches and weighing 31.2 ounces.

And like it’s single-channel sibling, the Type 10S is finished in a silver color with black lettering that’s very easy to read, even in the dim light at a gig.

The controls and jacks are recessed for protection but are still simple to access and use. One end contains the inputs, which include a gold-plated stereo 1/8-in jack, two gold plated RCA jacks, two 1/4-in input jacks, and two 1/4-in “THRU” jacks.

Also included are two input PAD switches (one for each channel) that offer three settings: 0 dB is for most sources, including guitars and keyboards as well as computers and multimedia devices; -15 dB can tame the levels of hot keyboards or other active instruments; and -30 dB allows the user to plug in the output from an amplifier, like a guitar head, and direct the amp sound into the PA or recording. 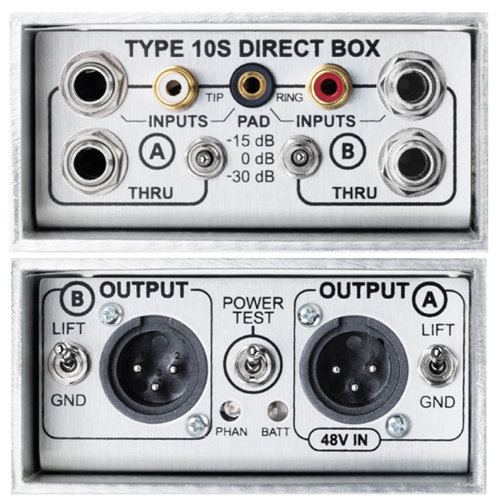 Front and back views of the Type 10S. (click to enlarge)

Caution with that last setting, however. As the manual points out, a dummy load or loudspeaker should also be connected to the amplifier, because the Type 10S will not provide the required load to the output of a tube amp.

The other end contains the outputs and test section. There are two XLR connectors, each with its own ground lift switch, along with a momentary power test switch and two LEDs.

If operating with phantom power, depressing the switch will light up a green PHAN LED. If operating on an internal battery, the BATT light will glow green if the battery has suitable juice and red if it’s low. This serves as a quick way to check if the unit is being powered correctly when used.

The unit is powered via 48-volt phantom or with a 9-volt alkaline battery. Applying phantom power to channel A will power both channels in the DI.

To use the battery, you need to insert a 1/4-in plug into channel A because there’s a switch inside the jack that turns on the battery. Countryman states a typical 9-volt alkaline should provide about 130 hours of use.

Craig has worked in a wide range of roles in professional audio for more than 30 years in a dynamic career that encompasses touring, theater, live televised broadcast events and even concerts at the White House. Currently he owns and operates Tech Works, a regional production company that focuses on corporate events based in Reno.
All Posts
Reviews Top Stories
Explore All Reviews