I’ve had a chance to check out and use the new Mackie DL1608 digital mixer for a while, and if I had to use a single word for the review it would be “cool.”

Mackie has managed to put together a small package with a lot of great features, and paired it with an Apple iPad for the control surface.

Let’s take a look at the specs. The DL1608 is a very compact mixer at only 11.5 (w) by 15.4 (d) by 3.7 (h) inches and weighing less than 8 pounds (without an iPad). The majority of the front surface of the mixer is the tray area for a user supplied iPad. The tray can fit all iPad models except iPad mini and fourth generation. (All iPad models are supported wirelessly.)

Above the tray area are 16 gain controls for the channels, and each one has its own dual color LED for signal and clipping indication. A 1/4-inch headphone jack and rotary headphone level knob complete the front surface controls.

The rear of the mixer sports 16 XLR connectors for the channel inputs, with the last four being combo connectors, accepting both 1/4-inch and XLR plugs.

Six 1/4-inch TRS jacks are located underneath the inputs and are used for the aux outputs. An RJ45 network connector, Kensington lock slot and power connector complete the connections located at the rear. 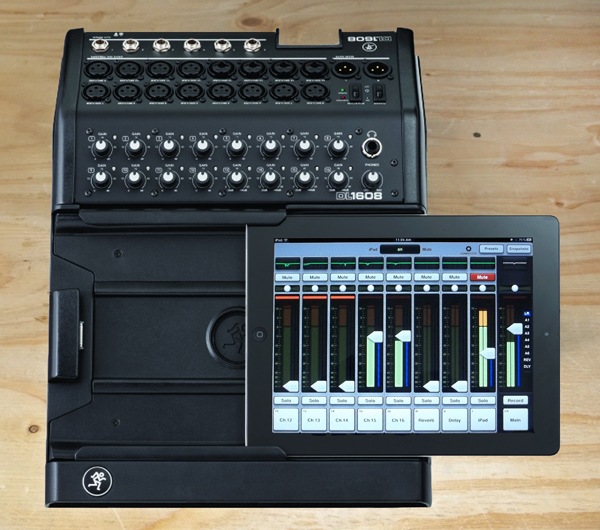 Speaking of power, Mackie has supplied a very nice universal 12-volt power supply with the unit. It’s of the “line lump” variety and will accept any voltage from 100 to 240 volts AC. A removable IEC plug connects to the “power block” (line lump), allowing an easy swap of the cable for one that will connect to local outlets anywhere in the world.

The other end of the power block connects to the mixer via a locking screw on connector so it won’t disconnect during use.

Like A Champ
Mackie has chosen to place all the mixer controls (with the exception of power, gain, headphone level, and phantom power) in the iPad.

The DL1608’s Master Fader app is available free from the iPad App Store and, at least to me, is the nicest looking and easiest to get around software for mixer control that I have seen, providing quite a bit of information to the operator at a glance.