Alto Professional recently sent me a pair of TS115A loudspeakers to check out, and they turned out to be a gig saver – but more on that in a bit. Let’s look at the specs first.

Part of the company’s TRUESONIC Series, the TS115A is a 2-way self-powered model that utilizes a 15-in woofer for the lows and a 1-in neodymium compression driver for the highs.

These boxes are attractive, with a nice steel grill that covers the entire front of the box. I prefer full grills because they better protect the box, and also they look a bit more polished and “corporate” to me.

The cabinet has a built-in handle pocket on the top, as well as large handles on each side and a pole socket on the bottom that uses a clamp for added security/stability. Six M10 flypoints are also provided – two each on the top, bottom and rear. 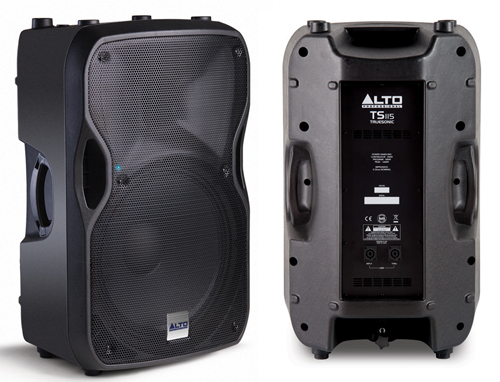 Front and rear views of the Alto Professional TS115A. (click to enlarge)

The rear also includes two input channels with Neutrik XLR-1/4-inch combo connectors. Directly above them are individual gain pots for each input. A male XLR is provided for Line output, and there are “ground” and “contour” switches on the right side of the panel, as well as signal and power LEDs. An IEC power cord socket and power switch are located at the bottom.

Trial By Fire
Normally I set up Road Test gear in my shop first to do some testing and become familiar with its operation before taking it out on a gig – but this was an exception. One might even call it trial by fire.

The TS115As had just been delivered to my home when my neighbor Matt, a part-time DJ, asked me to help him with a problem with his system.

He had a gig that night so had set up his system in his garage to test it, and quickly discovered that his powered subwoofer and satellite loudspeakers had issues. After a bit of troubleshooting accompanied by a lot of head-scratching, it became clear that the amplifier to power his full-range boxes, built into the subwoofer, was dead. 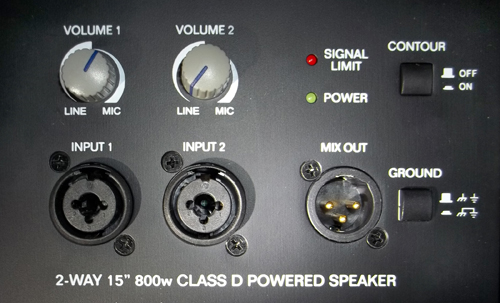 Two input channels with Neutrik XLR combo connectors, each with its own gain pot. (click to enlarge)

I offered him the use of the TS115As. Straight out of the box, one loudspeaker made the “long trip” next door, where we hooked it up to give it a listen. Right away we were both impressed with how nice it sounded and how loud it got.

Next, I engaged the contour switch to see what it did, and realized immediately that it added a “loudness” curve (a.k.a., smiley-face EQ), boosting both the bottom end and the highs. But it had ample bass with and without the contour switch engaged, so Matt decided to leave his sub at home and do the gig with just the pair of TS115As.