“What do you think I have to do to get him to send me out on the really big shows with the big concert rigs?”

In the early 1990s I was serving as a maintenance tech in a large recording studio complex when I got a call from the sound company I’d worked for in the previous decade. Was I available to mix and tech front of house for the upcoming Canada Day (July 1st in Canada, like July 4th in the U.S.) gig at the provincial legislature?

I hadn’t done live sound in a while, but it was a daytime gig, on a paid holiday, with no shop prep, so what the heck – I said yes.

On the day of the gig, I show up bright and early, greet some old colleagues, including the owner of the company whose client’s gig this was, as well as some new faces. One of the new faces I’m introduced to is someone we’ll call “The Kid,” and he would be assisting me at front of house.

So The Kid and I proceed to the FOH riser and start to set up. The whole time he’s bombarding me with questions: “Whaddya’ think of this piece of gear? Whaddya’ think of that console? Do you like to EQ the system this way or that way? Didja’ ever use one of these?” And so on.

Now, I’ve always been a big believer in teaching the up-and-coming. As long as the questions are reasonably intelligent and respectful, I try to answer to the best of my ability and hopefully impart some knowledge. (I once had a new hire, on his first day, corner me in the coffee room at the shop and demand to know “How many ‘K’ in a hundred watts?” When I tried to explain that this wasn’t a valid measurement, he became increasingly insistent: “No, I really want to know!” – the implication being that I was just blowing him off because he was a newbie and as a result was refusing to answer. The fact that he was from the UK and this all came out in a thick London East End accent made the whole ordeal feel like a Monty Python routine. To this day, I’ve never really been sure if he was winding me up or not, although he seemed totally serious at the time… But I digress).

All through setup and sound check I continue to field questions from The Kid. Eventually, we’re ready to start the event and he moves up to the stage to be part of the deck crew.

The show itself runs smoothly. The only other thing I remember about it was when the host, MuchMusic VJ Monika Deol, unimpressed with the crowd’s anemic singing of the national anthem, belted out the most stirring rendition of “Oh Canada” I’ve ever heard. (And she was standing right next to me on the FOH riser at the time.)

When the strike rolls around, The Kid comes back to FOH to help me tear down. He’s still full of questions, but I can tell he’s working up to something specific. Finally he asks me: “How well do you know ‘X’?” (“X” being the owner of the sound company.) 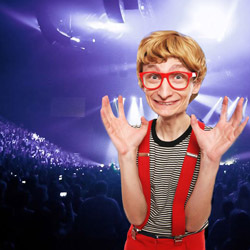 And out it comes: “What do you think I have to do to get him to send me out on the really big shows with the big concert rigs?”

“Sixteen!” is his response, to which I reply, “Well, here’s what you have to do… GET OLDER!”

Postscript: This gig eventually led to an offer to return to the company and manage its audio department, which I did for eight years, starting later that year. Meanwhile The Kid, who was also an accomplished musician, went on to some success with a few bands.

A few years later he was visiting the shop on some business and came upon me relating the above story to one of the staff. As I got to the punch line, he says, “Yeah, but here’s the best part. When I was on that gig, I lied about my age – I was only 14!”