For the inauguration of Duke University’s 10th president, RMB Audio was faced with the challenging task of providing clear, articulate speech reinforcement and accurate musical reproduction for the audience with all the equipment out of the camera shots.

As described by RMB system tech Wayne Sowder, “The inauguration took place on 160 foot wide by 400 foot deep quad in front of the Duke University Chapel with 5,000 seats and people standing. To get the consistent coverage and exceptional audio quality the University expected, we needed a wide selection of Martin Audio products that included MLA Compact, MLA Mini, DD12, DD6 and CDD-LIVE 8 speakers.

“Because of the visual restrictions, we had to go with a wide stage using six MLA Compact for the main PA stacked on risers in front of the stage at each end out of camera range with 160 feet between each stack. We also used four MLA Mini under the stage behind scrims to cover the open area in front of the stage with the first seating about 30 feet away.” 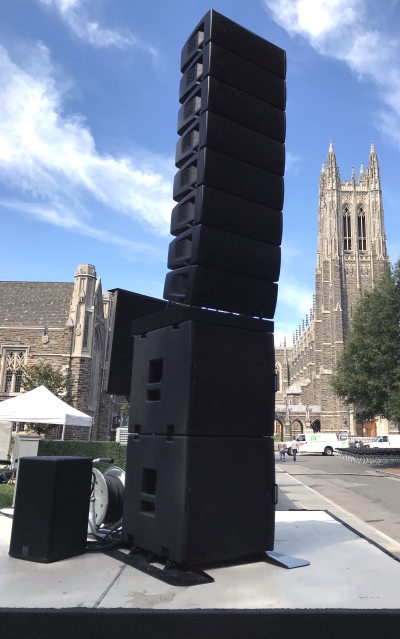 The stage consisted of three different sections with a wind symphony stage right, the speaker podium in the center, and a jazz band and 50-voice chorus stage left. Four loudspeaker stands with two Martin Audio DD6 each were used discreetly at the edge of each section on stage for side fills.

Further complicating the coverage were trees blocking the audio lines, so as Sowder reports, “we did a lot of site surveys and calculations to make sure everything worked perfectly. The main PA stacks were canted in at a 20-degree angle firing across the audience with a DD12 on each platform cutting toward the center of each speaker section to ensure smooth coverage on the front rows with all the VIPs.

“Then, halfway out from the PA, we had two delay stacks of MLA Mini with two MSX subs and eight MLA Mini boxes on top facing inwards at a 20-degree angle to shoot between trees towards the audience with a CDD8-LIVE on each stack facing out as an outfill to alert people entering the quad so they would keep quiet.”

In addition to the Martin Audio loudspeaker complement, RMB used a Midas M32R as a sub-mixer for the jazz band along with two Midas M32s for the front of house mix and a recording mix that streamed on YouTube and Facebook, as well as a separate mix for the media coverage––all networked together using VuNet.

As Sowder concludes, “This event was all about speech and it was critical that everyone heard all the words. Matt Johnson, the system tech and front of house mixer for the show, set it up so it was 0dB at the front of coverage and 0dB at the rear of coverage, the same decibel level throughout the coverage area.

“Our client was very pleased. People thought it sounded very good, which was a challenge because not all the speakers were facing forward and we had to do a lot more time alignment to make sure it was accurate because we were firing cross field. That, plus we only had two hours for sound check the day of show because we couldn’t disturb the surrounding classrooms.”

Selden Smith, manager of Technical and Media Services at Duke, adds, “The good news is that our group, and really everyone involved, has been basking in the glow of a well-received event. I’ve received many compliments and handled no complaints since then.

“As for RMB’s role in it, I appreciate that, as usual, they delivered top-notch service with high quality gear and superior applied knowledge. Ultimately, the results were exceptional—clear audio throughout the venue, with no distracting reflections off the surrounding stone walls. At one point during the ceremony, I walked far beyond the last row, almost doubling the distance from the stage, and could still discern the speechmaking clearly.

“The ceremony began and ended with the playing of the Duke Chapel Tower’s marvelous 50 bell carillon. That unique instrument, played live, requires no amplification to be heard throughout Duke’s West Campus, but RMB Audio made sure to carefully capture its tones for our webcast and archival video.”