One of the highlights of the UK summer season is the Henley Festival––a traditional ‘black tie’ boutique event for Martin Audio partner, RG Jones Sound Engineering, spread over five days.

The company has serviced the event for 36 years, and in recent times they have fine-tuned their coverage of the main stages with Martin Audio MLA components, including the tricky Floating Stage.

As festival technical manager and head of sound, Jim Lambert, says, “The Floating Stage has always been a challenge in that the front to back of the arena is only approximately 98 feet, but it is extremely wide, and with the introduction of general admission tickets outside the arena we are being asked to cover a width of something like 330 feet. The MLA Compacts more than rise to this challenge and yet also enable us to keep to the fairly strict off-site noise limits set by the council.” 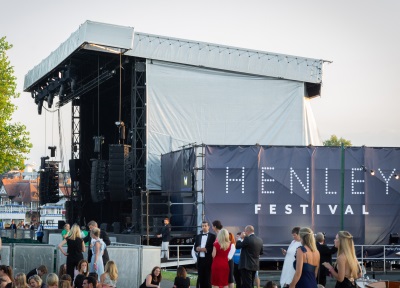 It again provided the perfect setting for main stage headliners Rita Ora, Chic (featuring Nile Rodgers), Grace Jones, Curtis Stigers and ENO, particularly since the highly experienced sound team of Steve Carr and Mark Edwards, both of whom have an advanced knowledge of MLA, were on hand to supervise the main stage.

Having refined the system last year, the service company further fine-tuned the PA this year, adding the powerful Martin Audio DD12’s as arena delays in the grandstand to replace the previously used DD6’s. Production also used MLA Mini for infill, and decided to retain the same curved MLX sub bass arrangement that they had introduced in 2017. According to Jim Lambert, “This produced a much smoother response in the far reaches of the main stage arena.”

“It also enabled us to achieve more even coverage of the tricky grandstand whose roof partially shadows the audience from the main stage arrays.,” explains head of department, Jack Bowcher.

Set opposite a residential area in the picturesque town of Henley-on-Thames, the arena levels need to be held at a respectable level. “This helps us achieve the offsite limit with a large amount of headroom,” continues Lambert. “Having said that, with a bit of careful tuning of the system we were still quite easily able to achieve front of house levels that you would expect indoors”. 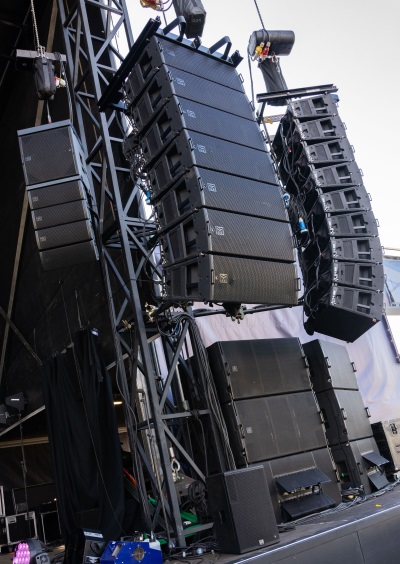 In addition to the Floating Stage, where MLA Compact was not only used for main PA hangs but also outfills, along with the MLA Minis for infills, MLA Minis were also used in the Bedouin Tent and Jazz Garden — two of the other three stages equipped by RG Jones – the only onsite sound contractor for the festival.

MLA Compact certainly proved a popular choice with visiting sound engineers, many of whom were experiencing the system for the first time. According to Jack Bowcher, all returned a positive response, and all reported an enjoyable time using the system. “Some were initially skeptical about achieving the levels they normally mixed at but once they heard what the system was capable of, they were all extremely surprised and happy,” he says.

In conclusion, both Lambert and Bowcher acknowledge that with an exceptionally tight production schedule, the ability to fly a system quickly and efficiently which will achieve exactly what is required out of the box is vital. “MLA gives us the time we need to focus on other things as they crop up without needing to spend huge amounts of time tuning the PA,” they say.

“It is always a pleasure working with RG Jones,” summarizes Jim Lambert. “The sound team onsite consistently goes the extra mile and is considered a large part of the Festival family.”

A spokesperson for the festival adds, “The quality of what RG Jones brings to Henley both in terms of kit, but most importantly people, is right up there.”

Touring production manager for Rita Ora, Daria Dee adds, “I’ve been working with RG Jones for many years now and it’s always a relief to see their name on the sheet. The people behind this company are very passionate about what they do––they are a family run independent business and it really distinguishes them. I’ve been to Henley Festival as a guest and it’s a truly unique event.Working on it this year was equally fun and refreshing; the festival team are as wonderful as they are professional, and our crew were well looked after. Rita had the crowd jumping and the sound system sounded incredible––a floating fairy-tale on the water.”