Taking a closer look at a pocket-size 2-channel, 24-bit/96-kHz audio recording interface for mobile devices such as iPhone and iPad.

Many years ago, we joked about the day coming when we would be able to shove a complete multitrack studio into our pocket. I still don’t have one of those, but I now see how it could happen.

The recent release of d:vice MMA-A from DPA Microphones offers a user-friendly interface for folks who already do everything else on their phones. Even though it doesn’t quite give me the visionary dream machine with pristine, studio-grade audio across a multitude of tracks, it does provide two, and that’s a nice start.

I looked forward to checking out DPA’s latest gadget with high expectations. The company is a serious player in the professional world, where accuracy matters. Knowing that, I set the bar high and went in critically.

d:vice is essentially a 2-channel, 24-bit/96-kHz interface for mobile devices such as iPhone and iPad. It’s about the size of a York Peppermint Patty and supplies three connections; two for microphones and one Micro USB-B for everything else. Almost too simple.

The unit is compatible with all DPA mics utilizing a MicroDot connector, including d:screet Miniature, d:fine Headset, d:vote Instrument and d:dicate Recording models with the optional MMP-G preamp. It comes packaged with one Micro USB-B to iOS (Lightning) and one Micro USB-B to PC / Mac (USB-A) cable.

d:vice is stated by the company to be compatible “with any iOS device, Mac or PC computer.” Leave it to the graybeard to find the incompatibilities. My second-generation iPad and Windows 10 laptop both, in unison, mocked my analog heritage. So, the first step down the d:vice path is to verify that your mobile device will play nicely with it.

I resolved my situation by borrowing a newer iPad, which interfaced just fine, and then I bounced through a few different recording apps to find the one I disliked the least. Also note that I’ve seen others reporting success with Windows 10, but my attention span maxed out well before reaching that goal. 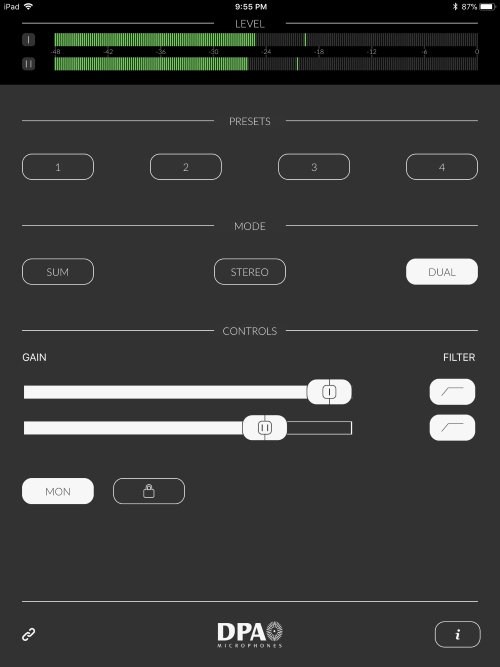 Despite its apparent simplicity, this little interface initially came across as intimidating. There are no buttons to push. No faders. Not even a power cord. It plugs in like a cell phone charger. The only audio connections screw on with MicroDot cables. I feared a Pandora’s Box of menus and third-party apps.

Fortunately, the setup was just about as simple as possible. True plug-and-play functionality is always appreciated when modern technology collides with motor-mouth curmudgeons. If there was anything worth griping about, I’d have already been dishing it out. In fact, the only real complaint I can manage involves extreme dislike of virtually every entry-level recording app in the whole world. All of them. So, only one fear was justified.

d:vice brings its own unique control app which was loaded and functional before I even realized it. The app functions much like the controls found on any decent preamp, with faders, high-pass, and sum/stereo/dual switches for checking your signal.

The ability to monkey around between dual mode and a mono sum while setting the mic positions through headphones is cool. Tablet mixing might bait a few more of us over once we experience it.

For applications, I ran d:vice through two different scenarios. First, a simple acoustic guitar in a reasonably quiet environment, and second, a live performance from a stage in the middle of the 2018 NAMM Show floor. 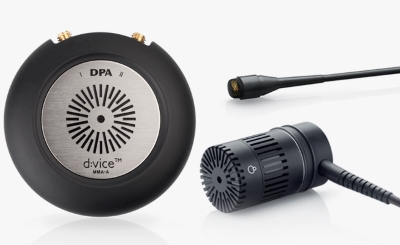 The thing I love most about recording acoustic instruments is hearing the sound of the player controlling the instrument. The sound of fingerprints gliding over the surface of fresh strings gives the recording life. I want to hear life. A solo acoustic guitar is a challenge without accompaniment to support it, and there’s nowhere to hide if it’s not right.

The subject here remains the d:vice, but the mics were spectacular. As I pushed into the somewhat restrictive gain, it never felt like the noise floor was climbing. If d:vice is adding self-noise to the signal chain, I never noticed it.

Now I’ve listened to my son’s guitar wrangling for several years. I know what it sounds like when he’s playing only a few feet away from me. The goal has been to verify the accuracy and rejection of this pocket-size recording system. For this portion of the evaluation, I was completely satisfied.

I wasn’t expecting Red Book standards to be met with a package that fits into a standard Crown Royal bag, but it was pretty impressive. Here’s one of the tracks captured with the d:vice and the 4060 mic during a rare moment of quiet in my living room. (Listen)

For the second evaluation, at the NAMM Show, Gabriel Antonini and Christopher Spahr of DPA took a few minutes to capture one of the bands (with mandatory crowd noise) during a NAMM performance at the DPA booth. Two mics were placed into something that loosely resembled an X-Y stereo configuration about seven feet in the air, front and center of the stage. The band was slightly amplified with headphone listening stations set up across the front for critical listening.

I don’t get to share those recordings for various reasons…

Gabriel chose to capture with the Filmic Pro app, which provided solid performance for a few clips. We also experimented with Garage Band and the standard onboard video app from an iPhone. After all was said and done, none of the third-party recording apps seemed to have been developed with the input of an actual recording engineer. Harsh? Yep.

But like cassettes of old, portability is the big asset. Without exaggeration, we went from setting up to packing up in less than 10 minutes. We captured multiple variations, with multiple apps, with negligible effort. The recordings produced stereo tracks with enough level for tweaking at any studio. I could imagine a simple songwriter demo turned into a release with these tracks as a foundation.

If your primary work involves portable recording, d:vice should be high on your wish/want list. Podcasters and YouTubers working from phones and tablets, seriously, take a close look at this unit. Broadcasters will likely find multiple uses for it as well.

Based upon this evaluation, I can state that the mics are of the highest quality and d:vice is of comparable quality, as well as extremely user-friendly. 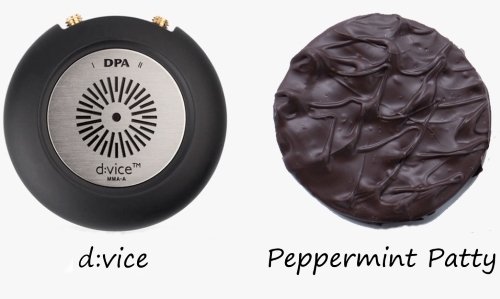 The support staff at DPA is among the most helpful out there, never leaving me hanging for an answer to one more stupid question.

The bottom line is that d:vice is a well-executed concept that’s quite well-suited for a lot of applications, and it seriously does resemble a peppermint patty… from a distance.

See what I mean?

Erik worked in a wide range of roles in pro audio for more than 20 years in a dynamic career that encompasses system design and engineering in the live, install and recording markets. He also spent a number of years as a church production staff member and Media Director, and as an author for several leading industry publications before joining the PSW team. His latest project is the WYWU: Working Your Way Up podcast. Reach him directly through the contact form at WYWU.org.
All Posts
Top Stories
Explore All Reviews