STX- and Sygma Series loudspeakers were the solution to St. Henry's to amplification woes.

For many smaller towns, the local church is a focal point for friends and neighbors to meet and keep in touch.

And for residents of Perham, Minnesota, St. Henry’s Catholic Church has long been just that.

The sanctuary’s soaring walls and high arched ceilings have made it a wonderful place to gather for traditional Sunday services.

But while the sanctuary’s classic, ornate architecture makes the choir and organ sound magnificent, it doesn’t do much for the spoken word.

In fact, the church has long struggled with the room’s reflectivity and its effect on the intelligibility of the Sunday sermons, much to the chagrin of church pastors.

When Fargo, North Dakota based Tricorne Audio was brought in to design a new sound system for St. Henry’s, the challenge was clear – create a system that could deliver intelligibility to all areas of the room, focusing the sound onto the seating areas without reflecting onto the walls.

The solution was found in Renkus-Heinz’s STX- and Sygma Series loudspeakers. The front of the sanctuary is covered by a single STX4/44 three-way enclosure and an STX2M/94 mid/high system, both employing CoEntrant CDT-1 mid/highs with Complex Conic Horns.

Musicians in the rear balcony areas are amplified by a pair of Sygma-Series SGX121 two-way 12-inch cabinets. QSC amplification drives the system, with DSP provided by Biamp Audia DSP.

As Tricorne’s Dallas Anderson explained, the STX speakers were ideally suited for the task.

“The pattern control of the STX is really excellent, and keeps the sound focused exactly where it’s needed,” he said. “For the balcony, the SGX boxes not only deliver intelligibility, but they’re very musical as well.”

Aesthetics was another important concern, and Renkus-Heinz delivered there as well. “It’s a very classic looking sanctuary, and putting in large loudspeakers simply wasn’t an option,” said Anderson.

“The STX and Sygma cabinets have such a small footprint, there’s hardly any visual impact at all. And it’s really impressive that we could hang such a small system so high up and still get such tight, focused coverage.” 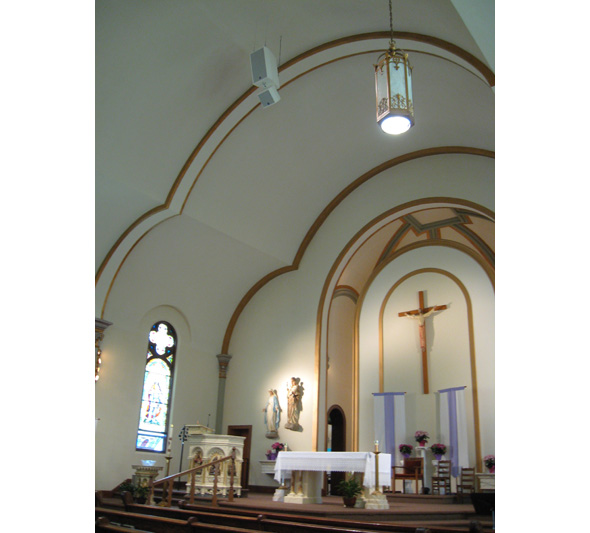