Reflections On Reflections: A Review Of Venue Acoustics

Having the right gear is important but knowing how to deploy it is vital to the end result...

I began writing this article a few months ago, as I sat in my office here in the Pacific Northwest, looking out the window at the rain making it obvious that, at least in this corner of the world, another summer had come and was long gone.

Another year of street fairs, festivals, music in the park, shed lawns, barbeque catering and tarping the arrays to keep them from being waterlogged by the imminent thunderstorm was in the books, and it was time to go back indoors for the winter.

And moving a sound system inside of an enclosed space presents a whole different range of acoustical challenges.

Something a younger practitioner of the art and science of live sound reinforcement had said caused me to think that perhaps a review of general acoustical principles was in order. As he walked the venue, he was experiencing lots of reverberation as well as some slap-back echo from a large concrete wall. He asked if we could “turn up the system so that the direct sound would override the slap.”

I explained to him that the reverb and slap levels would increase at a 1:1 ratio to the level of the energy generating it. The only ways to mitigate the echo were absorption, diffusion or changing the cluster geometry and using the directivity of the loudspeaker hang so that we didn’t excite the wall as much.

Much of the evolution in equipment, especially on the loudspeaker front, is intended to help us cope with difficult acoustic circumstances. New concepts in providing directivity seem to appear every week. Line arrays, beam steering, coverage mapping software and new horn topologies are just some of the tools that can be used to improve the system/room interface. But like any tools they must be used properly to provide maximum benefit.

Depending on the type of event it might also provide a perfect stereo (or surround sound) image at every seat, excellent intelligibility for spoken word, and seamless localization of the apparent audio source. It would not excite the walls, ceiling, balcony face or any other potential source of destructive flutter echo, but rather would tickle them just enough to create a nice, well balanced but not overbearing reverberant field. That’s not too much to ask, is it?

The key to taming the acoustics beast is to understand the fundamentals of the phenomena we are dealing with, how the physics work and then making informed choices on how to use the tools we have to get as close as possible to that idealized response. Reflected sound is one of the primary factors. This can be divided into two categories; reverberation and echo.

Reverberation is a sound field created by multiple reflections from the surfaces in a room. It is statistically diffuse which means that in theory it has the same frequency and time characteristics everywhere within the space. It is not location specific.

W. C. Sabine was a young Harvard physics professor in the late 1800s who did some of the pioneering work in analyzing and describing the characteristics of reverberation. His equations used the internal volume of the space, the internal surface area and the average absorption coefficient of the surfaces to predict RT60 when the room was excited by an omnidirectional source.

Later, scientists realized that other factors were also important in how humans perceive sound in a reverberant room, such as the ratio of direct to reflected sound and the time delay between the first arrival of a sound and the onset of the reverberant field.

A certain amount of reverb is usually considered pleasing for musical reproduction. The spectral content over time is one of the main factors that our ears use to define how a room “sounds.” An overly long low-frequency decay can create the perception of a room as “boomy” while a long high-frequency decay time will be perceived as “bright.” The absorptive and reflective characteristics of the surfaces in the room will contribute to this spectral balance.

The most common way of expressing a measurement of reverb time is RT60. RT60 is the length of time that it takes for the reverberation created by an impulse in the room to decay 60 dB at a given frequency. A higher volume of the initial impulse creates a higher starting point for the decay but does not change the time it takes to drop 60 dB or the frequency content of the reverb tail.

Usually (but not always) the reverb decay time at low frequencies is longer than at high frequencies. Figure 1 shows the RT60 response by frequency for a “typical” (if there is such a thing) live theatre. 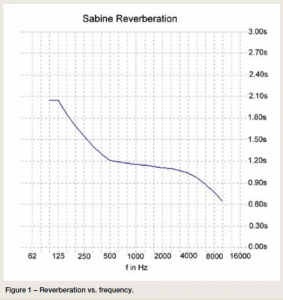 An echo is a distinct spectral reflection from a non-absorbent or non-diffusive surface. When an echo repeats because it is bouncing between parallel surfaces it is often called flutter echo. Unlike reverberation which is diffuse, echoes are typically localized. The delay time to the first reflection as well as its strength and frequency content can be dramatically different in different parts of a room.

Like almost every other facet of audio, it’s important to understand the wavelength component of frequency to understand how reflections behave. A surface’s size governs which sound waves will reflect and which will wrap around an obstruction.

For example, a 1000 Hz wave has a size of approximately 1 foot. If it encounters a one foot square surface that is reflective most of the energy will reflect back from the plane, and so will any higher frequency components of the sound that have shorter wavelengths. However, any longer wavelengths, say 100 Hz, will ignore the surface and continue on without reflecting.

Early & Late
For the sake of more easily understanding the characteristics of an echo, they’re often separated into the categories of early reflections and late reflections. There’s a marked difference in the way human auditory response perceives the two.

If an echo is within approximately 50 milliseconds of the direct sound arrival, it’s not heard as a separate arrival but it affects the perceived frequency response and the localization of the direct sound. This is widely described as the “Haas zone” or the “precedence effect.”

If a listener is in front of and equidistant from two identical sound sources playing at the same volume, he will hear a phantom image halfway between the two sources. If the sound from one of the sources arrives slightly before the other. the sound will be perceived to come from the first arrival.

Even if the level of the later arriving loudspeaker is louder, the ear will key on the first arrival as the sound source, although the localization may shift somewhat if the delayed source is much louder than the primary source (Figure 2). 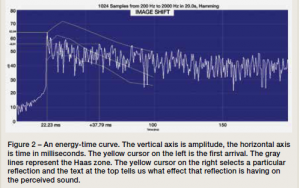 Although this trait can be used to our advantage when using delayed loudspeakers to maintain localization on the apparent sound source, early reflections from side walls or surfaces behind the loudspeakers can also cause anomalies in frequency response. When they recombine with the direct sound from the loudspeakers out of phase due to the path length differences, they cause comb filters.

Late arrivals are much easier to identify and their effects are much more obvious. After about 50 milliseconds if they are high enough in amplitude the reflections are heard as discreet arrivals. These echoes are very distracting for the audience and performers alike and can ruin an otherwise good mix (Figure 3). 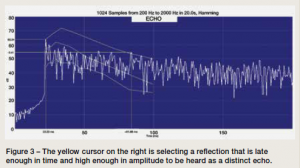 Since we are rarely in control of the acoustics in the venue, what can we do to minimize the destructive effects of reflected sound? The first key is to be aware of the nature of the reflected sounds.

We all spend countless hours mastering the intricacies of our digital console’s signal flow, programming up presets for our favorite processing and learning to use the predictive software that allows us to maximize the benefits of line array technology. Since the room is a large contributor to the final results of any system deployment, we should spend time learning about acoustics as well.

Eye On The Prize
Modern loudspeaker systems have given us great improvements in pattern control, and one of the most effective ways to deal with reflected sound is to create as little of it as possible by using the modeling tools that the manufacturers are providing to minimize how much we are “lighting up” reflective surfaces such as big flat back walls and balcony faces.

When using software to optimize coverage in the audience areas, create room boundaries as well so that you can see how much you’re exciting the beast. Many operators get great looking coverage maps on the seating areas but forget what the top half of the dispersion pattern is doing.

Remember, knowledge is power. Having the right gear is important but knowing how to deploy your equipment to create an optimal room/system interface is vital to the end result.

Bruce has been a systems engineer and front of house mixer for more than 35 years, and has also built, owned and operated recording studios, and designed and installed sound systems.
All Posts
PrevPreviousPowersoft Plays The Key Role In System For Jungla In Poland
NextMaking It Meaningful: Practical Applications Of Loudspeaker AnalysisNext
Study Hall Top Stories
Explore All Study Hall